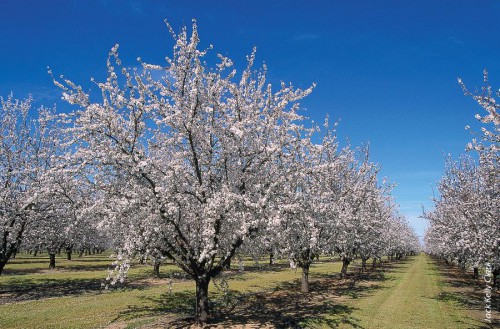 Reflecting on the state’s emergency water conservation rules, Gammon writes, “…while it’s true that many households and businesses are still wasting lots of water — and we need tougher rules to stop them — the true water wasters are large agricultural interests that are increasingly growing water-intensive crops, particularly almonds, in extremely dry sections of California, including the western San Joaquin Valley.”

Gammon continues, “Right now, California is producing far more almonds than state residents can consume. So much so that at least 70 percent of the state’s almond crop is now exported — much of it to China. In other words, we’re essentially exporting our water to China.”

Yes, it’s a fact. Almonds are a water-intensive crop. However, agricultural water use is not so straightforward. And recent history and data contradict Gammon’s claims that almond growers are big water wasters.

Recent history was laid out by Joe MacIlvaine, President of Paramount Farms – the world’s largest grower and processor of almonds – at a Public Policy Institute of California drought forum in January. He noted that, after the 1987-1991 drought, Central Valley agriculture realized that water would be the limiting resource for the foreseeable future.

“We took a number of actions to address that situation. First, we recognized that, in order to pay for an increasingly scarce water supply, we were going to have to farm more valuable crops…Second, we instituted a massive effort to research the most efficient way to use water…There has been an absolute transformation in irrigation practices in California.”

Almonds are a high value crop. Yolo County reported that almond meats were worth $4,205 per ton in 2013. Compare this to the county’s top commodity – processing tomatoes – which brought in $ 70.23 per ton in 2013. Even almond hulls pulled in $100 per ton that year.

Across the state, almond acreage increased from about 100,000 acres in 1964 to over 750,000 acres in 2011.  During the same time period – between 1967 and 2010 – the Department of Water Resources (DWR) reports that the total water applied to all crops in the state declined by 5.1 percent. This was largely the result of investments in irrigation efficiency.

Between 1991 and 2010, over two million acres moved from gravity irrigation (furrow and flood) to drip, micro sprinkler and subsurface methods. This included almonds. According to the California Almond Board, more than 70 percent of growers surveyed last year said they use drip or micro sprinklers. And more than 80 percent said they use demand-based instead of scheduled irrigation.

The Center for Irrigation Technology (CIRT) at CSU Fresno did an irrigation efficiency study in 2011. The authors wrote, “Claims of excessive irrigation inefficiencies, with resulting large volumes of new water available, are wrong…much of purported agricultural waste is recovered and reused by other agricultural interests, as well as by [municipalities and industry] or the environment.”

This is a reference to “recoverable” water – irrigation water that crops do not use and which becomes available for other beneficial uses. For example, let’s say a grower uses furrow irrigation, and the excess water percolates down and recharges a groundwater basin which is pumped to supply a small community. The grower changes over to drip irrigation, and the water is now mostly absorbed by the crop. This causes a deficit to the groundwater basin, which the community must make up from other sources. The result is no net new water.

The CIRT study estimated that, assuming high levels of investment, potential new water from agricultural efficiency would be 330,000 acre‐feet per year – 1.3 percent of the total amount used by agriculture. Although real water, it’s only about 0.5 percent of California’s total annual water use.

In other words, you can only squeeze so much out of water use efficiency, due to the recoverable water factor and because efficient systems are largely already in place. The only assured way to create lots of new water is to fallow land. Perhaps this is what Mr. Gammon is really after.

UC Davis estimated the total economic impact of the 2014 California almond industry at $21.5 billion, generating around 104,000 jobs. The same study called the industry “especially important to the economy of the California Central Valley.”

Almonds can cover the rising costs of water, and this has been an incentive to plant almonds for decades. The industry has invested in water conservation and will continue to do so into the future. This doesn’t sound like waste. It sounds like a vicious cycle.

How to price water to reflect its true cost is the real public policy question facing California. Perhaps we’ll reach the point where it’s not worth it to farm almonds in large parts of the San Joaquin Valley. But it won’t be because farmers failed to use water as efficiently as possible.

Share:
Tags:AgricultureAlmondsEnvironmentFood IssueLeanna SwehaState of California
Previous : First, Do No Harm
Next : Inmates in San Francisco Forced Into Gladiator-Style Fights

14 thoughts on “Lawns versus Almonds – Can’t We All Just Get Along?”