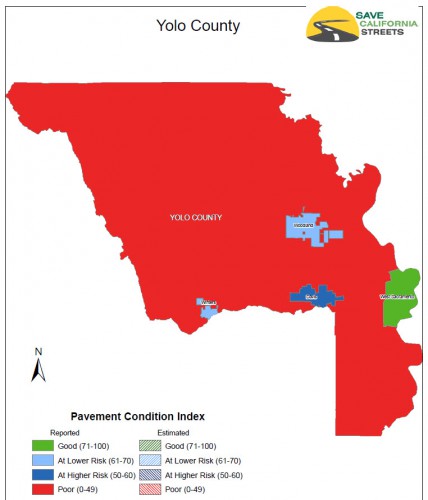 In a release on Monday, the League of California Cities stated that it has “engaged in numerous discussions with state and federal lawmakers about the condition of California’s local streets and roads.”

The discussion, based on the most recent biennial Local Streets and Roads Needs Assessment, which was released last October, showed that the average rating in California was 66. Locally, however, Davis was at 62 and rural Yolo County was already in the red.

The survey uses a four-tiered Pavement Condition Index (PCI) scale from zero to 100 to assess the conditions of local roads within California’s 58 counties.

“At first glance, the fact that the on-average rating for California’s local system is 66, just four points under what the study deems as good condition, does not appear to be alarming,” the League stated. “The reality is that the local roads are on a precipice.”

They continue, “This illustration shows very plainly the costs to maintain roads (per square yard) over the course of this life cycle. When conditions dip much farther under current conditions, the cost to repair and maintain these roads dramatically increases. For example, roads with a PCI ranking between 70 and 50 cost $15-$20 per square yard to maintain, but the amount doubles to $30-$40 for road conditions with PCIs in a range of 50-25.”

The League concludes, “The 2014 Local Streets and Roads Needs Assessment found that currently local agencies receive just half the revenue needed to maintain the local system. Investments must be made to the system that comprises more than 80 percent of California’s roadways because time is running out for the roads beneath our feet and wheels.” 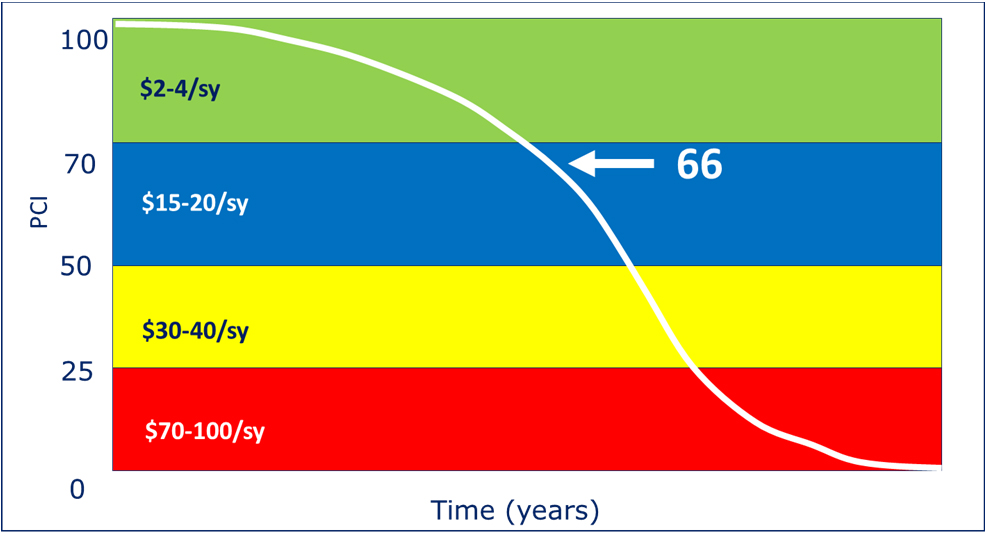 The report is a wakeup call, not just to Yolo County but to the state. As they noted, “The results are alarming. The condition of the system that makes up more than 80 percent of California’s roadways is on the path to failure. The biennial survey confirms pavement conditions are declining and finds that existing funding levels are insufficient to properly fix and/or maintain streets, roads, bridges, sidewalks, storm drains and traffic signs.”

They add, “Deferring this crucial work,” the report predicts, “will likely double the cost of repairs in the future, and impedes efforts to reduce greenhouse gas emissions and other air pollutants.”

The report notes, “California’s local street and road conditions continue to decline. The Needs Assessment uses a scale of zero (failed) to 100 (excellent) to rate pavement condition. Conditions have deteriorated since the first survey six years ago when the statewide average was 68. Today it’s dropped to 66, which falls into the at risk category. Of California’s 58 counties, an alarming 54 have streets and roads that are either at risk or ranked in poor condition. In 10 years, it is projected that 25 percent of local streets and roads will be ranked poor.”

But as Save California Streets points out, “This is not a California only problem – it’s a national crisis.” They continue, “At the federal level, the Highway Trust Fund faces insolvency. Federal gasoline taxes have not kept pace with inflation and rising construction costs. Nor has the system for charging road users been updated to account for alternative fuels and increasing fuel efficiency. The same is true for the state’s gasoline taxes. The base 18-cent excise tax, last adjusted in 1994, is now only worth 9-cents when adjusted for inflation and fuel efficiency.”

Save California Streets notes, “Californians need to work together to find ways to fund local streets and roads, and push state and local governments to establish sustainable transportation revenues.”

But Davis cannot afford to wait until that money becomes available. However, previous efforts to generate additional revenues for road repair through a parcel tax appear to have at least stalled, with no public discussions in recent months as we wait for a full assessment of city infrastructure needs.

Share:
Tags:League of California CitiesLocal Streets and Roads Needs AssessmentPCIRoad Maintenance
Previous : Analysis: No Clear Pattern in Davis’ Uptick in Murders
Next : Analysis: The Overall LCFF Funding Scheme and How DJUSD Fares Under It