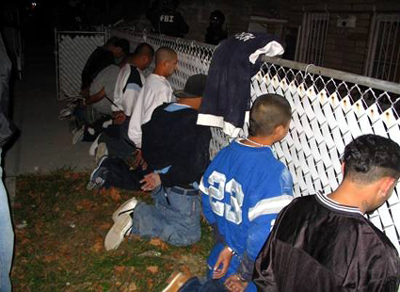 Previously, the Vanguard talked to one of the victims of an alleged gang attack and robbery, where four young Latinos ended up being arrested for allegedly beating and robbing a Woodland man, stealing his Cheetos, Pepsi and his bike. They were charged with second degree robbery, assault with great bodily injury, and a gang enhancement because someone yelled a gang slur.

However, the case suffered from serious witness identification issues from the start. Store video shows two of the defendants, Jose Jimenez and Juan Fuentes, running out of the store, but no evidence that they were involved.

After three trials, only Juan Fuentes was convicted of the robbery. In February of this year, Judge David Rosenberg sentenced him to 16 years in prison.

The Vanguard spoke this week to Cindy Fuentes, the mother of Mr. Fuentes.

“I was very disappointed in the whole case because I felt like there was no crime that actually occurred,” Ms. Fuentes told the Vanguard. “The bike was not found on my son.”

She said that the bike was actually found at an apartment complex the next morning, in the opposite direction from where Mr. Fuentes was arrested. There was a video of a guy who looks like him on the bike that passes by while they were being arrested, “but that guy is wearing long socks. My son’s arrest picture, he has short socks.”

Ms. Fuentes said that, while the guy in the video kind of looks like him, “Somebody doesn’t change their appearance by changing their socks.”

His mother is convinced that they caught the wrong person – if there was even a crime. “I felt like it was just a witch hunt. I kept waiting for the judge to throw the whole case out.”

“I didn’t hire a private attorney because I’m thinking this is just ridiculous,” she said. But the case kept going first to trial, then a second trial, and then a third trial.

“I was like, are you kidding me?” she said. “I kept waiting to wake up from a bad dream. How could he be convicted of something he didn’t do?”

Juan Fuentes, the only one of the defendants convicted of the robbery, was sentenced to four years for that crime, but he received another 12 years as part of his prior strike.

Mr. Fuentes had a prior strike from a conviction when he was 15 years old, and gang enhancements.  He was convicted of an auto theft at that time. He served time in juvenile detention and then a group home until he was 18.

Defense Attorney Bob Spangler, representing Mr. Fuentes, pled with the judge to disallow the previous strike during sentencing, but it was quickly denied, although Judge Rosenberg did not feel this conviction was worthy of second strike.

Mr. Fuentes got accepted to American River College that coming fall when this happened. Four days before the incident she had moved to Sacramento.

Ms. Fuentes said that her son was out there that night, however, as soon as they started fighting, he ran, not wanting to get back into trouble. He was on probation at the time and preparing to move to Sacramento.

She said that night he was out with his friends, “and he had not been out with these guys in years.”

Ms. Fuentes said that she got the call from him at the county jail. She asked him, “What happened?” He responded, “I don’t know.”

Ms. Fuentes said that her son rides his bike all over town, he doesn’t drive. She felt like if they saw him on a bike in the video, it was probably his own bike. But she’s convinced that wasn’t him due to the fact that the rider was wearing long socks in the video, but her son had short socks when he was arrested. The arrest happened literally minutes later, and he wouldn’t have had an opportunity to change his socks.

“Everything else matched but the socks,” she said. The quality of the video was not good enough to identify him by his face. “He had no bike on him when he was arrested.”

She said, “If someone’s hiding in the bush, there’s going to be a bike around him.” However the bike was found on the other side of 7-Eleven from where Mr. Fuentes was found and arrested.

The other defendants were convicted of the gang charge alone.

But during testimony and in written reports, police identified these four men, alleging that on the night in question that both victims, Mr. Nichols and Ms. Beatty, had identified them from a field line-up and even a particular haircut that one of the defendants wore at that time.

Although the two victims were reluctant to testify against the four young men each time, they both reiterated, “No, I am not afraid of retaliation,” during trial testimony.

Mr. Nichols at one point stated, “I do not want to see them go to prison, I would feel bad sending kids to prison. I could not see that night, I was too busy fighting.”

Ms. Beatty stated on the stand, “The cops put words in my mouth.”

The Vanguard, as stated above and reported in the March 12 article, talked to Ms. Beatty about the incident.

Cindy Fuentes said that the attorney is going to file for an appeal. But that process is long and filled with uncertainty.

The Vanguard attempted to talk with Mr. Fuentes’ trial attorney, Robert Spangler, but did not receive a return phone call.

Antoinnette Borbon contributed to this article and the previous article.

16 thoughts on “Mother Talks About the Woodland Gang Case”