Back in November, when an overwhelming number of residents expressed concerns about the safety risks involved with the parking configurations along B Street between 7th and 8th, the city council pulled back to take a more community dialogue-based approach.

Now staff has returned, recommending an option that includes restriping B Street from 7th to 8th Streets and prohibiting parking from 7th to 14th Streets. Staff would be directed to return with an Ordinance that removes parking on B Street between 7th and 14th Streets.

The cost of the project would be about $17,000, which includes both staff time and infrastructure improvements. The funds are available in the current year’s budget in the Transportation Division’s Signing and Striping Program.

Back on November 18, the staff was directed by council to hold a “professionally facilitated public meeting to discuss issues along B Street pertaining to bicycling and the impacts that parking, yard waste piles and organics containerization present to this mode of transportation.”

The purpose of that meeting “was to have an open dialogue to try to break down the barriers that have been put up between the different stake holders and to try to have a discussion about concerns and possible solutions.”

The purpose was not consensus but rather “to provide a better understanding of the different perspectives, what needs, desires and concerns are involved in each of the scenarios and to try to develop some mutually agreeable solutions.”

The meeting, held January 27, was attended by 32 people and included 4 residents of B Street and 28 people with bicycle-related interests.

B St represents a unique challenge as it carries a high volume of traffic, and it is one of the few north-south connections between downtown and major community facilities. It also serves a number of public facilities, including four schools, two churches, the city, county and school district offices, the Veteran’s Memorial and the County Library.

At the same time, it is a residential street and there are concerns expressed over the safety of bicyclists due to the effect of parking, yard waste piles and containers all vying for the same space within or adjacent to the bike lanes; and the potential impact of the loss of parking from the residents’ perspective.

There are two key roadway sections. 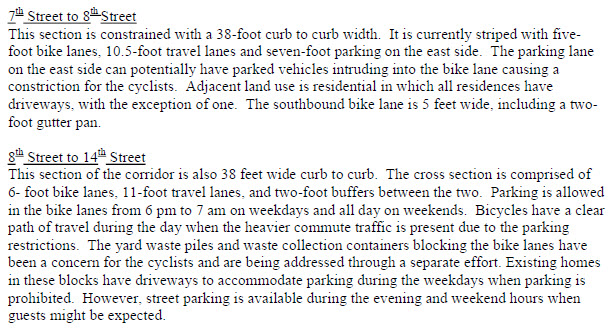 Option 1 calls for the restriping of B Street from 7th to 8th streets to the same configuration as exists north of 8th Street: “11’ travel lanes, 2’ buffers and 6’ bike lanes. Full removal of parking from 7th Street to 14th Street, which removes the conflicts between parked vehicles and bicycle travel entirely.”

Staff writes, “This option would have the greatest impact to B Street residents by displacing existing parking at all times. The loss of parking between 7th and 8th Streets could be absorbed within the adjacent Old North Davis Neighborhood, N Permit District, which does have marked permit parking spaces, but also has available unrestricted parking.”

The President of the Old North Davis Neighborhood Association sent a letter to the city indicating their support for the inclusion of these residents into the N Permit District should Option 1 be implemented.

For the section of B Street north of 8th Street, parking would be prohibited at all times. Staff writes, “As there is currently unrestricted parking on the streets east of B Street, there is available parking. In addition, all residences have driveways and all other facilities have parking lots.”

Staff is recommending this option, but Option 2 would “Restripe B Street between 7th and 8th Streets to the same configuration as north of 8th Street to eliminate the parking lane, widen bike lanes and add bike buffers. Extend existing parking restrictions from 8th to 14th Streets south to 7th Street. Allow parking in the bike lane on weekday nights and weekends.”

Staff writes, “This option would remove parking during the weekday daytime hours, when bicycle traffic is highest, but would not during the evening and weekend hours. With this option there would be impacts to parking, however all but one residence along this block have driveways, therefore the daytime parking restriction appears to be less of an impact to the residents, while still allowing for evening and weekend parking to accommodate resident and guest parking.”

For the section between 8th and 14th Streets, the existing parking restriction from 7 a.m. to 6 p.m. would remain, allowing for a clear path of travel during the day, however allowing for resident parking at night and on the weekends.

There is a third option, as well, which would maintain the existing striping and parking configurations.

At the November meeting, a number of public commenters spoke.

Michael Bisch, of the Davis Downtown, said he bikes every morning in Davis with his seven-year-old. “I would most definitely not take my kids on B Street on bicycles between Seventh and Eighth with the cars parked in the way.” He added, “It is kind of a harrowing experience when there’s a bunch of stuff sitting in the bike path.”

Mont Hubbard, president of Davis Bicycles!, said they favor the option to restrict parking at all hours. He said, “We also recognize… it’s really better to deal with the street in a holistic way.” He disagreed with staff’s assessment that B Street between Eighth and Fourteenth was functional for all users. He stated, “It is striking the difference between staff’s assessment and the feelings of the users of the street.” He said they have conducted their own survey, and the vast majority of their 186 respondents felt that “B Street was a serious safety problem. 78 percent said cars parked in bike lanes are an impediment to safety. That’s only true from Eighth to Fourteenth right now.”

Darell Dickey added, “Council should eliminate all parking from Seventh to Fourteenth to protect our vulnerable users.”   He asked, “How does parking in the bike lane anywhere, at any time, fulfill the council goals?” He added, “How does parking in the bike lane conform to the vulnerable user clause that’s in the transportation element of our general plan? That clause says, where limited street space exists, priority should be given to non-motorized modes to protect the safety and comfort of those most vulnerable users.” He noted that this is not just safety, because people who are not comfortable are not riding in those sections.

Share:
Tags:B StreetBicyclingBike LanesSafety
Previous : My View: Gang Case Represents One of Worst Miscarriages of Justice We Have Seen in Yolo
Next : Former Assemblymember Yamada to Run For Senate