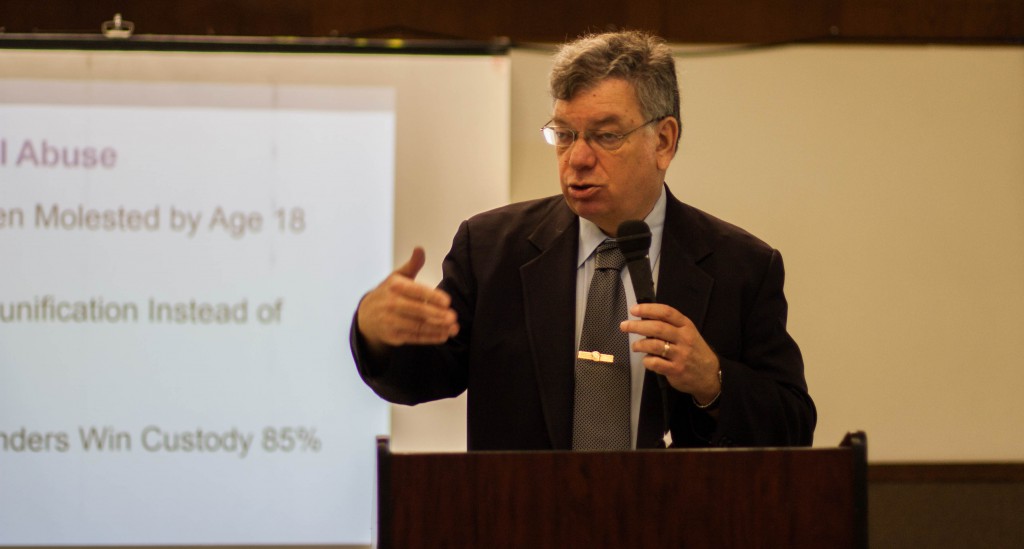 Barry Goldstein, author of the book, The Quincy Solution, was the keynote speaker on Sunday at the 21st Annual Northern California Child Sexual Abuse Awareness Conference. He argued that we can “save $500 billion every year by implementing the proven practices of the Quincy Solution.”

In part two of our coverage, Mr. Goldstein lays out some alternative approaches in addition to the Quincy Solution, which he believes can help reduce domestic violence.

Mr. Goldstein noted that many people are concerned by the fact that there are too many people in jail, “and here I am advocating strict enforcement of laws.” He argues, “The reality is that this is going to result in less people in jail rather than more.”

In Quincy, the media got into the act. For instance, they published the pictures of men who had warrants out which resulted in pushing the police to make the arrests. He said, “The Boston Globe covered a number of stories about Quincy which sent the message that you don’t commit this crime in Quincy.”

He argued, “Remember, men are able to control their behavior. If they think there will be consequences for them, they don’t do it.” So he said, “When they found out there were consequences in Quincy, they stopped doing it.”

The other side of this equation is that “children who witness domestic violence are far more likely to grow up and commit other crimes.”

The impact on the community was they had a huge reduction in domestic violence and big savings of money. Unfortunately the judge, who was instrumental in implementing this, retired. The DA, Bill Delahunt, became a congressman, and the crime rate went back up.

One thing that Bill Delahunt noted is that some victims would stop cooperating when the father sought custody of the children. At the time, however, that was a fairly rare tactic. However, “Today it is a standard tactic to seek custody as a way for abusers to regain control over their victims.”

He argued, “One reason the DV homicide rate has gone up after years of going down is the result that the success that abusers have had in manipulating the custody courts.”

Learn more about the Custody Courts at the Vanguard’s May 9 event: “Family Court Crisis: Who Will Protect The Children”
For more information, click here

He said that in order to make this successful, we have to change the custody court system. As a result, what is now included within the Quincy Solution is the Safe Child Act.

Mr. Goldstein lays this out more fully on his website, and some of the provisions include that the primary concern of child custody decisions “must be to provide complete safety when determining the best interests of the children.” It also requires that claims be evaluated by professionals with appropriate levels of expertise and use valid scientific research to inform its decisions.

He said on Sunday, “In all custody and visitation decisions, the health and safety of children must be the first priority.”

He argues that this “takes away the discretion for judges to use other factors that are less important.”

Mr. Goldstein explained that, in some states, this act has encouraged judges to get the training that they need to understand the impact of their decisions on the health and safety of the children.

Mr. Goldstein said that the health care estimates for domestic violence are based on the ACE Study (Adverse Childhood Experience Study). He said the fundamental finding is that “children exposed to domestic violence, child abuse, and other traumas will have more illnesses and injuries and live shorter lives.”

The study “is one of the largest retrospective studies to examine the links between traumatic childhood experiences and current adult health and well-being (Centers for Disease Control and Prevention [CDC], 2012). Over 17,000 adult patients receiving health care at a major health care organization completed confidential ACE surveys. The study sample was a cross-section of middle class, ethnically diverse, women and men, ranging in age from 19 to over 60 years (CDC, 2012).”

The study estimates that of the 76 million children living in the United States, it is estimated that 46 million can expect to have their lives affected by violence, abuse, crime, and psychological trauma (U.S. Department of Justice, 2012). And around 15 million children each year will witness domestic violence.

The study finds, “Even as bystanders to domestic and family violence, children may experience psychological traumatization as if abused themselves.”

Barry Goldstein posed the question – how is it that the father, yelling and screaming at the mother, can result in the child suffering cancer or heart disease, thirty years later? That doesn’t seem obvious at first glance, he said, but it is what is happening.

However, “The essence of domestic violence is that the abuser uses various tactics to scare and intimidate and coerce the partner to do what he wants. That fear is what causes the harm, based on the ACE research.”

“Living with fear causes stress,” he explains. “Living your life with an abuser, you never know when he’s going to act out abusively. That is an enormous amount of stress that causes a lot of harm.”

“Stress is implicated in causing or exacerbating many chronic illnesses,” he said, noting it can also undermine the immune system, it can lead to eating disorders, and it’s related to mental illness. Moreover, “These problems interact with each other to multiply the harm exponentially.”

Therefore, he argues that this exposure to domestic violence is fundamental to people’s health.

This also has other implications. One is that because the disorders show up years later, it is often difficult to diagnose as the doctor may not be looking thirty years into the past to seek out a cause. The result is that people get accused of being hypochondriacs and malingering.

Mr. Goldstein reiterated, “You don’t need a physical assault to create the harm to children. Too often the courts are only interested in physical abuse. But it’s the fear and stress.”

He argued that advocates need to present in court the patterns of coercive and controlling behavior, most of which are legal but they’re harming children.

He said the most important thing that we should be asking for these children is whether we prevent the abuse and the stress that results in a shorter life. He said that we can do it, but there are two things that we have to do.

The first thing is, “The safe parent has to have control of medical decisions because the child is probably going to need therapy and the abuser is not going to want the child in therapy and reviewing what he did. There are medical treatments that are available.” These include exercise or meditation – things that will reduce stress.

The Saunders’ study from the US Department of Justice confirmed what protective mothers have been complaining about, that “most evaluators do not have the needed training and expertise in domestic violence.”

For instance, Mr. Goldstein writes, “Many custody courts are used to relying on a psychologist or other mental health professional even when there are no credible mental health issues. With rare exceptions, domestic violence is not caused by mental illness.”

The implication is that, without the training, many professionals end up disbelieving true allegations of abuse. This leads to the court to give custody and visitation to dangerous abusers.

One of the things Mr. Goldstein discusses in the third part of his talk is that, despite common perception, false allegations are exceedingly rare.