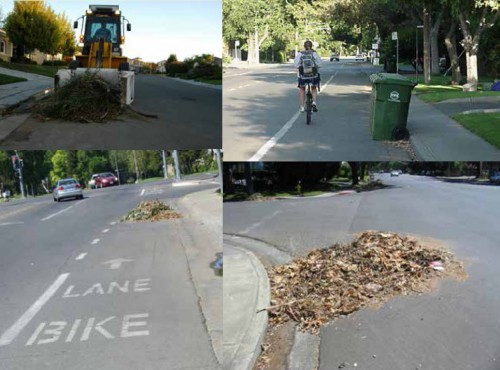 When I first moved to Davis, I had no car, so I went everywhere by bike. I looked forward to biking in Davis. Growing up in San Luis Obispo, I used to bike to school, as well, all through college. However, biking in San Luis Obispo was a grueling experience. As I am fond to point out, I had to bike uphill both ways (no joke there).

While Davis has the reputation of being a bike friendly town, I was perplexed by the fact that one could not really bike through town on Fifth Street. I was more perplexed when I encountered frequent blockages of the bike lanes, especially on Arlington Blvd., by greenwaste.

One day after having to veer around a big pile into the traffic lane, I decided to call the city to complain about the debris in the bike lane. I was told that people were allowed to dump their greenwaste on the side of the road whether it blocked the bike lane or not.

The first efforts, that I recall, at containerization involved a pilot project on a few streets – a project that was quickly discontinued. People apparently liked being able to throw their yard waste in the streets. I had grown up in a community that has containerized its yard waste for decades.

Still the level of  absurdity on Tuesday blew me away. For some, it appears, the act of dumping their greenwaste in the streets was the Davis Way. One person took pride in the fact that the claw was apparently developed in Davis by a Davis resident.

One lady said her family refers to the claw as “Snuffleupagus,” and Mayor Dan Wolk told the council and members of the public, “I grew up in this community, I love the claw.”

Really? People have an emotional attachment to “the claw”?

Darell Dickey’s thoughts mirror my own. He said, “Before moving here, honestly I had never seen greenwaste piled in the street and the first question I had for my real estate agent was [whether] this was like a once in a year thing, we don’t throw trash in the street… He said, no this is one of the great things about Davis, we pile our stuff in the street. I was shocked.”

Mr. Dickey told the council that he still uses a cart. “I have to then dump the thing in the street which is an extra step… I see my neighbors doing the same thing too, in fact that ones that wish to continue dumping in the street, they fill a container first and then they dump it in the street.”

I understand that Davis has a lot of trees, but so do other communities that containerize. Certainly the city of Sacramento has trees, as does Woodland. As Mark Murray put it on Tuesday, Sacramento came up with a good compromise but the Davis staff has come up with an even better compromise.

“I frankly think your staff has come up with an even better compromise of keeping the claw, keeping putting yard waste in the street once a month,” he said. “With the legislation being passed, there isn’t going to be any yard waste going to landfill by the commercial sector, by the lawn and garden services… because we don’t want that organic material going to landfill.”

That’s the point that I think that gets missed. Davis has to deal with storm water discharge requirements which are imperiled by the weekly presence of green waste material in the streets that end up in the storm drains, as the claw invariably missed portions of the debris.

The issue that Mr. Dickey pointed out on the Vanguard is that he does not “dislike the claw. In fact, I can think of all manner of uses for that device… and on-call pickups, and quickly moving wayward piles out of our travel lanes are a couple of them. The claw is great. What I am passionately against is using our streets for storing endless piles of refuse. It may confuse some to realize that I’m pro-claw, and anti-pile.”

For me I neither like nor dislike “the claw.” In fact, I never gave a second thought to the claw until Tuesday night. Apparently I’m missing the ball. The claw is apparently an iconic image in Davis, part of our identity, that must be protected at all costs.

I can see the campaign now. The hundreds of people signing petitions, putting the matter to the ballot, flooding city hall.

Okay, it was just six people at city hall on Tuesday who spoke against the ordinance. But even those who believe this was a good compromise had to proclaim their love for the claw.

It just seemed absurd. We face critical issues in Davis – a still potent fiscal crisis, crumbling roads, flagging revenue, a tragic incident. What got people to city hall on Tuesday? The claw.

For me the claw is a tool. It probably is a useful tool, but throwing greenwaste in the street is unsightly, it’s messy, and it is harmful to the environment.

Councilmember Lucas Frerichs noted that we have been talking about this for a long time and the proposal has evolved over time. “Early on it was the discussion about removing the claw altogether and that clearly was unacceptable to the community,” he said. “I appreciate that so we made adjustments to the proposal.”

Mr. Frerichs noted the importance of reducing waste, and improved storm water qualities were important components about this. He said, “I think the overall proposal represents a compromise ‒ it’s sort of the Goldielocks getting the porridge not too hot, not too cold, getting it just right.”

For me, we haven’t gone nearly far enough. The inability to throw greenwaste on the street is not quite the emergency that some people would have it. Hopefully this is just the first step towards sanity, but after hearing about the love for the claw on Tuesday night, I have my doubts.

Share:
Tags:City of DaviscontainerizationDan WolkEnvironmentgreenwasteLucas FrerichsOrganics ProgramThe Claw
Previous : Commentary: How Potent An Issue Will Water Be for the Innovation Parks?
Next : Police Release 911 Recording of Murder-Suicide

56 thoughts on “Commentary: The Theatre of the Absurd”