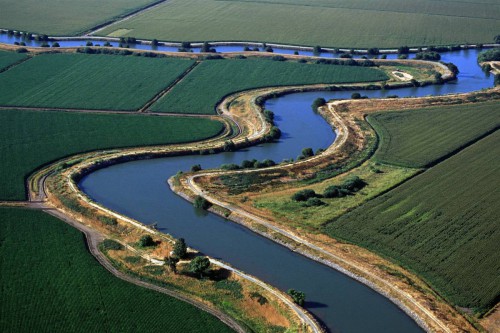 An article last week on Fox News called this is a “man-made disaster,” arguing “the Golden State’s misguided environmental policies allow much-needed freshwater to flow straight into the Pacific.”

They write, “In an average year, California gets enough snow and rain to put 200 million acres under a foot of water, but environmental opposition to dams over the last several decades has allowed the majority of the freshwater to flow into the ocean, even as the state’s population exploded to nearly 40 million people. The current drought has left farms parched and residents under strict water consumption orders, but some say it didn’t have to be that way.”

“This is a man-made disaster,” said Bonner Cohen, senior fellow with the National Center for Public Policy Research. “Southern California is an arid part of the world where droughts — even severe droughts — are commonplace, and knowing this, you’d think the government of California would have included this mathematical certainty in its disaster preparedness planning, but the government has done nothing, not even store rain, as the population has continued to grow.”

While the Fox News article goes on to question the effectiveness of environmental policies, it does lead us to the key question, which is whether California’s focus now and in the future should be on maximizing the collection of water – regardless of possible environmental implications.

The Sacramento Bee editorial earlier this week suggests that Governor Brown “should keep in mind that it won’t be acceptable to give up its environmental goals.”

Writes the Bee, Governor Brown needs to demonstrate to “the public that his approach won’t degenerate into a water grab for Southern California and the Central Valley.”

They note that the Bay Delta Conservation Plan (or BDCP) had two goals.  First, a supply of water for Southern California and the Central Valley while, at the same time, restoring “the Delta ecosystem to save endangered species, such as salmon and Delta smelt.”

The Fox News article, citing UC Davis biologist Peter Moyle, argues that, while the release of the water to the delta was supposed to save endangered fish populations, “so far the fish population has decreased.”

“Prepare for the extinction of the Delta Smelt in the wild,” UC Davis fish biologist Peter Moyle said. “The population today may be too low to sustain itself,” Professor Moyle said. “Fish ready to spawn have to find one another in a big area. If spawning is successful, there have to be enough eggs and larvae that some individuals survive to become the next generation of spawners.”

Jim Burling of the Pacific Legal Foundation said that “while water diversions have not helped endangered fish populations, the policies are devastating to people, produce and the economy.”

“The plan is not doing anything for the fish and causing a lot of pain for farmers and farm workers,” he said. “The impact of these policies on people should be considered.”

However, the full plan hasn’t been implemented.

According to the Bee, “The proposition was that two 40-foot-wide, 30-mile-long tunnels, built under the Sacramento-San Joaquin Delta, would do a better job of moving water from north to south, and mitigate the damage from pumps that reverse the flow of the Delta and kill fish.

“Meanwhile, habitat was to be restored via a 50-year plan for conservation. Water agencies would help pick up the tab, because, with the restoration in progress, the variable flow they get now – tightened by federal agencies and courts any time an endangered fish appears to be threatened – would be less prone to interruption.”

However, Governor Brown wants to uncouple the two goals, “because the state hasn’t been able to convince federal biologists that its plan will restore the fish and wildlife that are now struggling for survival in the Delta. And if the biologists are unconvinced, the feds won’t issue the 50-year permits.”

Politics are at play, and “[r]estoring the Delta has been a critical selling point to many Northern Californians, who helped defeat a 1982 plan to build a peripheral canal there. Water agencies also need to see that the new plan will be worth their while.”

The Bee further notes, “The Brown administration says it is deeply committed to the co-equal goals, but separating the twin tunnels from habitat restoration would create a path to successfully implement the project.”

The federal government is not convinced and they have “severely criticized the Bay Delta Conservation Plan.”

The EPA said that “the plan would harm water quality and aquatic life, and increase pollution.” Instead, they recommended an alternative plan that would allow for “greater freshwater flows through the Delta.”

However, the Bee notes that the National Marine Fisheries questioned whether the plan would help fish populations recover.

The Bee notes, “Scientific analyses have been unable to predict the health of the Delta in the next 50 years, with variables of climate change, sea level rise and seismic activity. As some fish populations drop to dangerous levels, assessing the Delta’s future has proven to be nearly impossible. But by shortening the time frame from 50 years to 10 years, analyzing the tunnels’ impact would be easier to foresee.”

The Bee argues, “The Delta’s fragile ecological health is clear; we don’t need to parse its declining state with more studies. But a focused, coordinated approach to restore habitat to help endangered and threatened species recover should be part of the governor’s new plan.”

In the meantime, we would like to see the formulation of a longer term water strategy for California.  We have to assume that the drought has the potential to last far longer than recent previous droughts and, if such a dire forecast proves unfounded, at least we will have the plan in place for the next serious drought.