Trains blew through the Davis Amtrak Train Station during a 45-minute press conference. While these trains were not carrying crude oil, it illustrated the close proximity of the rail lines to the everyday bustle of life, as well as to the homes of thousands in Davis and communities like Davis around the region and across the country.

The press conference was called to urge the implementation of stronger safety standards for hazardous material transported by rail, especially Bakken crude oil. Sensitive infrastructure and 16 million Americans are near these railroad shipment lines.

“Every day we delay the implementation of a stronger safety standard for the transport of Bakken crude oil-by-rail, lives and communities are at risk,” Congressman Garamendi said. “We need the federal government to step in and ensure that the vapor pressure of transported crude oil is lower, making it more stable and safer to transport. We also need to upgrade and ensure the maintenance of rail lines, tank cars, brake systems, and our emergency response plans. My legislation to lower the maximum Reid vapor pressure to 9.5 psi in Bakken-by-rail transport, H.R. 1679, is meant to jumpstart this conversation before it’s too late.”

Mr. Garamendi warned that if one of these trains should derail, “you’d wipe out downtown Davis and possibly hundreds of people.”

“The railroad comprises the geographic and cultural heart of our community – in fact, it is the reason Davis is what it is today,” said Mayor Dan Wolk. “That is what makes this issue – the possibility of so many tank cars filled with Bakken crude oil passing through our community each day – so concerning to us.”

This is not an academic exercise. Valero is proposing the “Crude by Rail Project” which would allow the refinery to receive a larger proportion of its crude oil deliveries by railcar. The Benicia EIR has proposed upgrading of the rail terminal at the Valero refinery to take in as much as 70,000 barrels of crude oil a day.

Last summer, SACOG (Sacramento Area Council of Governments) warned that Benicia “is failing to acknowledge the risks of explosions and fires that could happen if the Bay Area city approves Valero’s plan to run crude oil trains through Northern California to its refinery.”

In June, Benicia’s EIR downplayed the risk of accident, concluding, “The risk of an accidental release of crude oil from a train traveling from Roseville to Benicia is considered insignificant.”

But local leaders are concerned. Yolo County Supervisor Don Saylor, speaking on behalf of SACOG, warned that as many as 5000 Davis residents are in close proximity to the rail lines and could be impacted by a derailment, spill, or explosion.

“It is essential that the federal government act quickly and comprehensively. Public safety is paramount for the half million residents of our region who reside in close proximity to rail lines,” said Supervisor Saylor.

“While oil by rail may provide some significant economic benefits for our county, we must be wary of its potential harms. As elected officials we must ensure that the necessary safeguards are in place to regulate this operation and protect our communities,” said Supervisor Skip Thomson.

In July 2013, a crude-by-rail derailment in Lac-Megantic, Quebec, Canada, killed 47 people. Several major accidents have occurred in the United States since then, including in Virginia, West Virginia, and Illinois. Fortunately, these accidents occurred in locations sufficiently far away from population centers that fatalities were avoided. Had they occurred in the middle of a city like Davis, a disaster on the scale of Lac-Megantic, or worse, could occur.

However, a recent accident damaged just two cars in the derailment, but another 13 cars were destroyed in a subsequent explosion.

In a February 27 letter to Timothy Butters at the U.S. Department of Transportation and Sarah Feinberg, who was at the press conference, Congressman Garamendi together with Congresswoman Doris Matsui wrote that “despite increased train car derailments and an overall delay in the issuance of oil-train safety regulations, the Department of Transportation (DOT) may be considering a revision that could delay the deadline for companies to comply with important safety guidelines, including upgrading CPC-1232 tank cars to new standards. Considering the frequency by which derailments are occurring, we believe that other measures.”

They wrote, “Serious crude-carrying train incidents are occurring once every seven weeks on average, and a DOT report predicts that trains hauling crude oil or ethanol will derail an average of 10 times a year over the next two decades, causing billions of dollars in damage and possibly costing hundreds of lives.”

HR 1679 “would prohibit the transport of Bakken crude-by-rail unless it has a maximum Reid vapor pressure (RVP) of 9.5 psi. This is the maximum volatility permitted by the New York Mercantile Exchange (NYMEX) for crude oil futures contracts. For context, a recent literature review by Sandia Labs indicates that the North Dakota Petroleum Council’s Study of 152 Bakken crude samples found an average RVP of 11.7 psi and a max of 14.4 psi. A rule will go into effect in North Dakota this month setting the limit at 13.7 psi.”

Assemblymember Bill Dodd was not in attendance at the press conference but sent a statement, “The safety or our residents is of paramount importance. The federal government needs to ensure that the public safety and environment in our communities here and across the nation are protected. Congressman Garamendi deserves recognition for raising the issues surrounding crude oil rail shipments and working towards solutions.”

Likewise, Senator Lois Wolk sent a statement to the media.

“It is key that we tackle this issue at all levels in order to ensure the safety not only within my district, but across the state,” said Senator Lois Wolk. ” In order to improve the safety of transporting hazardous materials by rail, I support Governor Brown’s budget proposal for a fee, that I previously introduced, and is written into this year’s budget for local emergency preparedness. In addition, I have introduced Senate Bill 730 which would require that all freight trains operating in the state be manned by at least two people. This requirement ensures better communication and safety as well as operational efficiency.” 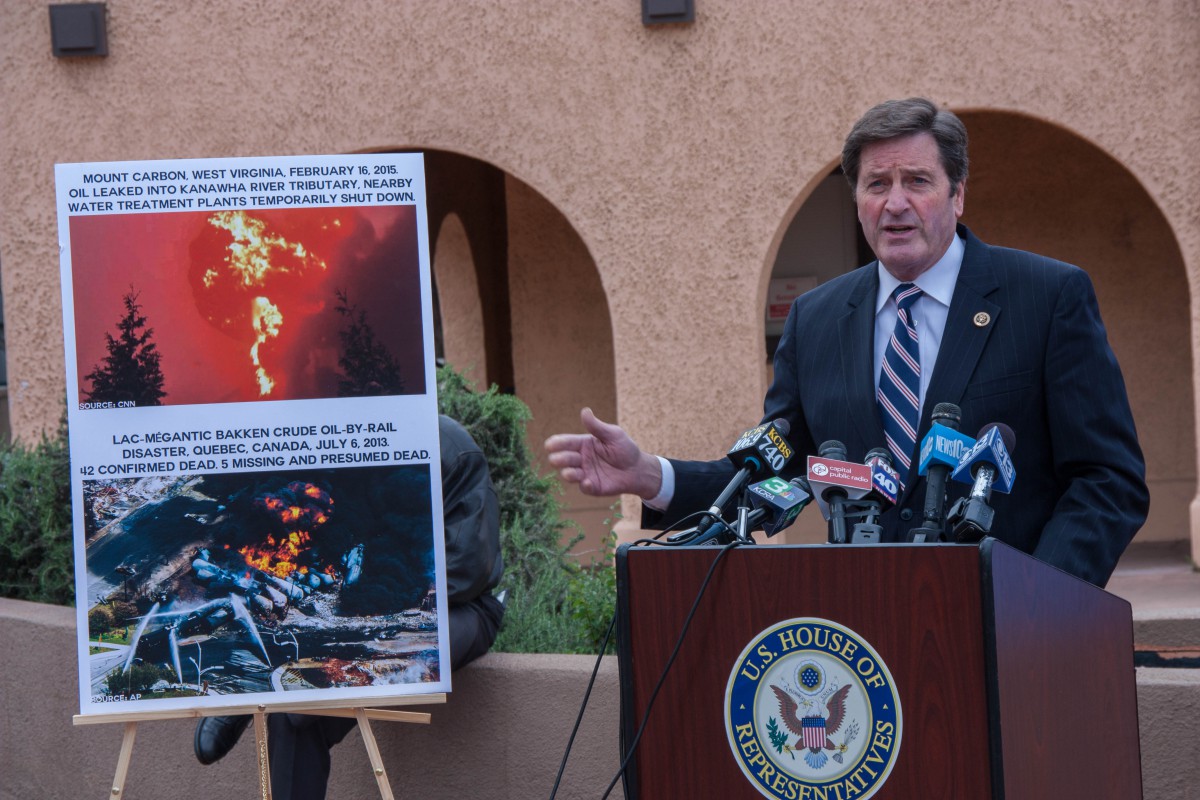