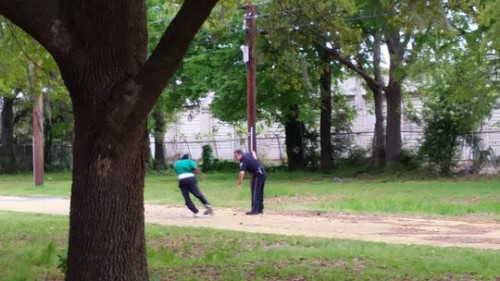 Officer Michael Slager told investigators that Walter Scott had taken his Taser in a struggle and that he feared for his life. By most reports, both the local media and local police had bought into it. But for the emergence of the video that directly contradicted Officer Slager, he may well have gotten away with this.

The fact that a police officer is being charged with murder for a shooting that occurred on duty, under the color of law, is extremely rare. Countless other such killings, even those captured on video, have had no such result. It is all the more remarkable that this occurred in South Carolina and involved a white officer killing a black man.

As Los Angeles civil rights attorney Connie Rice said in an interview with the LA Times earlier this week, “It’s unusual. Because normally every effort is made not to indict an officer,  and in this case they looked at the evidence and they charged right away.”

The national narrative on officer involved shootings of unarmed black men has definitely changed some of the calculations. Ms. Rice noted, “I think it was the video that made it pretty clear what was going on and what happened. And the backdrop of what feels like an avalanche of these shootings, but what is really the norm in this country of questionable shootings of unarmed black men. To me, it’s always been there as this background avalanche that nobody pays attention to. But because the spotlight is on it now, people are beginning to become aware.”

That is what should worry us – this video in a lot of ways happened by accident. A person just happened to be there and videoed the incident on their camera phone. In fact, in an interview, the man who filmed the shooting said he almost deleted the recording over fear for his life.

“One of the officers told me to stop, but it was because I (said) to them that what they did it was an abuse and I witnessed everything,” he told CNN’s Anderson Cooper.

It has been nearly 25 years since a video camera by happenstance was able to capture the beating of motorist Rodney King by LAPD officers. Videos have had an uneven impact on cases. Often the video captures only a portion of the case – and, as even some of the more infamous cases have shown from Rodney King to Oscar Grant to Kelly Thomas – videos do not mean convictions for police.

Nevertheless, Ms. Rice believes that they are having an impact. “The videos are turning the police culture upside down,” she said. “Because the community knows what goes on. The police are in deep denial and they have an automated cover-up system for themselves. They just automatically tell a story that exonerates themselves.”

She explained that police are trained to say, “I was in fear of my life.” She said, “It’s almost like a mantra. And that’s just the norm and they see it as protecting themselves from an unreasonable public and unreasonable politicians. Because from the cops’ point of view, they’re asked to do the impossible and when they do it then they’re indicted.”

She described a conversation where she asked one officer, “Why do you lie so much?” and he said, “Ms. Rice we don’t consider it lying. We consider it protecting ourselves. What you call a lie we call survival.”

She said, “It’s that mentality. And the public, of course, sees cops covering up for bad deeds. Now I can understand both vantage points.… The problem is it’s not sustainable. And that’s what you’re seeing now; you’re seeing a strategy of survival falling apart.”

The question everyone is asking now is whether police use excessive force too often and whether the public is starting to see this for the first time.

Ms. Rice says, “No. I think what the country is doing is waking up to the possibility that the police could be wrong every now and then. I don’t see any tipping point of any kind. I see the same great reluctance on the part of the public to believe the African American community, because if you believe the African American community you really, really, really have to change your policing culture. And I don’t think the American public is there yet.”

However, what the public needs to thing about is this: but for the video, would Mr. Slager be facing murder charges? The fact that there is a video is extremely unlikely – there just happened to be a guy in the park, he just happened to persist when police basically ordered him to stop recording and leave, he was reluctant to come forward and nearly erased the video.

How many times has this happened, where the officer claims fear of life and it is not caught on video so the officer is believed? Despite the slew of recent high-profile cases, police officers almost always get the benefit of the doubt – and perhaps rightly so, given the power we entrust in them.

The New York Times this week put it this way, “The case underscores two problems that have become increasingly clear since the civic discord that erupted last year after the police killed black citizens in New York, Cleveland and Ferguson, Mo.”

“The first, most pressing problem is that poorly trained and poorly supervised officers often use deadly force unnecessarily, particularly against minority citizens. The second is that the police get away with unjustly maiming or killing people by lying about the circumstances that prompted them to use force,” they write.

The Times adds, “Police departments all over the country clearly need to do a better job of training on how to de-escalate encounters with citizens and explaining when and how deadly force can be used.”

This was the problem we had with the Ferguson account – Officer Wilson seemed to have opportunities to de-escalate the confrontation and there are even questions about whether he needed to fire the kill shot. But that case was not caught on video – one wonders what we would have seen differently if it had been.

As University of South Carolina School of Law Professor Seth Stoughton put it this week in the NY York Times, “When cops evaluate a use-of-force incident, they ask whether it was justified, focusing on the legal rule set by the Supreme Court in the 1989 case Graham v. Connor. The Court held that officers may use force so long as it is ‘objectively reasonable.’ To determine whether a particular action was objectively reasonable, the Court held, judges must view the situation through the deferential lens of ‘a reasonable officer on the scene.'”

He continued, “When civilians evaluate a use-of-force incident, they ask whether it was avoidable. They want to know whether the officer could have done something—anything—else.”

NY Times columnist Charles Blow notes that while the police rightly charge the officer with murder and fire him from the department, the Mayor of North Charleston Keith Summey, says of the incident: “When you’re wrong, you’re wrong. And if you make a bad decision, don’t care if you’re behind the shield or just a citizen on the street, you have to live by that decision.”

He calls it “yet another in a horrifyingly familiar succession of cases that have elevated the issue of use of force, particularly deadly force, by officers against people of color and inflamed the conversation that surrounds it.”

We have talked extensively about the trust issue. Mr. Blow argues that this case “further erodes an already tenuous trust by people of color in the police as an institution.”

He notes, “CBS News polling has shown that a vast majority of blacks believe that the police are more likely to use deadly force against a black person than a white person (zero percent believe the inverse.)”

Many have suggested we should decouple race from this discussion – but that is difficult to do. North Charleston, the third largest city in South Carolina, is comprised of 47 percent blacks and only 37 percent white. However, the police force is 80 percent white.

Police Chief Eddie Driggers was asked about whether he believed race played a role in what happened.

“I want to believe in my heart of hearts that it was a tragic set of events after a traffic stop,” he said. “I always look for the good in folks, and so I would hope that nobody would ever do something like that.”

However, “Arrest rates reflect police decisions on enforcement as well as underlying crime rates and do not mean that blacks are disproportionately likely to commit crimes and put themselves in harm’s way.” They note, “African-Americans are far more likely than white Americans to be arrested for marijuana possession — 3.7 times more likely in 2010, according to the American Civil Liberties Union — even though the groups use it at similar rates.”

That finding is fascinating and worth further inquiry.

However, the fact that 297 people last year who were unarmed were killed by police also bears further inquiry.

As many have noted, we don’t have a good statistic, however, on overall killings. Eugene Robinson in the Washington Post wrote on December 1, 2014, “According to the FBI’s Uniform Crime Report, in 2013 there were 461 ‘justifiable homicides’ by police.” However, “The true number of fatal police shootings is surely much higher, however, because many law enforcement agencies do not report to the FBI database. Attempts by journalists to compile more complete data by collating local news reports have resulted in estimates as high as 1,000 police killings a year. There is no way to know how many victims, like Brown, were unarmed.”

So 297 is just the number they counted.

Kami Chavis Simmons, a former federal prosecutor, is a professor and director of the criminal justice program at Wake Forest University School of Law, and writes this week, “It is impossible to determine the scope of the problem without a comprehensive national database of the number of people killed by police officers. Although some groups do track when police use serious force, a federal database would help policy makers identify not only dangerous trends and determine whether police use force disproportionately against minorities, but best practices, and thus ultimately develop policies that prevent more deaths.”

The bottom line is we need more data here. I think it is impossible to strip race from this discussion and, since race may be a factor, not particularly helpful. However, I do agree looking at the issue more broadly may gain traction.

We should focus on techniques that police officers can take to de-escalate situations and tactics to deal with individuals who are not cooperating but do not in general represent a true threat to the officer and the public.

In this case, Mr. Slager pulled Mr. Scott over on a routine traffic stop. If Mr. Scott wanted to run away, perhaps theofficer simply should have let him, gotten his information and confronted him later? Was Mr. Scott really a threat to anyone at this point?

31 thoughts on “My View: What the Lonesome Death of Walter Scott Tells Us”