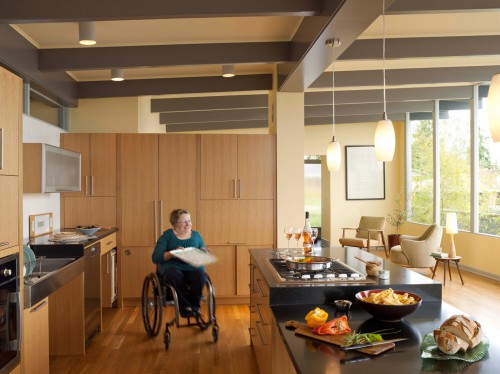 Council on Tuesday night will introduce a Universal Access Ordinance that, if adopted, will make all all single-family units subject to the Universal Access requirements, regardless of whether they require council approval.

According to staff, “The intent of the recommended ordinance, consistent with the requirements that have been applied to projects under existing policy, is to incorporate features that are feasibly and easily included during initial construction of housing.”

Back in 2010, the city held a series of workshops to discuss the issue of accessibility in single-family housing, where a list of accessible features were identified and agreed to as a list of reasonable features that could be provided in the development of new housing.

Staff noted, at that time, in those discussions there was consensus that a tiered approach with some required features might be a more valuable and flexible structure for future development. Staff took the notes from the discussion and collected other information and feedback, including public and developer written communications, in drafting an early version of tiered requirements.

The ordinance now includes nine requirements. (1) Exterior Zero-Step Wider Exterior Walkway to Low Threshold Entry (at least 36” wide, without steps); (2) Low threshold entry at a minimum of one exterior door that is 34” wide or 32” clear opening; (3) Interior path of travel throughout the ground floor; (4) Accessible ground floor half bathroom; (5) Accessible ground floor common room; (6) Electrical outlets for future stair lift or placement of stacked closets to accommodate a future home elevator; (7) accessible electrical panel on the ground floor interior or exterior of the unit; (8) rocket light switches throughout and (9) Single Action Hardware at Accessible Entrance and on Ground Floor.

However, two items that seem to be core principles of universal design are not included.

First an accessible ground floor bathroom. Staff explains, “Adding a shower/bath where one was not originally planned could add $3,000. Other costs associated with the inclusion of a full bathroom on the main floor are a matter of limited square footage and space that would be distributed differently than if the unit only included a half bath/ powder room. A full bath, like a bedroom, is less feasible in higher density units with a small unit footprint/ground floor.”

Second, accessible ground floor bedroom: “In homes that are greater than two thousand square feet, there is often a bedroom on the first floor, so this would not result in any additional cost to those units. However, as the housing unit and parcel decrease, the ability to have a bedroom on the main floor becomes more difficult due to the limited square footage of space. With an accessible common use room that can be adapted or can accommodate a bed short-term, a separate bedroom is not being recommended as a required feature.”

Staff adds, “Based on comments collected from the development community and research by staff, it appears that an exterior path of travel consistent with strict ADA slope requirements, a full bathroom and bedroom downstairs are often infeasible in housing units with a small ground floor, particular units of higher density. Assessing these challenges helped create the list of required features.”

Staff wrote that this formalizes universal design requirements in new housing that would not have to come before council for approval. One of the questions unanswered is how much housing this will really impact in a time when the city has approved the last major housing project in Cannery.

Cannery, which had been subject to criticism by some senior advocates, in the end came up with a compromise that appears to have assuaged some concerns.

Of the single-family homes, 25 percent of them will be single-story houses. Moreover, the developer agreed to universal design in all its homes through its Livable Design Program, including stepless entries, multiple-height work surfaces, wider hallways/stairways, with other features available to add.

Moreover, contrary to the city’s own ordinance, The Cannery will have a bedroom on the first floor in 75 percent of the homes, a feature that Senior Commission Chair Elaine Roberts Musser called “a crucial universal design feature.”

The developer also reportedly promised that all staircases will be reinforced to allow for installation of a chair lift.

Ms. Elaine Roberts Musser in November 2013 wrote that the Davis Senior Citizens Commission unanimously approved the following motion: “The project proposal is generally consistent with the guidelines for housing that serves seniors and persons with disabilities. The proposed livable design program and builder commitment is more than sufficient in meeting the goals of the city’s guidelines for universal access.

“The project’s location, configuration and amenities appropriately meet the city objectives of providing an inclusive multigenerational approach to residential development.”

The question, though, is how many houses would this ordinance impact?