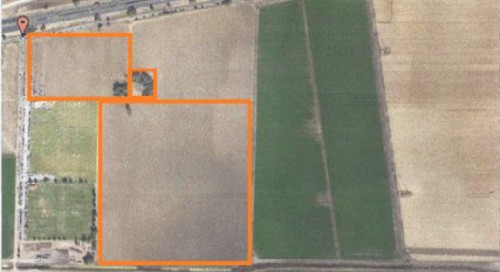 The city of Davis is proposing a 40-acre expansion of the Davis Legacy Soccer Complex in the unincorporated area east of Davis. The city has leased the land from the landowner and re-leased it to the soccer club.

Taro Echiburu, Director of Planning, Public Works and Environmental Services for Yolo County, writes to the city of Davis, “If this were a County project, the County would address the points described below before approving the Project. We recommend that the City consider these points and recirculate the environmental documents. However, if the City decides to proceed with the Project, the County is prepared to offer its assistance during the implementation stage to ensure that the Project is a success.”

The project converts about 40 acres of farmland into nine full-size soccer fields along with 1100 parking spaces. Mr. Echiburu notes that, while the project is described as “temporary use,” due to the 20 to 30 year duration of the lease, “the County expects that the project will last beyond this time frame, similar to the fields constructed 20 years ago that were also described as ‘temporary’ at the time.”

He argues, “The soccer complex does not comport to local general plans or zoning.”

In the proposed CEQA it states that “there is an area designated ‘Parks and Recreation’ in the general area of the project” and that the original fields were “permitted uses with the Yolo County General Plan and Zoning.”

However, Mr. Echiburu argues, “What the certification omits, however, is that the expansion itself is not in a Parks and Recreation Zone, and it is therefore inconsistent with the County General Plan and zoning of the area — both under the old County Code and the new.” The city’s general plan land use map designates the area “agricultural” which “does not allow for recreational uses.”

The staff report states that “[u]nder Yolo County zoning the recreational fields are considered a permitted use.” Mr. Echiburu argues, “This is incorrect because sports fields are not an allowed use in the Agricultural Intensive zone.”

He says that the county staff raised this issue several months ago but that the city declined the county’s recommendation and “is proceeding as a non-conforming use.”

Further, he speculates that “amending the City’s agricultural designation might require voter approval.” However, Measure R specifically exempts “land to be used for public parks,” under voter requirements.

Moreover, he argues that the city should not approve this project without doing a traffic study. He argues that the plan “does not contain a significant analysis of the impacts related to air quality, transportation, and greenhouse gas reduction/climate change. Of significant importance to the County, whose roads will be affected by the Project, the MND (Mitigated Negative Declaration) does not analyze the effect of the expanded facility and the increase of cars that are expected to fill the 1,100 new parking spaces on the site.”

Given the potential for hundreds of teams, there will be a significant increase in the use of the site and therefore significant impacts that need to be mitigated.

The MND’s air quality analysis concludes that “the extent of such an increase [in use] would not lead to district thresholds and applicable air quality plans being exceeded.” The MND continues, saying that “any increase in the overall emissions levels in the immediate area (either through vehicle trips originating within the City of Davis or from another starting location) cannot be reasonably quantified logically attributed to increased use of the site,” and therefore, “it would not be reasonable or feasible to attribute possible overall emission increases to the increased usage of the site.”

Mr. Echiburu writes, “We were unable to identify the evidence or factual air quality or traffic impact study that supported these conclusions. We recommend that the findings be substantiated, including with calculations of air emissions generated by increased traffic from the Project.”

Mr. Echiburu writes, “The City should clarify its jurisdictional authority over the land – rather than the soccer club leasing the land directly from the donor-landowner, the City has leased the land first in order to exercise control over the entitlements.”

“This is an unusual arrangement and it effectively allows a private enterprise to avoid County land use regulation,” he writes. “The County therefore asks that the City expressly, by resolution, assume land use, building code, health, and public safety responsibility over the property after the City has re-leased the land to the soccer club. Although any building, health, or event permits would then be directed to the City, we ask that the City promptly notify the County of any permit applications to ensure County involvement, where necessary.”