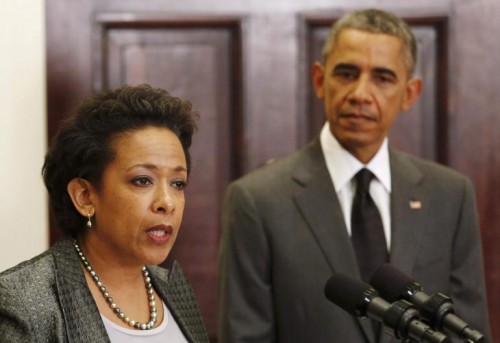 The political story was a standoff over the nomination of Loretta Lynch to fill longtime Attorney General Eric Holder’s spot at the head of the Justice Department. The nomination comes at a crucial time when the nation is struggling on issues like police misconduct, having conducted numerous investigations into police departments and officer involved shootings and killings, since the August 2014 killing of Michael Brown in Ferguson, Missouri.

Beyond that is the need for federal sentencing reform and a shift of the war on drugs.

So, moving past the partisan battle over Ms. Lynch’s nomination, we have the question as to what we are getting and whether she is what this country needs at this time. For all of the shortcomings that Eric Holder had, he appeared to move the conversation forward on a number of fronts.

As the NY Times put it this week, Mr. Holder “has been the administration’s most outspoken voice on issues of race relations and civil rights. His tenure made him a hero among many on the left but recently earned him scorn from some police groups who said he was too quick to criticize officers amid a spate of high-profile episodes of black men dying at the hands of white officers.”

According to the Times, Ms. Lynch, who is the daughter “of a North Carolina civil rights leader and a child of the segregated South, shares many of Mr. Holder’s liberal views but has signaled that she plans a different approach, particularly in the nationwide debate over police tactics.” They continue, “While Mr. Holder recently completed a tour of minority communities to discuss policing, Ms. Lynch’s aides said that improving police morale and finding common ground between law enforcement and minority communities would be among her top priorities.”

Personally, I have no problem with working to establish better relations with the police – doing so is the best path towards reform, something that we have discovered locally as well.

The Times reports that she has “spoken about the need for police officers, because they have positions of power, to repair fractured relationships with minorities. But she has also described, in passionate and personal terms, how law enforcement is a force for good in minority neighborhoods.”

The political battle focused mainly on President Obama’s executive actions to give legal status to immigrants, rather than disagreement on civil rights issues.

Where I start to worry is on her views on some other issues. For instance, under the Clinton and Bush administrations, the Justice Department at times forcefully and violently attempted to enforce federal laws on marijuana to the point where they conducted violent raids in California on clinics with chronically and terminally ill patients.

Under the Obama administration, the Justice Department has backed off. They have not attempted to enforce marijuana laws in states that have legalized the drug. Mr. Holder recently “questioned whether the government should keep marijuana on the list of the most serious drugs, in the same category as heroin.”

Ms. Lynch does not share this view. She told the Senate “that she did not support legalization and did not agree with Mr. Obama that marijuana may not be more dangerous than alcohol.”

However, others pointed out that her testimony came in front of Senator Chuck Grassley, a staunch opponent of marijuana legalization in the states and that she was supportive of the current policy to allow the states to set their own policies on marijuana.

Then we have the growing issue of civil asset forfeiture. Earlier this year, Mr. Holder barred local and state police from using federal law to seize cash, cars and other property without warrants or criminal charges. The Washington Post called this “the most sweeping check on police power to confiscate personal property since the seizures began three decades ago as part of the war on drugs.”

“With this new policy, effective immediately, the Justice Department is taking an important step to prohibit federal agency adoptions of state and local seizures, except for public safety reasons,” Mr. Holder said in a statement.

According to the post, “This would eliminate virtually all cash and vehicle seizures made by local and state police from the program.”

Critics note that Mr. Holder’s order only curtails those seizures requested through the federal program and still allows state and local police to seize and keep assets, particularly when the property is “linked” to public safety concerns — such as illegal firearms, ammunition, and explosives.

In late November, Forbes reported that Loretta Lynch has no problem with civil asset forfeiture. “In an editorial published November 22, “Loretta Lynch’s Money Pot,” the Wall Street Journal revealed that during her tenure as U.S. Attorney for the Eastern District of New York, Ms. Lynch has used civil asset forfeiture in more than 120 cases, raking in some $113 million for federal and local coffers.”

As Forbes notes, “The trouble with civil asset forfeiture cases is that they frequently inflict severe losses on people who have only the most tenuous connection with a crime – or even no connection at all.”

The Washington Times reports that, at the Senate hearing, she called civil asset forfeiture a “wonderful tool” for law enforcement.

On the critical issue of sentencing reform, the NY Times reports, “She is expected to continue Mr. Holder’s push on Capitol Hill to ease sentencing for nonviolent drug offenders. A pending bill on that subject has support in both parties, and Ms. Lynch backs it, aides say.” However, “it is not a personal passion for her as it was for Mr. Holder, they say, and it is not clear that she will make the bill an early priority.”

If you are looking for transparency, you have come to the wrong place, perhaps. NBC News reported, “The office headed by the woman poised to become the next attorney general has used an unusual method to keep many of its prosecutions hidden from the public, an NBC News investigation has found.”

“Critics are concerned the practice may infringe the Constitution’s guarantee of a public trial,” NBC News reports.

“While pseudonyms may be appropriate in exceptional cases, the courts should always opt for more transparent methods of protecting sensitive information when available,” said Lee Rowland, staff attorney of the ACLU Speech, Privacy & Technology Project. “The disproportionate number of John Doe cases in the Eastern District is certainly a cause for concern; complete secrecy about the parties in a case should never be a default option.”

Speaking of the ACLU – where do they stand on Ms. Lynch’s nomination? We have no idea. We couldn’t find a single opinion by the civil rights group. BuzzFeed back in early November ran a story that the “ACLU (is) not commenting on Obama’s Attorney General pick.” They told Buzzfeed, “[W]e’re not going to issue a statement or do interviews about her.”

As far as we can tell, they haven’t.

Our assessment, therefore, is that while Ms. Lynch is probably not problematic from the perspective of these issues, she’s not going to lead the way to reforms or be outspoken like Eric Holder was. Given the political state of the world, this is the area in which the Obama administration can make the biggest difference in the last 18 months of his presidency, and he seems likely to fall short.