On May 8, Armando Gonzalez, 41 years old of Woodland, was sentenced to 18 years to life for his role in a fatal accident after a Yolo County jury found Mr. Gonzalez guilty on April 10, 2015, of second degree murder and gross vehicular manslaughter for the fatal accident that led to the death of an 85-year-old lady. The jury also convicted Mr. Gonzalez of two counts of perjury for lying to the Department of Motor Vehicles.

On February 4, 2014, according to the District Attorney, Mr. Gonzalez left work after having two seizures earlier that morning. Just after 2:00 p.m., Mr. Gonzalez, while having a seizure and speeding 80 miles per hour in a 35 mile per hour zone, drove directly into the vehicle driven by Darlene Morales.

The family of Mr. Gonzalez disputes the DA’s interpretation of the case and argues that Mr. Gonzalez’s private attorney failed to bring forward key facts and raise key legal points in his defense.

Mr. Gonzalez’s wife, Isabel Levario, showed the Vanguard documents submitted to the DMV that show that both the DMV and his doctor knew of his condition and he had medical approval to drive.

Ms. Levario called it “a tragic accident.” But she pointed out, “The DMV kept reinstating his license and his epilepsy had been controlled for more than a year prior to the accident.”

The DA’s case that Mr. Gonzalez knew he was a danger and a risk for driving is mitigated by the fact that the DMV and the doctor cleared him to drive. The perjury convictions stemmed from the belief that Mr. Gonzalez falsified DMV forms, either by withholding or minimizing information about his epilepsy.

Based on what we see, there is no evidence that Mr. Gonzalez did that.

A form signed by Armando Gonzalez on August 11, 2010, showed that he acknowledged suffering “seizure, convulsions, or epilepsy,” acknowledged a major illness or operation in the last five years, and acknowledged taking medications – and he listed his medications and two operations.

He authorized the Institute of Restorative Health to release his medical information. 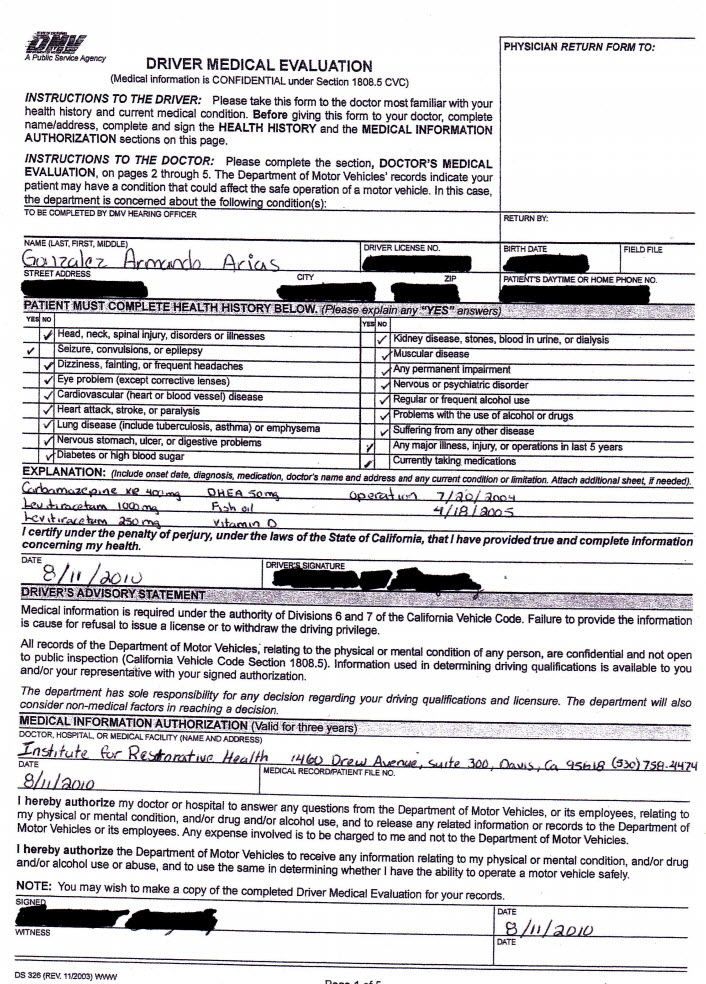 His doctor filled out the medical evaluation, which indicated that Mr. Gonzalez suffered from epilepsy. It stated Mr. Gonzalez had been his patient for six years, that he had been on controlled medication and the condition had been under control for three months.

It stated Mr. Gonzalez was adhering to his medical regimen. The form asks, “In your opinion, does your patient’s medical condition affect safe driving?” “No,” was the doctor’s answer, as long as he continues taking his medicine. The doctor, when asked if he advised against driving, responded, “Up to now, yes. Not now.” He added, “I feel that he is a low driving risk.” 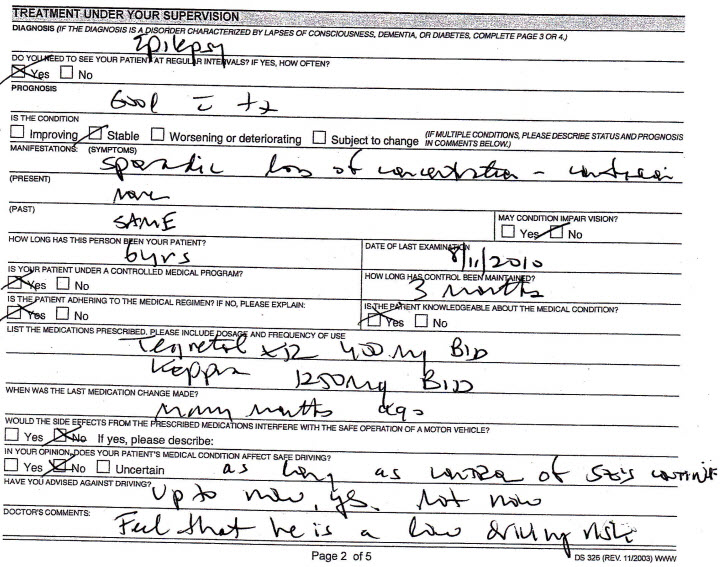 That form was signed by Dr. Eric Hassid. Ms. Levario complained that the DA in the case “undermined the expertise of my husband’s neurologist. Dr. Eric Hassid testified and later in their closing statement the DA said he knew nothing, even though he has 28 years of experience.”

Certainly, if Dr. Hassid had been Mr. Gonzalez’s doctor for six years and was well aware of his condition, should he bear some responsibility for stating that he felt that the condition would not affect safe driving and that Mr. Gonzalez was a low driving risk? 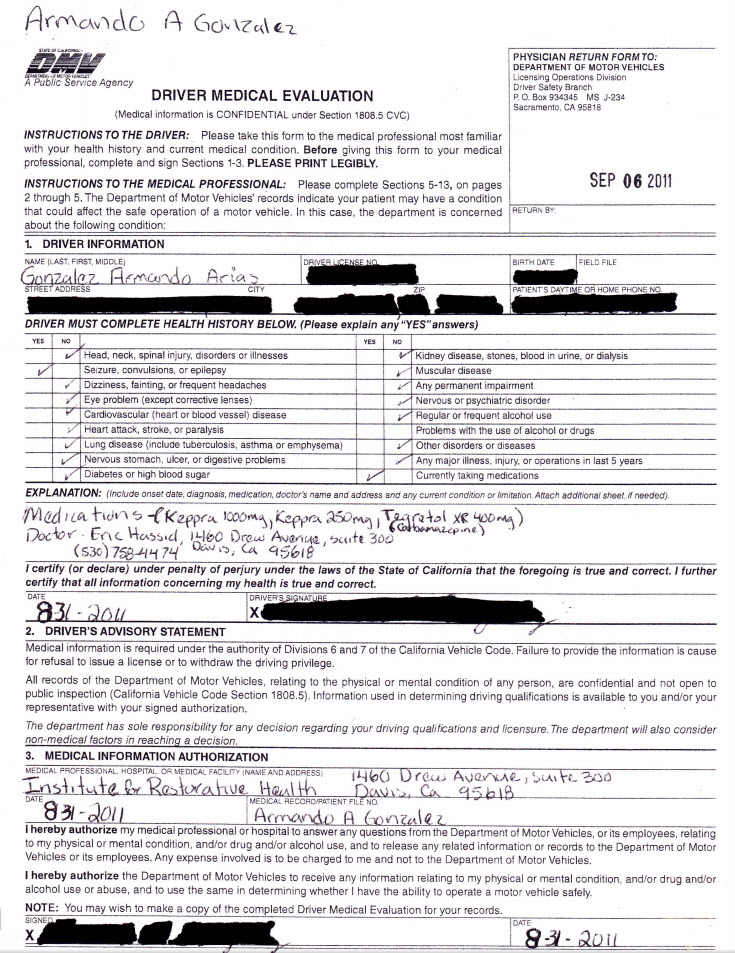 Once again, Dr. Hassid, in August 2011, stated that his patient’s condition had been under control for the last seven to eight months. He said his medication had been the same for one to two years, and that he does not see the medication condition as currently affecting safe driving. 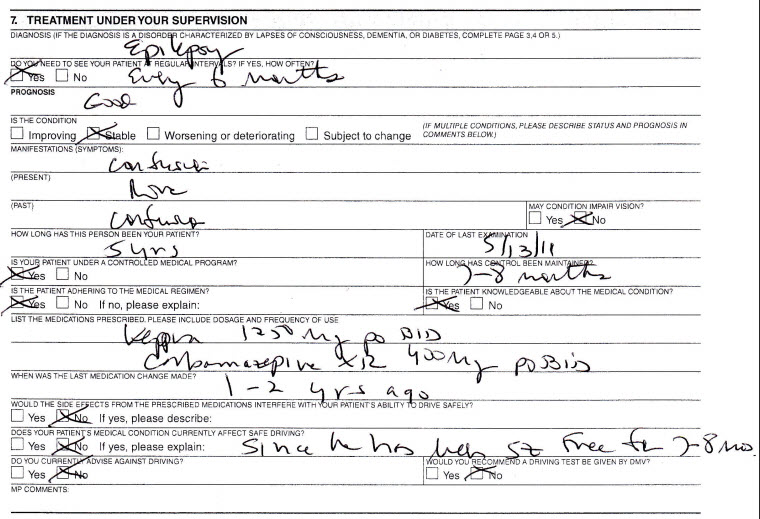 Ms. Levario told the Vanguard that her husband had been symptom-free for over a year. Despite having clearance to drive, she said that “it wasn’t my husband’s regular practice to drive on a daily basis. He drove that day because I was feeling extra tired since I had only 12 days left till my due date.”

On the day in question, she said that her husband called her to let her know that he was allowed to go home early because of the lack of cars to work on. She said that he sounded fine when he called.

Her husband’s boss testified that Mr. Gonzalez had had a seizure and blacked out. But Ms. Levario said, if her husband had blacked out, why did the employers not call her? She was listed as the emergency contact.

She said, “This is a condition that causes unconsciousness and if not made aware he would not have known he just had a seizure.”

In her view, the DA created a wonderful story, “but that is all it is…a story. We are telling the truth! They judged him on the facts of a medical condition they knew little about. It took two hours for the jury to deliberate and come to a guilty verdict without truly understanding his medical condition. This is a medical condition that takes years to understand through testing and research. Medical doctors still have questions.”

The Vanguard covered the case during trial. The court watch interns agreed that there were several key points that the defense attorney failed to raise. Moreover, the defense lacked the resources to bring in medical experts other than Dr. Hassid.

As the Vanguard wrote earlier, the case for gross negligence in this situation seems relatively reasonable. As the court notes, “Gross negligence involves more than ordinary carelessness, inattention, or mistake in judgment.”

The person acts “in a reckless way that creates a high risk of death or great bodily injury” and “a reasonable person would have known that acting in that way would create such a risk.” The instructions to the jury continued, “In other words, a person acts with gross negligence when the way he or she acts is so different from how an ordinarily careful person would act in the same situation that his or her act amounts to disregard for human life or indifference to the consequences of that act.”

Second degree murder is defined “as an intentional killing that was not premeditated.”

Under California law the prosecutor has to show the conduct reflects an “abandoned and malignant heart.” “Implied malice may arise if the defendant meant to create the circumstances that resulted in the killing of another person. When a criminal case lacks malice, the prosecutor will likely need to pursue manslaughter charges instead of murder charges.”

“He had no implied malice he was just trying to come home to his pregnant wife,” Ms. Levario told the Vanguard. “His epilepsy had been controlled for about a year and a half. He did all he could: eat healthy, exercise, sleep well, every six months visited with his neurologist, consistently take his medication.”

In our view, a life sentence and a second degree murder charge seem inappropriate, given that both the DMV and Mr. Gonzalez’s personal doctor – whom he saw every six months – had cleared him to drive.

DDA Amber Zambor argued, “(It) was not a question of if the defendant was going to kill someone, it was a matter of when he killed somebody.” The question I think that needs to be answered is how both the DMV and Dr. Eric Hassid allowed such a person to drive their vehicle in the first place.