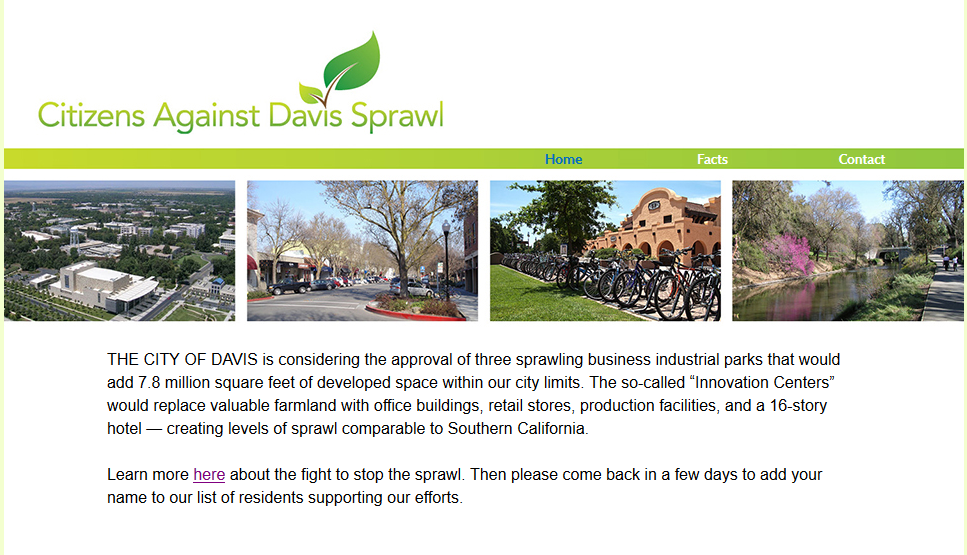 While for the most part it has been fairly quiet, there are signs that the forces that may align against a potential innovation park are gathering. In recent weeks, we have seen several op-eds and letters that have pointed away from peripheral innovation parks.

Now a group calling themselves Citizens Against Davis Sprawl has launched a website. On their page they write: “THE CITY OF DAVIS is considering the approval of three sprawling business industrial parks that would add 7.8 million square feet of developed space within our city limits. The so-called ‘Innovation Centers’ would replace valuable farmland with office buildings, retail stores, production facilities, and a 16-story hotel — creating levels of sprawl comparable to Southern California.”

The arguments they have put forward as follows:

A WOLF IN SHEEP’S CLOTHING: Say NO to the so-called “InNOvation” Centers

THE CITY OF DAVIS is considering the approval of three sprawling business industrial parks that would add 7.8 million square feet of developed space within our city limits. While one of the projects is on hold for the moment and could still move ahead, the other two (4 million square feet) are moving full speed ahead. The so-called “Innovation Centers” would replace valuable farmland with office buildings, retail stores, production facilities, and a 16-story hotel — creating levels of sprawl comparable to Southern California.

“INNOVATION” IN NAME ONLY

The only information we have about the initiators of the website is the contact name is Randy Clark. The website itself is registered through “Domains by Proxy” which allows for anonymous hosting of websites.

This is only the latest pushback on the Innovation Parks. It was only two weeks ago that the Davis Innovation Center put their project on hold, leaving just the Mace Ranch Innovation Center as a larger peripheral innovation park on the radar for Davis.

Earlier this week, we noted an op-ed by by James Zanetto and Judy Corbett, which argued we should “[b]oost our economy, but do it the Davis way.” They argue that recent efforts have focused on larger innovation center business park developments, and they suggested, after the hold put on the Davis Innovation Center, instead exploring the PG&E Corporation Yard.

They argued, “If, over time, the roughly 25-acre PG&E corporation yard were to be added to this, we’d have a truly significant site for office and lab uses within bicycling distance of the university, downtown and Amtrak.”

They see that a “long-term, urban design solution is needed to address our city’s fiscal issue.” They argue, “Working with community residents, we need to develop a vision of a compact, vibrant community that recognizes the talent in its world-class university, that preserves prime agricultural land and that continues its tradition of bicycle- and pedestrian-based land-use planning through sustainable development practices.”

Their focus is on the downtown. “A vibrant, compact, mixed-use downtown is an important economic asset,” they write. “The new economy requires space where people from different silos (and of different ages) bump into one another regularly, stimulating new thinking and allowing innovative ideas to blossom.”

They conclude, “If we in Davis make the right choices, we can preserve our city’s quality of life and develop a sustainable revenue stream that will support our city staff while maintaining our parks, streets, bike paths, recreational facilities and the like. In order to achieve this, we need to ‘take our feet off the accelerator’ and develop a shared vision that will foster economic development.”

51 thoughts on “Anti-Development Efforts Pick Up”