The following is the City Manager Dirk Brazil’s transmittal letter on the new budget which lays out both his reorganization of city hall as well as his view on the upcoming budget year.

Presented for your consideration is the proposed Annual Budget for Fiscal Year 2015/16, a period that covers July 1 through June 30. The Budget is the primary policy document adopted by the Council that establishes the service levels and capital projects to be provided to the community by its city government. It establishes the financial and human resources devoted to accomplishing community goals and objectives as reflected by the City Council. It provides a logical structure to organize its various programs, projects and other expenses. It provides a system for control of its revenues and expenses. Finally, the Annual Budget is a document widely available to the public and others interested in the operations of the city government.

The 2015/16 Proposed Budget is what I am calling a transitional budget, bridging a period of drastic cuts and program changes to a period of relative stability and, ideally, long term fiscal prosperity. While the many changes since 2008 have resulted in a stronger, more fiscally responsible organization, we must be continuously mindful of our long-term infrastructure needs, citizen expectations for high service levels to maintain a certain quality of life and the need to ensure the City is responsibly addressing our long-term fiscal obligations. This budget proposes no major cuts nor funding requests for large, new initiatives, providing instead minor funding to address Council Goals and Objectives (See Attached) while maintaining a healthy 15% General Fund Reserve.

Total All Funds Revenue for FY 2015/16 is budgeted at $301,524,747 with General Fund revenues totaling $52,109,371. This total includes a full year of sales tax generated as a result of the 2014 voter approved additional ½ cent sales tax increase. Sales Tax revenue for FY 2015/16 is budgeted at $13,802,537, an increase of $714,353 over the FY 2014/15 Adopted Budget. One time revenues include approximately $6.6 million in State Transportation Improvement Program (STIP) funds. The transportation funds will be used in projects on Mace Blvd., L Street and 3rd Street and will be augmented with monies set aside by the City for transportation infrastructure rehabilitation. The Safe Routes to School program is also receiving $222,000 in grant funding for FY 2015/16.

With a positive balance of revenues to expenditures, the current proposed budget is showing growth in fund balance for the first time in years. After several measures to cut costs, reduce citywide positions and enhance revenue this is a welcome scenario. While we want to celebrate the fact that we will not need to propose further cuts for the current fiscal year it is important to stress there are still challenges ahead as we continue to address the long term needs of the City.

The current expenditure assumptions include no MOU increases for open contracts as we are just now beginning the process of negotiations with employee bargaining units. Planned increases to the retiree medical and CalPERS pension costs are included in the budget, as well as any increases associated with contracted services and utility payments. 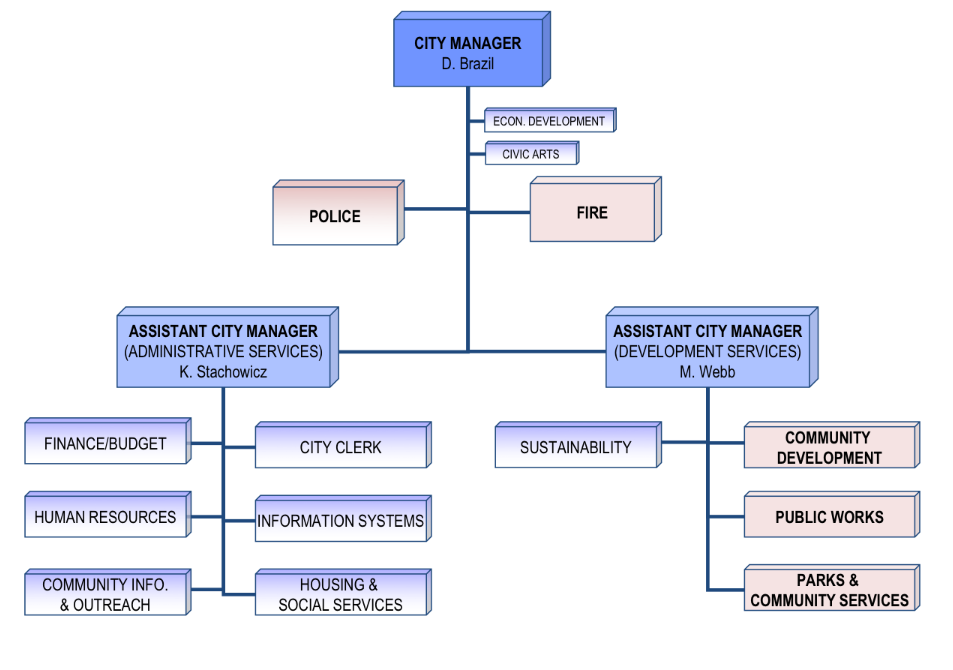 There are a series of reorganizational adjustments included in the FY 2015/16 budget. Offices within City Hall are being reorganized to provide greater access for the public. The City Manager’s office will now be centrally located providing easy access for the public and employees. Community Services offices will once again be located within City Hall and provide a localized, easy to find office. Utility payments, building permits, and other city services remain in City Hall. Included in this reorganization is the creation of two Assistant City Manager positions to replace an existing Assistant City Manager position and the Deputy City Manager and Community Development Director positions. One Assistant City Manager will oversee Community Development and Sustainability, Parks and Community Services, and Public Works while the second will have responsibility for the programs within the City Manager’s Office, Finance, Human Resources, and Information Systems.

In addition to the two Assistant City Manager Positions, a series of other reclassifications and human resource changes are included in the FY 2015/16 budget. The Parks and Community Services department has reinstituted a Parks and Community Services Director position as well as Office Assistant II to support the needs of the department and the public. Additionally an Office Assistant position at the Senior Center has been increased from 75% to 100%. The Public Works department is replacing the unfilled General Manager position with a City Engineer position, as well as making adjustments to the Water and Wastewater divisions to better manage workload as the City transitions to new requirements. The Water Division added one full time Water Quality Permitting Specialist and the Wastewater Division increased the salary range for the Lead Laboratory analyst based on new duties, reclassified a WWTP Electrician to a Senior Electrician, replaced a Water Division Water Quality Supervisor with a Water Quality Permitting Specialist and reclassified a Senior Office Assistant to an Administrative Aide. Wastewater also added temporary part time salaries on a onetime basis to assist with Phase II of the Collection Section Improvement project. Currently the City has one Administrative Analyst working for both Public Works and Community Development. FY 2015/16 will include a separate Analyst position for each department.

On the public safety front are enhanced recruiting options for the Police Department. We have worked diligently to recruit and hire the most qualified candidates to maintain a safe community. Competition with hiring and training practices of other jurisdictions makes it difficult for Davis to recruit and retain high caliber officer candidates. To assist in this effort the FY 2015/16 budget includes the addition of temporary part time Community Service Officer and Police Officer Trainee positions as well as a total of $16,000 for tuition reimbursement enhancements, $6,000 of which is offset by additional revenue from the Commission on Peace Officer Standards and Training (POST).

All of the changes will help staff to fulfill our mission to serve the public effectively and help mitigate some of the challenges generated over the past several years as we have had to reduce positions through retirements and attrition.

We have worked to address several unfunded liabilities over the past few years including Other Post Employment Benefit (OPEB), also known as retiree medical, and deficits in the Leave and Fleet replacement funds. Currently we are fully funding the OPEB costs based on the calculations of an outside actuary, one of the few jurisdictions in California currently at full annual funding. The Leave Fund and fleet replacement liabilities are currently being brought to full funding as part of a 7-year refunding plan. FY 2015/16 will be the second year of this effort. Information Services infrastructure is another area where we have identified future replacement needs not currently funded. Additional replacement costs have been added to the FY 2015/16 budget to begin to address the need to have replacement funds in place for all of our Information Services servers, switches, and other background equipment critical to maintaining our ability to provide services.

We also recognize there are additional areas that still need to be addressed. Maintenance of our transportation infrastructure, specifically pavement conditions throughout the City, needs to improve. In 2014, as an interim step, Council authorized an annual allocation of nearly $4,000,000 for road maintenance and rehabilitation. FY 2015/16 continues this allocation. And while this funding has been instrumental to keep our road work moving forward, it may not be sufficient to maintain an appropriate Pavement Condition Index (PCI). In addition, we have retained an outside consultant to assess our parks and facilities needs and specifically identify our unfunded replacement needs. Currently we are working to improve our parks irrigation system to help conserve water while maintaining our parks beauty and value. This is the second year of a five year effort, with a City set-aside of $500,000 per year.

In addition, we are updating our Master Fee Schedule and Development Impact Fees. With the Master Fee update we can be sure we fully understand the costs associated with delivering services to the public and providing Council with guidance when deciding the level at which fees are set. The Development Impact Fee update will ensure we fully understand the mitigation fees we need to collect from development within the City. Both of these studies will be completed in FY 2015/16.

The current General Fund reserve policy is set at 15% of General Fund revenues. The current budget estimate for FY 2014/15 and the Proposed FY 2015/16 budget show the City ending with a reserve of 15.55%. This policy is currently under review by staff to confirm that it identifies a proper value for the City’s reserve. This project will be completed in FY 2015/16

Based on the most current forecast, we are showing signs of recovery after years of challenges borne out of the most recent recession. Property tax receipts are showing healthy increases and the addition of the ½ cent sales tax revenues and ongoing expenditure reductions have turned previously negative fund balance projections into positive territory. We must act prudently and responsibly, however, as there are still needs and services yet to be fully addressed. I am, however, cautiously optimistic as we continue to move beyond the challenges of the past.