Tonight, the Davis City Council will be asked to adopt a series of resolutions that form the CFD (Community Facilities District), including a landowner vote (with a single landowner), levy special taxes and approve a Funding and Acquisition Agreement for the proposed improvements.

Staff notes, “The City Council is also being asked to take a separate action to introduce an ordinance amending the Cannery Development Agreement as it pertains to the SW bicycle/pedestrian connection, pursuant to the direction provided by Council on February 17th.”

Following the controversy surrounding the CFD, Councilmember Rochelle Swanson asked for a modification in the CFD that they would meet with The New Home Company with the hope of reducing the size and scope of the assessments.

As a result of those talks, “The New Home Company has proposed lowering the maximum special taxes. The maximum tax rates for each category of land use are reduced by 32% to 47%.” 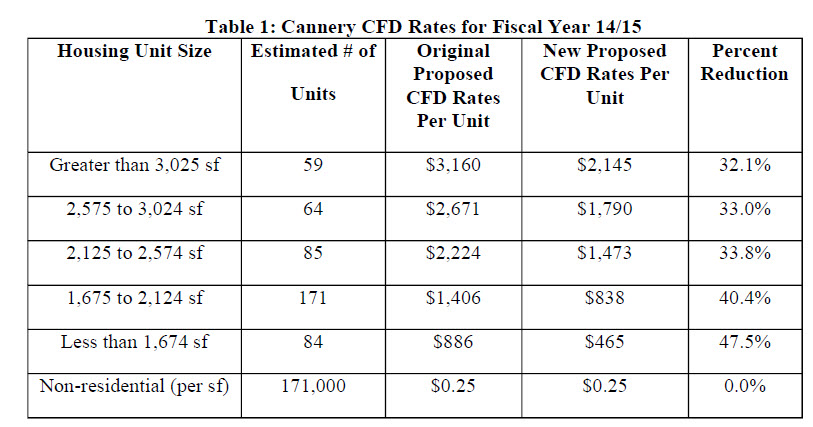 Staff notes that the biggest reductions on a percentage basis are on the smaller residential units, which represent the majority of the units in the project. The proposed rates on the two smaller housing sizes are nearly cut in half.

The Cannery CFD is cheaper on the lower end than the current rates for the Mace Ranch CFD, but more expensive on the higher one.

As staff notes, “Based on the analysis prepared for and presented to the Council at its February 17th meeting, the combined ad valorem, assessment and CFD tax burden for homes in The Cannery, including the DJUSD, CFD’s represent an overall effective tax rate of 1.63% of estimated market value for homes in The Cannery. Prior to the lowering of the maximum special tax rates by the New Home Company, the combined effective tax rate was 1.75%.”

The city is also reducing the term from 40 years in the original proposal down to 30 years.

Staff continues, “The reduction in tax rates significantly reduces bonding capacity. By our calculations, at current bond market rates, the net proceeds from the CFD bond would be reduced from approximately $12 million down to $8 million. Of this total, approximately $6 million would be used to reimburse New Home Company for Phase 1 infrastructure work in progress. This remaining $2 million would fund other potential improvements related to The Cannery.”

The question that must be asked is whether these compromises and reductions go far enough? Is the problem that the original CFD was simply too big or is the problem more philosophical?

Michelle Millet in her guest column on Sunday wrote, “When individual council members cast their vote on Tuesday on whether or not to approve the formation of the CFD, whose interest will they choose to represent – those of the community, or those of The New Home Company?”

Here she argued, “I understand that there is no free lunch, and that infrastructure cost associated with the development will be passed on to future Cannery homeowners, either through the formation of a CFD or an increase in the cost they pay for their home. But while the approval of a CFD has clear benefits for the developer, it has no clear benefit to future Cannery homeowners, or the Davis community at large, and instead has only potential negative impacts on both.

“While I appreciate the amenities The New Home Company has included in the Cannery Development, and the time spent on meeting with community groups and commissions, and their efforts to address the needs of these various groups, I do not believe that these actions obligate the city council in any way to approve their request for the formation of a CFD; to suggest otherwise sets a scary precedent for how our council will negotiate deals with developers in the future, especially large scale ones like those being currently proposed for future Innovation Parks on our towns peripheries.

One of the commenters on Sunday, wrote, “Career politicians need to scratch the backs of those whose hands feed them.  Follow the money and you’ll find the votes.”

We need to be completely fair here. First of all, there is nothing improper legally about these contributions, which were received within a day of each other. Second, at the time these contributions were made, the Cannery had just been approved and Dan Wolk seemed more likely than not to win an Assembly seat.

Obviously they were not made in some sort of anticipation of the CFD vote – the CFD wasn’t even on the radar screen at the time and there was no belief, even if it were, that Dan Wolk would be on the city council.

Dan Wolk has been fairly consistent on the Cannery, at least since his first meeting on the subject – he has been supportive of the need for new housing for families in Davis.

He sang the praises of the Cannery at the State of the City Address in January, which he said “reestablishes Davis as a leader in innovative housing.” The mayor said that we have two demographical issues in Davis – the cohort of those between 25 and 45 years old, “that demographic is shrinking. That really is concerning for the future of our city.”

At the same time, one of the biggest concerns that “good government” people have is the corrupting influence of money in the system. Whether The New Home Company actually bought influence with Mr. Wolk, let alone his vote, seems questionable. But the average citizen doesn’t have the access to that kind of money.

The typical citizen does not have $8600 to give from four different entities. There is no legal conflict of interest here. However, the appearance of conflict is troubling. We want to make sure that our public officials are considering all interests, whether they have money or can deliver voting blocs or whether they are simply individuals with modest means.

On a 3-2 vote as the Cannery was in November of 2013 as well as a month ago, one vote can change the entire outcome.

These are questions that we have to ask. Clearly the council heard some of the community dissent and worked with the home builders to reduce the size and scope of the CFD, and the question really is whether it goes far enough and whether any CFD can be acceptable.

38 thoughts on “Commentary: The Key Question is Who Will the Council Represent on the CFD Vote?”