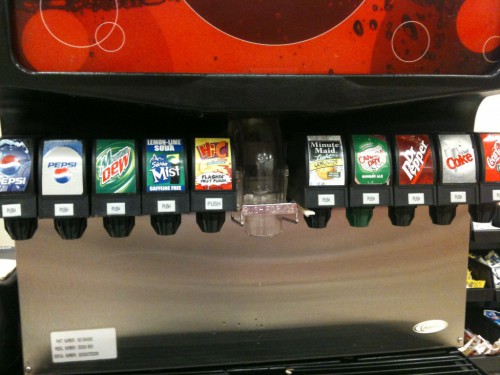 On May 5, the City Council will consider an ordinance to require Davis food service establishments to offer milk or water as the default beverage in children’s meals. The ordinance is being proposed as a way to address high rates of childhood obesity and diabetes, as well as other negative impacts of from sugary drinks.

Part one of this article looks at other government efforts to regulate such beverages. Part two will examine what researchers at UC Davis are learning about the health effects of consuming sugar-sweetened beverages.

SB 203 would require distributors and vendors of sugar-sweetened beverages to carry the following warning label:

The bill defines “sugar-sweetened beverage” as “any sweetened nonalcoholic beverage, carbonated or noncarbonated, intended for human consumption, that has added caloric sweeteners and contains 75 calories or more per 12 fluid ounces.”

The types of drinks subject to the label would include sodas, sweet teas, sports drinks and energy drinks. 100% pure fruit and vegetable juices were specifically excluded, although beverages sweetened with fruit juice concentrates were not. Also excluded were beverages consisting of a minimum 50% by weight milk or milk substitute.

Vending and other dispensing machines would have to post warnings on their exteriors.

SB 203 failed passage in the Senate Health Committee on April 29 but may be reconsidered. The lead author, Senator Bill Monning (Carmel), introduced a similar bill last year that died in the Assembly. Monning was not surprised at the vote. “It’s a tribute to the power of the sugar-sweetened beverage industry,” he said.

The bill’s major co-sponsor was the California Center for Public Health Advocacy (CCPHA), with headquarters in Davis. To raise awareness about the issue and SB 203, CCPHA developed and placed a series of ads featuring local residents in eight different newspapers throughout California.

Bob Achermann, executive director of CalBev, which represents the non-alcoholic beverage industry in California, wrote in February that SB 203 was bad public policy. “Addressing obesity and diabetes is more complicated than a warning label, and it’s misleading to suggest legislation impacting some beverages will offer a simple solution to complex health issues.”

Achermann also noted the beverage industry’s voluntary efforts. In 2010, the industry launched “Clear on Calories,” an initiative to make sure every can, bottle and pack carries clear and distinct calorie labels. In 2014, the industry started “Balance Calories,” in partnership with the Alliance for a Healthier Generation, to reduce per capita beverage calories by 20 percent by 2025 through increased availability and marketing of smaller portion sizes and no- and lower-calorie options.

CCPHA executive director Dr. Harold Goldstein commented on the bill, “Parents may know that drinking soda is not as healthy as eating broccoli, but they don’t know that sugary drinks, like sports drinks and sweetened teas, may be making their children sick. It’s time to post warnings on the front of the bottle.”

There is recent scientific evidence that Goldstein may have a point. Public health researchers at Yale University and Boston Children’s Hospital recently reported on a survey showing that parents have misperceptions about the healthfulness of sugar-sweetened drinks.

The survey of 982 parents of 2- to 17-year-olds revealed that 96% had provided from 2-9 different categories of sugary drinks to their children in the past month. Many parents believed that some sugary drinks are healthy options for children, particularly flavored waters, fruit drinks and sports drinks. Many also indicated that they rely on package health claims in their purchase decisions.

The City of Berkeley is the first city in the nation to impose an excise tax on sugary beverages. Measure D, which passed last November with 75% of the vote, imposes an excise tax of $0.01 per ounce on the distribution of sugar-sweetened beverages and the sweeteners used to sweeten them. This comes out to about a 12 cent tax on a standard 12 ounce can of soda. The tax is payable by the distributor, not the consumer.

The ordinance took effect on January 1, 2015, although the first tax remittances were just made in March of this year.

The revenue generated by the tax goes to the city’s general fund. The ordinance also established a panel of experts to advise the Berkeley City Council on how and to what extent the City should establish and/or fund programs to reduce the consumption of sugar-sweetened beverages and to address the effects of such consumption.

In October 2014, the Mexican Legislature passed a peso-per-liter tax on sugar-sweetened drinks. The goal is to reduce the obesity rate in Mexico, which, according to the United Nations, is the highest of all countries with a population exceeding 100 million.

The tax, proposed by President Enrique Peña Nieto, was part of a fiscal reform package. The proceeds are intended to be earmarked for drinking water in schools. Some communities have none, while in others it is not potable and bottled soft drinks are safer.  An internet search did not turn up any information on whether funds have been designated for this purpose.

According to a survey released by public health advocates in October of 2014, a majority of Mexicans said they had reduced their consumption of sugary drinks and were relating soda to health problems.

In March, the Mexican Supreme Court held that the tax was constitutional.