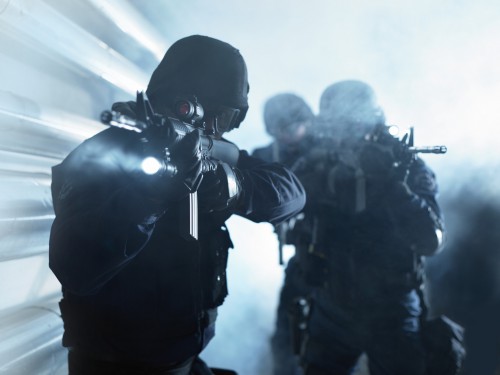 The New York Times is reporting that President Obama today will “ban the federal provision of some types of military-style equipment to local police departments and sharply restrict the availability of others, administration officials said.”

In January, a federal task force concluded that police departments should not be able to use federal funds to acquire military-style weapons such as armored vehicles, firearms and ammunition, as well as camouflage uniforms.

The President will promote this new policy during a visit to Camden, New Jersey. The Times reports, “The city, racked by poverty and crime, has become a national model for better relations between the police and citizens after replacing its beleaguered police force with a county-run system that prioritizes community ties.

“Mr. Obama is expected to hold up Camden as a counterpoint to places like Ferguson, where the killing of a young black man by a white police officer last summer and the violent protests that followed exposed long-simmering hostility between law enforcement agencies and minorities in cities around the country.”

On Monday also will be a report from a policing task force the President formed last year in response to events in Ferguson. The report contains dozens of recommendations for agencies throughout the country and calls for law enforcement agencies to “embrace a guardian — rather than a warrior — mind-set to build trust and legitimacy both within agencies and with the public.”

The key in Ferguson was not the police shooting or the uprising, but rather the police response to the unrest that led to fears about the militarization of the police and the undermining of trust. It was that backdrop that Davis reacted to after receiving the MRAP (Mine-Resistant Ambush Protected vehicle) last August.

In addition to prohibiting certain equipment, the President will also greatly restrict other military-style police items, such as wheeled armored vehicles, pyrotechnics, battering rams and riot gear, and will require more stringent requirements for training and information collection for departments that acquire them.

“We are, without a doubt, sitting at a defining moment in American policing,” Ronald L. Davis, the director of the Office of Community Oriented Policing Services at the Department of Justice, told reporters in a conference call organized by the White House. “We have a unique opportunity to redefine policing in our democracy, to ensure that public safety becomes more than the absence of crime, but it must also include a presence for justice.”

Transparency on Police and In-Custody Deaths

In this weekend’s Sacramento Bee, Dave Maass, a former staff writer at the San Diego City Beat, writes, “It took three weeks for the people of Maryland to learn that Freddie Gray’s death from a spinal injury while confined inside a police van had been ruled a homicide. That wait helped fuel riots in the streets.”

He calls on his experience investigating the San Diego jails to call for the “public and Legislature to ask whether law enforcement agencies can be more transparent about deaths in their custody.”

In 2014, 679 people died in custody in California. 150 of those deaths occurred during the arrest process, including 88 who were shot and killed by police. Another 70 committed suicide in jails and prisons. Also, and perhaps most alarmingly, there were 150 cases where the cause of death is still listed as pending.

“On paper, the status quo looks pretty good. Any time a person dies in police custody or in a jail or prison, state law sets a 10-day deadline for the agency in charge to submit ‘all facts’ in its possession to the state Attorney General’s Office. The law explicitly states that these filings are public record.

“But as a journalist who spent more than three years investigating the San Diego County jail system – which at one time had one of the highest death rates among California’s largest jails – I’ve seen how this law has been allowed to atrophy to the point where agencies hardly take it seriously.

“In reality, the state attorney general has reduced these reporting requirements to a single sheet of paper with a series of check-mark boxes that provide only the most basic information. It can take weeks, if not months, to get the data under the California Public Records Act.”

Mr. Maas also find that, even when the data arrives, “you find that there’s little to no auditing. It has been 10 years since the Attorney General’s Office analyzed the death data; that four-page report concluded that in-custody deaths were on a steep rise, but ‘due to limited resources,’ the agency wasn’t able to dig further.”

He has figured out ways to dig deeper, but he writes, “Investigative reporters know the tricks to get these records, but families do not. Time and time again, I’ve spoken to relatives who were told literally nothing about how their loved ones died.”

Mr. Maas argues for the prioritization of death-in-custody transparency. He writes, “Assemblywoman Shirley Weber’s Assembly Bill 619 is a start. The bill adds new categories of information that law enforcement agencies will be required to produce, and orders the attorney general to issue an annual report and to begin publishing the data online. This is especially important since the Attorney General’s Office says it will not be collecting as much arrest-related death information this year due to a change in federal reporting requirements.”

The Blue Wall of Silence

There was an interesting piece this past week in BuzzFeed, where they talked to former Baltimore police detective Joe Crystal, an up-and-coming police officer – until he watched a fellow officer beat up a handcuffed suspect. After breaking ranks, and reporting the assault, he was run out of town with his career ruined.

Mr. Crystal witnessed the incident on October 27, 2011, and three years later he resigned from the police department. As BuzzFeed described, “he witnessed an off-duty cop brutally beat a handcuffed suspect, saw a detective cover it up with a police report full of lies, and watched his sergeant approve the whole thing.”

He was supposed to keep his mouth shut, but he didn’t. As they write, “He broke the ‘blue wall of silence’ and blew the whistle on his colleagues, and the way many of his fellow officers saw it, he had sided with a small-time criminal over his brothers in blue. The harassment and the threats followed. His career as a Baltimore police officer crumbled. Police in Baltimore have rallied around cops who have killed or beaten suspects, cops facing criminal charges, and cops who turn a blind eye to misconduct. But one thing some Baltimore police couldn’t tolerate was a ‘snitch.’”

The BuzzFeed article is a long and fascinating article, that sees Mr. Crystal return to Baltimore during the unrest.

He became a poster child for why police do not “snitch.” He was subjected to harassment. He turned to the police union, but it did little to help him.

When he tried to transfer to another unit, he was told that he could not “because he had snitched.” BuzzFeed writes, “Crystal had crossed the blue wall of silence, a code among officers remarkably similar to that of the outlaws they arrest. The problem was not just that he had broken code, the lieutenant was suggesting, but that other officers could no longer trust him.”

Mr. Crystal testified against his fellow officers – one was convicted of misconduct and sentenced to probation, while the other was convicted of assault and obstruction of justice and served 45 days in jail.

The trial put Mr. Crystal’s experience in the spotlight. But things did not improve and on September 3, 2014, Mr. Crystal resigned from the Baltimore City Police Department while the two officers, who had been convicted of crimes six months earlier, remained on the force.

BuzzFeed writes, “Not all — perhaps not even most — officers within the department disapproved of what Crystal had done. Sgt. Lisa Robinson told the Baltimore Sun in May that she hoped the Department of Justice review of the BPD, which came in response to Freddie Gray’s death, would look into ‘the “stop snitching” culture that is prevalent on the streets of Baltimore as well as within the Baltimore Police Department.'”

Furthermore, “Crystal had become a cautionary tale within the Baltimore police force.” However, “To many on the outside, though, he had become a symbol of the integrity that every officer should strive for. In December, Crystal filed a lawsuit against the department on charges that it violated whistleblower protection laws, and national news programs picked up the story. ‘Hero cop,’ one news anchor dubbed him.”

The article notes, “Freddie Gray’s death brought more attention to Crystal’s experience, and he did more cable news rounds in the days following the riot. During a town hall at Morgan State University, the moderator asked what people wanted to see changed in the police department.”

The article continues, “‘I’m just gonna mention one name: Detective Joe Crystal,’ said a man in the audience. ‘The administration did not support him, the Fraternal Order of Police did not support him. … If we can’t protect police officers, how are citizens gonna…’  but the applause drowned out the rest of his answer.”

The article notes, “The public support, however, didn’t do much to help Crystal’s career. None of the big city police departments he reached out to responded. “

Defenders of the police argue that there are a few bad apples in a police department. That is probably true. The problem is that the culture is such that no one will defend the good police officers – the Joe Crystal story sounds eerily similar to the story of Frank Serpico from 40 years ago in New York.

46 thoughts on “Monday Morning Thoughts: Obama To Demilitarize the Police?”