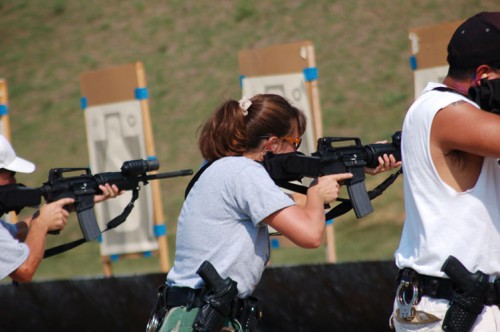 The Davis Police Department faces a continual challenge in recruiting new police officers. In the second of our two-part series, the Vanguard talks with Assistant Police Chief Darren Pytel about the current challenges and the new strategies they are working to implement.

According to Assistant Chief Pytel, Davis has been getting a fair number of applicants, but they are not successful getting them to the stage of testing. Typically they will get about 40 initial applicants, but only 20 will show up for the physical agility test, which represents the first hurdle.

One they get them to the physical agility test, most of them will make it through that portion. However, then once they get to the interviews th department loses at least three-quarters of the applicants due to things like background issues or the inability “to put a sentence together.”

A huge problem is Brady material. Many of our readers will be familiar with the Brady v. Maryland Supreme Court decision and its requirement for prosecutors to disclose exculpatory evidence to the defense, but police officers are required to disclose background information that might impeach their characters as well.

Issues in the background can go towards assessing the judgment of the officer and can be used against the police.

What Assistant Chief Pytel told the Vanguard is that many of the applicants appear to be very good, but as soon the interview starts getting into their backgrounds, red flags get raised.

Assistant Chief Pytel identified three problems that are interrelated. First, right now law enforcement is not seen by young people in a good light. They are not getting the same number, as in the past, of young people who think of this as a career option. People don’t look at public service like they used to. And, for police officers, applicants really need to have the desire for the career in their blood to be successful.

Who wants to be a cop? They need to have a lot of passion. Darren Pytel explained that people rarely succeed who don’t put forth the effort and don’t have the passion. It is not something where you can wake up one day and be a cop. Somewhere along the way, they need to get that bug and become very driven.

Third, there is a money issue. Mr. Pytel told the Vanguard, “If we offered more money, we would get a larger applicant pool, but it remains to be seen whether we can hire some of those. But we would at least compete for the better applicants.”

However, even the money issue is tricky. Part of the problem is that Davis is actually fairly competitive when it comes to total compensation, but lacks on the base salary. Assistant Chief Pytel believes that is a problem for 24-year-old applicants who want to be able to buy a house or a car, but aren’t thinking about their retirement or other benefits yet.

During the budget discussion on Tuesday, the city laid out some of their enhanced recruitment options which includes hiring a police trainee position as a temporary part-time position and a community service officer, and providing tuition reimbursements to help attract potential police officers who are completing their required education.

This would include the addition of $10,000 for tuition reimbursement and $6,000 for Police Academy Tuition expenses. This is offset by $6,000 in reimbursement revenue from the Commission on Peace Officer Standards and Training (POST). So the city would recoup some of that money on the back end.

As Darren Pytel explained, moving forward, they want to expedite the hiring process. Right now there is a three-month pipeline and that ends up losing a lot of potential applicants who find work elsewhere before the department even processes their applications.

The department is looking to cut out the physical agility on the front end since that doesn’t seem to be a hurdle anyway. They will increase their commencement of the first round to every two weeks – determining whether the applicant can pass a background test and then sit down with the assistant chief and a hiring lieutenant to determine whether the applicant can be a good cop in Davis.

One of the points he made earlier is that a lot of the applicants cannot put a sentence together, and that is not going to fly in a community like Davis where they have to be able to speak intelligently to well-educated people.

In the longer term, as we mentioned, they want to change the hiring process to be able to put their own people through the academy. The CSO position, or Community Service Officer, is one approach. They would be getting a bunch of 18- or 19-year-olds to be hired part time, before, as Mr. Pytel put it, “they screw up their background.”

They would be part-time employees and work toward getting at least an Associate’s Degree. Then after a couple of years, the department would put them through the academy.

In addition to helping to create their own pipeline, the department would have a better chance of attracting minority candidates.

The disadvantage right now that Davis has is that the big departments like Sacramento or Oakland have the ability to find good candidates, put them through the academy and actually get them some salary and benefits while they are doing it.

Davis gets stuck with what few candidates remain. People who put themselves through the academy have to be able to survive not working for 30 weeks. By creating the CSO program, the city would pay only $13,000 or $14,000 a year to people working 20-hour weeks. They would get about $20,000 to $25,000 to go through the academy and the tuition is reimbursed to the city by POST. The department would also supply equipment, which is not a huge cost.

In short, Darren Pytel hopes this program can help attract people who might otherwise not be able to apply for a position with the city of Davis.