The Vanguard this week sat down with Assistant Chief Darren Pytel and this is the first of a three-part series that looks into crime, recruitment, and staffing for the Davis Police Department.

There has been a lot of concern about the impact of AB 109 which was signed into law by Governor Jerry Brown. The bill created a program known as realignment, which transferred low-level offenders from state prison to local custody. The law also created split sentencing guidelines that mandate post-custody mandatory supervision as part of the effort to rehabilitate offenders with community-based programs once they are released from custody.

Three years later, the voters overwhelmingly approved Prop. 47, which reduced the penalty for non-violent offenses, such as drug offenses and petty theft, to misdemeanors.

One of the key points that Assistant Chief Darren Pytel raised in our interview was that it is really too soon to gauge the effect of either law on the crime rate. A preliminary study that the Vanguard cited recently, from a year ago, concluded that there was no statewide pattern between AB 109 realignment and crime. A study from the Center on Juvenile and Criminal Justice found “no conclusive trends demonstrating a causal relationship between Realignment and crime, even among counties in close geographic proximity.”

They concluded, “The lack of a clear pattern—in fact, it is hard to imagine a pattern that is more ambivalent and complicated—indicates the perils of drawing hard conclusions about a single, albeit important, public policy change such as Realignment based on short-term crime trends.” 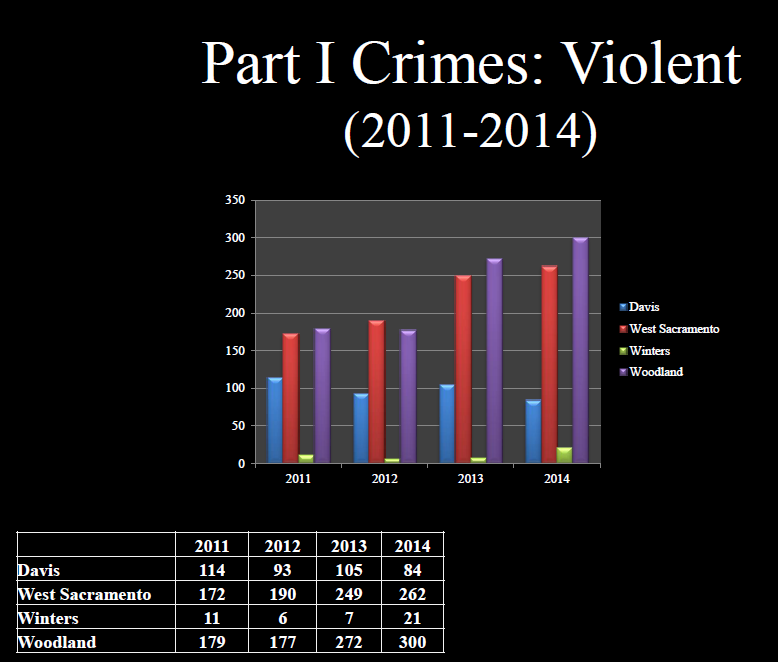 Recently a reader has cited anecdotally a number of violent crimes in Davis and expressed concern about the increase of such crimes. However, Darren Pytel told the Vanguard there is “no spike in violence crimes in Davis.” Woodland is seeing a spike. But “what we’re seeing is what we predicted we’d see.”

On the other hand, both West Sacramento and Woodland have seen spikes in violent crime rates. 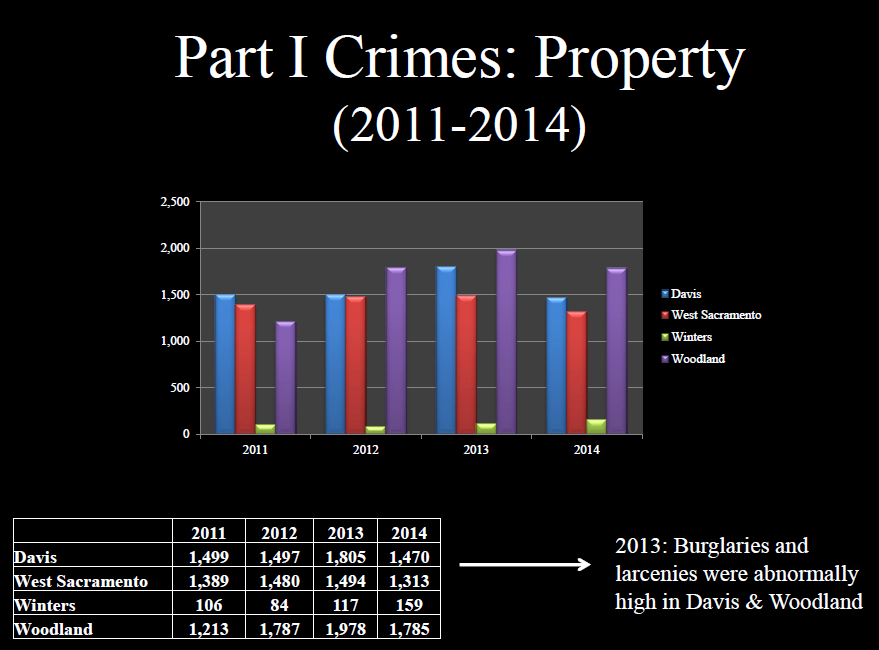 Instead, what Assistant Chief Pytel says Davis is getting killed with right now is larcenies. The data from the county shows that Davis suffers a relatively high rate of property crimes when compared to West Sacramento. Those numbers, however, were fairly steady – except in 2013 when Davis saw a huge spike in the first part of the year.

Assistant Chief Pytel told the Vanguard that what tends to happen is that they catch prolific thieves and the crime rate goes down, but then it goes back up.

One thing they are having a particular problem with is bike thefts. He said that people are coming in from out of town, loading up on bikes. They used to recover a lot of these bikes, but that is now changing. They are seeing an increase in higher-end thefts – and they have gotten some back on Craigslist, but a lot of the bikes have left the area.

Assistant Chief Pytel told the Vanguard, “It is concerning, I don’t think it’s necessarily new.” Property crime has been bad for 30 years. Davis, he said, has “always had a high larceny, burglary rate.”

As stated, they have had some success with catching these thieves at times and the rates have gone down, but after a few months someone else moves in and the incidents tick back up.

None of this is particularly surprising. What Darren Pytel told the Vanguard is that who is going to prison has changed significantly because of AB 109 and now Prop. 47. The problem, he said, is drug related. A whole bunch of people who are using, he says, then steal to support their addiction.

The low-hanging fruit is the drug use. It is fairly easy to catch someone in possession of drugs. Under the old rules, for the second offense, the offender would go into custody for 18 months to three years. But now, with Prop. 47, those are misdemeanor offenses and most are not going into custody at all.

Assistant Chief Pytel told the Vanguard it is far more difficult to catch someone committing a theft. The result is that, with the decrease in incarceration for drug offenses, the number of thefts and burglaries has jumped up.

He told the Vanguard that, other than Los Angeles county, no one has really looked at where we are at with all of the changes. Short term, they believed that property crimes would go up and that has played out. But longer term, it will take time for the back end of the system to work out recidivism.

Darren Pytel actually suggested that we might be able to really know the impact all of this eight years down the line. It is not just the sentencing reforms, it is also the freeing up of resources for post-custodial services.

For instance, the early studies have shown a relationship between spending on re-entry services and a positive impact on recidivism. But prison officials believe that it will require three years’ worth of data to study recidivism rates and most counties are complaining that they haven’t been provided adequate resources to handle the influx to their jails.

Earlier this year, Yolo County DA Jeff Reisig noted, “It was also assumed that there would be money for treatment, but that’s not true. There is no money from Prop. 47 until potentially 2016, and even that is yet to be realized.”

However, there is a belief that down the line, once these resources are more clearly defined, the programs will begin to eat away at the 70 percent statewide recidivism rate that we face and crime rates will start to drop.

Assistant Chief Pytel warned that, until they actually deal with issues such as alcohol abuse and drug abuse, there will be no headway on larcenies and property crimes. In the short term, therefore, property crime rates will go up, but if everyone does their job, he said, they will reduce recidivism and these programs will have a chance to work.