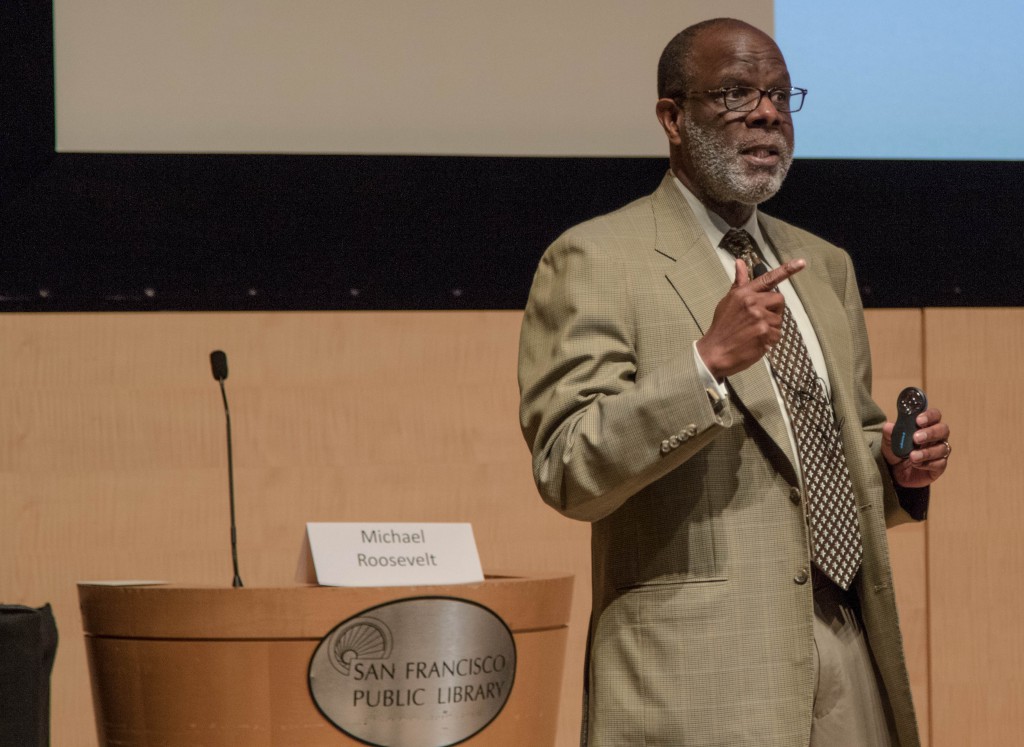 Michael Roosevelt, an expert in implicit/unconscious bias, who has trained thousands of attorneys, judges and police officers, gave the keynote address at the San Francisco Public Defender’s Justice Summit.

He opened his remarks stating, “It is critical at this juncture that we let no one off the hook. It is time to address critical issues around the issue of race and implicit, now what we call, unconscious bias.”

He explained that a lot of time is spent on explicit bias, which he said “are the things that we hear, we see, we observe, and we call it racism or white supremacy.” However, he said, “The fact of the matter is that we’re all hardwired in our unconscious minds, that we are not aware of, that we have those unexpressed in a verbal way, but they get expressed in other kinds of ways.”

Mr. Roosevelt explained that the brain is really primed to make a lot of quick decisions based on a lot of information. “So the research shows, the people that study the brain, it shows that we tend to categorize. This is a normal process.”

“We have a preference for people based on group identity,” he continued. “This is a fundamental process. That we look at something and we place it in a category.  Our ability to categorize,” he said, “is really indispensable. We can’t do without it.”

We have to find these shortcuts and a way to describe our social reality. Mr. Roosevelt cited three categories that we immediately identify – race, age, and gender.

Race, he said, is really important for something called schemas. He explained schemas in this way: “Our brains encode information about groups of people into our memories along with favorable or unfavorable impressions and values. These are called constructs.”

Michael Roosevelt likened our brains to computers in this sense that they are programmed. This programming, he explained, comes from all our experiences – the media, culture, background, family – and “it informs the information that goes into our brains.” This encoded information “becomes part of the associations that we make.”

“I call it ‘Michael with a hoodie on.’ When I have my nice suit on, there is a different reaction to me,” he continued. “But after 5 pm, I have my hoodie on, implicitly I become a danger. I become somebody in the out group. No longer the in-group.”

“We tend to look at the other people as all the same and we look at our group as unique,” he said. “This is critical. Sometimes we make in the brain, what we call exceptions to the rule.” Or, as he put it, imitating the effect: “You are not like the other black people. I don’t think of you as being black.”

Stereotypes are important concepts. “These are things that we generalize about a group, based on some shared characteristics,” he said. “Often times stereotypes involves projection – what we want to believe about that group.” This is often related to the fact that we have had limited experience of interactions with that group.

“These stereotypes can be dangerous,” he warned.

Michael Roosevelt talked about a game called “shoot/no shoot.” The participants were shown people holding an object that is ambiguous as to whether it is a weapon, and asked to determine if they are a threat and therefore should be shot.

“What they found is that people shoot more quickly if the person holding the object is black than when he is white,” he said. “They shoot more quickly. There’s something about the brain that says black man, danger. It triggers an immediate response.”

Mr. Roosevelt explained that we saw that in action with the Tamir Rice situation, where the young African-American kid had a toy gun. According to the report, the officer said “stop drop it, three times,” over about a two and a half second period of time. “The car was still rolling when they shot and killed him,” he told the audience.

“They made a quick association, shot and killed him,” he said.

Interestingly enough, Mr. Roosevelt said, the study found that police are actually a little better at shooting the right targets with the gun than the average citizen. A little bit better, but not much better.

However, he said, “Officers do poorly when it comes to figuring out gangs. They tend to shoot more quickly and accurately when they’re in an area that’s sort of gang related.”

How did they learn this? he asked. Their training, he explained. Mr. Roosevelt told the story of how a Florida police department used mugshots of black men for target practice.

“The only reason this became public is that one of the persons who was in the mugshot, his sister was in the military and she somehow saw and was shocked” to see her brother’s image used for target practice, Mr. Roosevelt said.

The chief defended the department “but denied racial profiling and said officers used  images of people of all races.”

Michael Roosevelt cited other research that showed that blacks with darker skin tones, the longer the sentence you are likely to get. A Stanford study showed “that the darker you are, the more likely you are to get the death penalty.”

“Studying this, it’s critical that if you don’t change the mindset, the moving that brain to thinking about people differently,” he said we will end up with more shootings of African-American men and they will get more time in prison.

Implicit bias, Mr. Roosevelt explained, really doesn’t change based on intelligence level. He explained, “Cognitive scientists also believe that these early stereotypes or beliefs (i.e. implicit biases) about groups of people continue to exist at an unconscious level, despite our brain’s increasing ability to reason, understand, and exercise judgment as we mature.”

These biases he explained, are also environmental. For example, “if we are in a certain neighborhood, we know we need to be more ready to shoot. In a certain kind of environment, we’re more prone to act in an aggressive way.” He said, “We call this affective realism.”

Michael Roosevelt then talked about the text messages, which he said are not “implicit bias, but rather San Francisco bias.” These are police officers, he said, pointing to the transcripts on the screen, exchanging racist messages on the public dime “and calling African Americans, monkeys.”

“One would say, this wouldn’t happen in San Francisco,” he said. “Well let me tell you – it happens in San Francisco. That’s not implicit bias, but it comes from a place where they learn unconsciously to devalue groups of people.”

He spoke about Yulanda Williams, he read the explicit portion of that exchange and pointed out, “This is a colleague. They thought they could express that form of racism and bias and there would be no accounting for it.”

“People often say this, our young people are less biased today than we were… the stats don’t support that,” he said. “Witness what happened on that bus when they were all singing the song about ‘no niggers can join this club.’ A fraternity. These were young college students. They weren’t born in 1957.”

He said, “It is not about age, it’s about how the environment, how the world that you’re in, how your culture shapes this.” He said, “It’s critical that we understand this.”

Michael Roosevelt gave an example of a member of the Oakland Police Department who has killed four African-American subjects. “Now how does that happen?” he said, noting that the problem goes beyond San Francisco. “Most officers never pull their guns. You have a trigger happy, wild eyed murderer out in the police department.”

In order to address bias, he said, we need to first have accountability. He said, without accountability, you cannot address bias. That means, he said, “Community people, policing the police.” He said they can’t rely on the “fox to guard the chicken, we know the outcome.”