When the racist text messages sent by at least ten members of the San Francisco Police Department came to light, Sgt. Yulanda Williams was one of the officers of color personally targeted – by name.

Sgt. Williams is president of Officers for Justice, an association of SFPD officers formed in 1968 to advocate for the civil rights of minorities, women and LGBT people. One of the texts refers to her with a derogatory phrase offensive to both black people and women.

On Wednesday she spoke on the panel at the SF Public Defender’s 2015 Justice Summit, hosted by SF Public Defender Jeff Adachi. Mr. Adachi noted that this has been portrayed as an isolated incident. He asked Sgt. Williams to tell the public just how deep this goes.

Sgt. Williams responded, “We know that this is not an isolated incident. This problem is systemic within the San Francisco Police Department and unfortunately there have been some who have chosen to turn a blind eye.”

She said that some members of the Officers for Justice have been on the force for over 30 years and can recall similar incidents, even incidents far more egregious than the text messaging scandal.

She cited a consistent problem with the disciplinary process in the police department. She said, “When a minority officer stands before members of the command staff or the commission, unfortunately when their cases are heard, minority issues are dealt with a little bit more severe – the discipline (given to minority officers) is more severe.”

Sgt. Williams said “I stand before as a woman who was called… a NIGGER BITCH… I’m going to tell you something. First of all, it’s offensive to any female that has risked their lives on a daily basis for the citizens of this city. We entered into this position considering it a noble one and that is why we gave our lives and we committed ourselves to serve and protect the citizens of San Francisco.”

She put blame on both the police chief and the mayor. The mayor, she said, has refused to meet with them. The police chief had a chance to get out in front of this issue and took the politically expedient route. The chief, she said, “has yet to address the rank and file members of this police department.”

“I don’t care that it was only a handful,” she said. “It still reeks of corruption because where there’s that one percent, there still could be more.”

Yulanda Williams said that she was making this public now that the Officers for Justice had heard rumors that the text messaging incident had occurred. That was the Thursday prior to the story breaking. She called the chief to find out if the rumors were true.

Yulanda Williams was disappointed that the chief did not forewarn her that her name had come up and that something was coming out. “At least give me the decency and the respect to tell me that there’s something that I should be concerned about,” she said. “To me that almost feels like betrayal because you don’t do that to your family.”

“Because I’m black, I can never be blue enough for you,” she said with both anger and hurt. “Shame on you. Shame on all of you.”

Sgt. Williams said that “we need to develop a think-tank task force.” The task force would have black and LGBT groups, representatives from the police department, a member of the Board of Supervisors, Mental Health Professionals and community activists. “We need to do a climate survey on every officer in the city and county in San Francisco.” Are they suffering from post-traumatic stress disorder? What is weighing on the police officers?

“This climate survey will help determine how deep-rooted this racism really is,” she said. She realizes that this is “a taboo subject” but is afraid that if we do not do something, that Ferguson, Baltimore or Watts could be the reality that San Francisco faces.

Police Chief Greg Suhr could not make it, but he sent, in his place, Commander Toney Chaplin.

Commander Chaplin said that body cameras are coming to San Francisco. “A draft policy is making its way through review as we speak,” he said. “Personally I believe nationwide every law enforcement agency is going to be deploying body cameras. I’m definitely in favor of them.”

“I’m in an unenviable position of being African American and being a cop,” he said. “This is a tough time for most of the members of the San Francisco Police Department because people that they call a friend (sent those text messages)… and we found out by watching the news.”

He said he was a classmate of Yulanda Williams and that she has always had this fire burning in her.

“For some many years people have described bad treatment by the police and nobody did anything because who could back it up,” he said. “I think body cameras will give us that evidence of proof to either clear the officer or to allow us to move against the officer for something egregiously done. So I’m a big proponent of the cameras.”

“Why not? We use them for every other crime,” he said, noting that there are crime cameras all over the city. “I think it makes our job a lot easier not harder.” 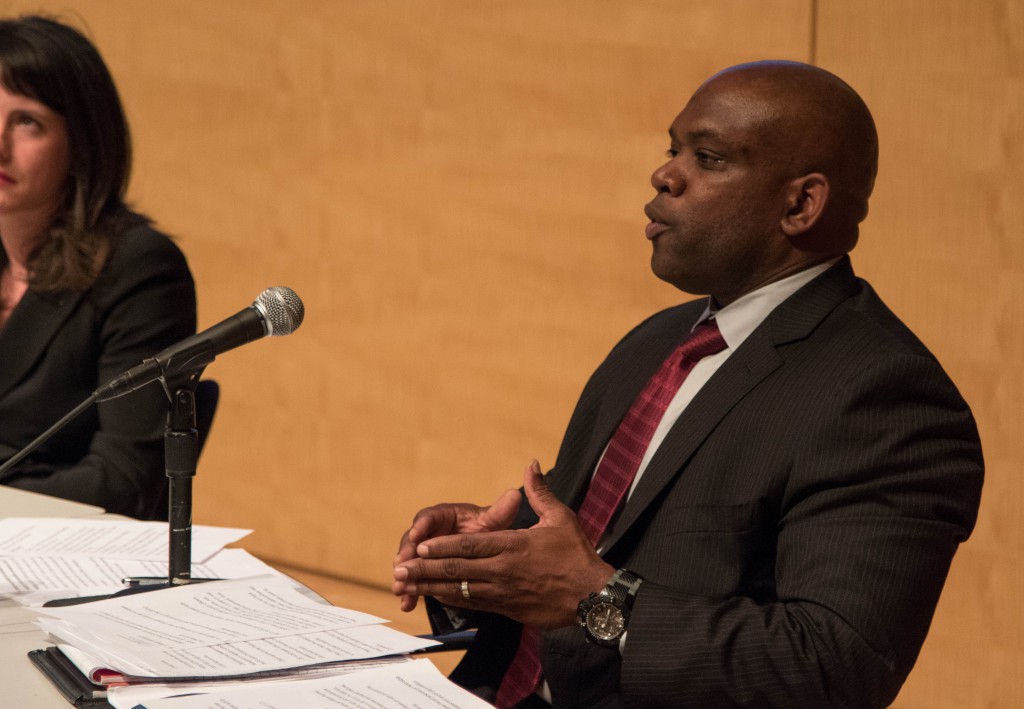 Commander Chaplin said that there “is a lot of self-reflection going on, not just in the United States but in the world.”  He said he felt that something should have happened well before now and he expressed sadness at the events happening nationwide.

He said that the chief made the recommendation to fire those officers involved in the text messaging scandal because, in some of those cases, there is nothing that can be done to change the officers’ actions.

Commander Chaplin related to own his own bad experience with the police prior to becoming a police officer. He said he went clubbing down in the South Bay. He said he wouldn’t go into details but, “It almost stopped me from being here sitting in front of you.”

Mr. Chaplin continued, “I apologize if I offend anybody, but I wasn’t shocked by any of it [that which came out on the text messaging scandal], because most of us African Americans have experienced it throughout the years.”

He said a lot of African-American police are questioning the people they thought were there friends. At the same time, he said that it’s a great time for this country because things that have been talked about and whispered about for years are finally coming out into the open.