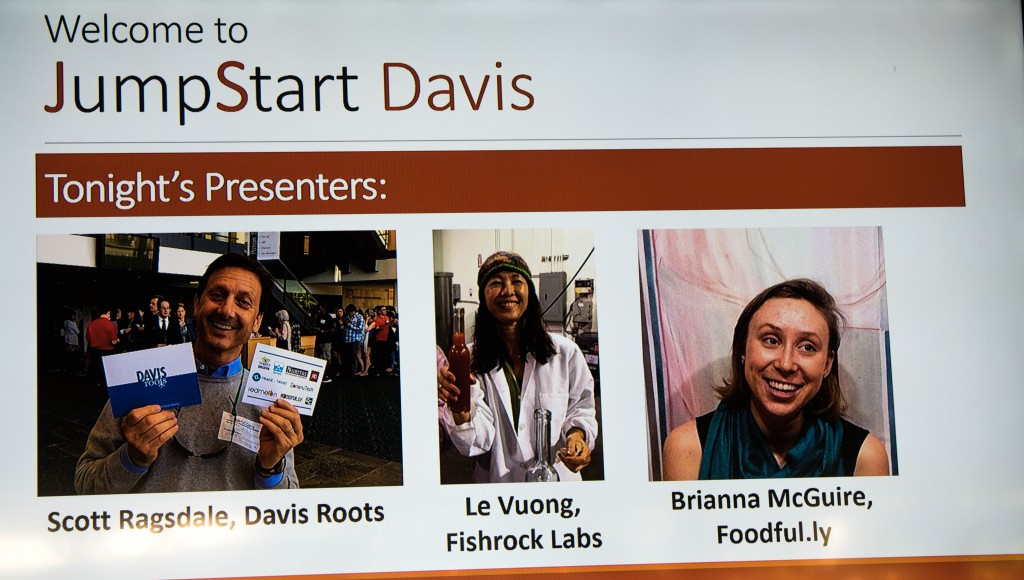 JumpStart Davis returned to Sophia’s on Wednesday night to highlight Scott Ragsdale of Davis Roots and two other startups that went through Davis Roots – Le Vuong of Fishrock Labs and Brianna McGuire of Foodful.ly.

Scott Ragsdale is the new general manager of Davis Roots, described as a “business incubator.” The mission of the incubator, Mr. Ragsdale said, is “to provide an acceleration of startup activity for resident companies in particular giving them mentors and advisors for the purpose of giving them opportunities to advance in Davis and the broader community.”

Davis Roots is a 501(c)3 non-profit and “the city of Davis is actually a partner with us in creating the equity share that’s created from the incubator companies.” Davis Roots is located in the Hunt-Boyer Mansion in Downtown Davis located on the corner of 2nd and E.

“We are open for business in terms of taking in new innovators that would like to be considered for residency – this is an open platform,” he said. He called it a unique partnership between Davis Roots and the city of Davis. “Not a lot of incubators have a civic partnership that is arm-in-arm with their incubator,” he said.

Mr. Ragsdale covered nine Roots companies during his presentation spanning the gamut from health care to biotech to financial services to programming and robotics. A lot of these companies have been featured in previous JumpStart Davis events.

Two of those companies presented on Wednesday night.

Le Vuong of Fishrock Labs said of her challenge as a student in food technology: “My challenge is to find a food-based source of beta carotene for children and women in developing countries.” She said, “Malnutrition is still prevalent in the rest of the world.”

“Retinol which is very important for the immunity and for the mobile growth of children and young mothers in Vietnam where I was born is still prevalent [but] even though retinol is so abundant in food and in meat and fish,” she continued, people are not eating enough of the right food. “Beta carotene is a precursor of retinol and in other parts of the world where people rely on vegetables for food, they can deliver beta carotene.”

“Beta carotene to me is a more sustainable source to prevent the problem,” she said.

Ms. Vuong said there’s a food in Vietnam that you don’t see in the United States, it’s bright red – it’s a type of melon that indigenous to Vietnam. It is very resilient and prolific. However it is mainly used during the season to dye rice red.

“I took some of it to the lab here to analyze it, and was so surprised that it had 70 times more lycopene than tomatoes and ten times more beta carotene than a carrot,” she said. “Not only that but it’s full of oil. It doesn’t have much flavor – so just imagine a huge olive.”

Ms. Vuong explained that the fat produced by the red melon is “a good fat” that contains the kinds of essential fatty acid that your body does not produce but it is essential and it has to come from diet. “the lipid from red melon is 30 percent fatty acid.”

They performed a clinical trial in Vietnam and found that the beta carotene in the red melon not only helps supply an essential fatty acid but it improved the hemoglobin in children. They did a follow up study to determine why this was the case.

As she pointed out, this was a crucial study because among the health problems suffered by these children is that many were anemic. “The malnutrition anemia is something very common among these children.” She explained that just giving them iron is insufficient to solve this problem, nor is giving them Vitamin A enough.

“There’s something else – the synergy of all these nutrients work to improve their anemia and also their Vitamin A status,” she explained. That led her to search for a way to retain this nutrient in a way that is easy for people over there to consume.

She came up with a press “because in these villages people don’t have a way (to store the melon because) they don’t have a refrigerator – so during the season they have this fruit but after that, after two months, during the summertime, that’s when the nutritional status worsens. We came up with a way to press the oil so they can retain it throughout the year.”

She explained by doing so she developed a process and patented it. She started the company three years ago – Fishrock Laboratories to bring this product to the market because not only will it benefit this population but other populations in the world that need this nutrition.

Having a market for the fruit will also encourage the population to continue to grow the fruit. “If we have the technology so they can develop a product they can sell,” it allows them to not only improve their nutrition status but “also to improve their household economy because instead of growing a cash crop which has very little nutritional value they can grow red melon.”

Brianna McGuire of Foodful.ly described a guy called “Armante” who “enjoys fresh and delicious food,” but she said, “sometimes he forgets what he buys,” and something “gnarly like that penicillium will grow on his strawberries or his other fruits and vegetables he has and he’ll end up throwing it away. He hates it when he throws away his food.”

“In fact we should be worried – we throw away about 50 million pounds of food a year, it’s now the single-largest contribution to our landfills,” she said.

Another problem that she cited was people will buy food that is on sale but really won’t know what to do with it. She explained, “What Foodful.ly tries to do is address those two problems that are most likely to get you to waste your food and that is forgetting about what you’ve bought or not knowing how to cook what you’ve bought.”

Ms. McGuire explained, “We believe we have the team and we have the drive to make that a reality.” 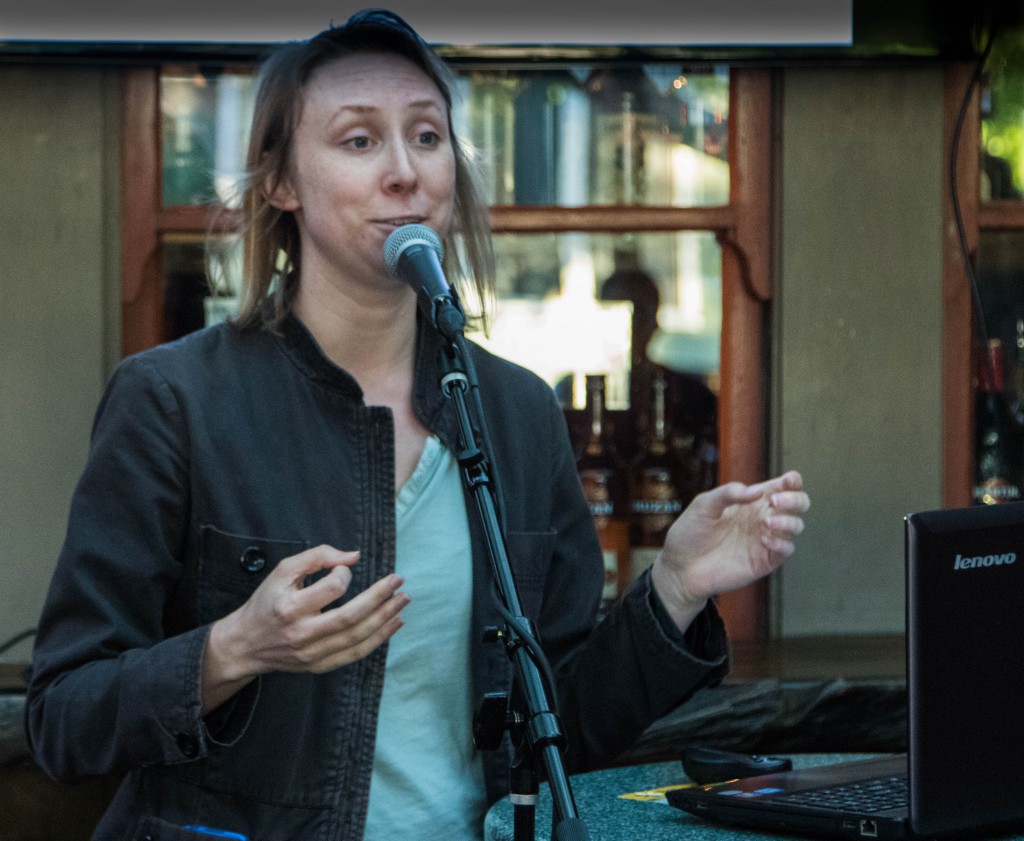 Foodful.ly’s solution is mostly a software solution. The first thing they do “is send you a reminder so that you know what food you should use.”

Second, “We send you recipes that are appealing an appropriate to your skill level so that you not only know what food you have on hand and you don’t forget about it, but you know how to use it.”

Finally they have a mechanism to determine when people’s food is most likely to go bad.

“We also use learning algorithms so that we know what you buy most regularly, we know what recipes you like to cook so we can help suggest things the next time you’re most likely to go to the grocery store.”

They plan to monetize through driving growth of users and with those enormous amounts of users, they plan to provide them with promotional offers from various partners where they can extract some revenue. The service will be free for people to use and then it will be valuable to their partners who can market their products to people most likely to use them.

She noted that for many people they get coupons at the least effective time – when they are leaving the grocery store. “What you really want is to have the coupon delivered to you right when you need the item,” she said. Foodful.ly allows them to determine when they are likely to go shopping and get deliver the promotions at that time.