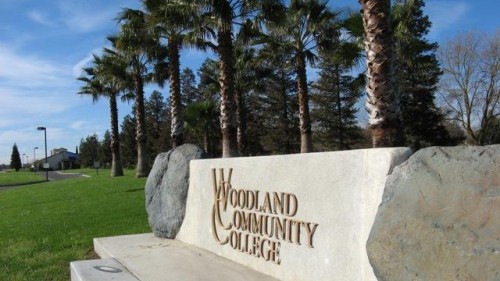 On March 11, 2015, a flyer was placed under the Ethnic Studies office door of a Woodland Community College Faculty member. She said,  “The flyer stated, ‘March is stop blaming white people month. Take responsibility for your own actions. Hug a white person,’ with the image of a troll.”

“I was scared, offended, and understood the message as a personal attack aimed at me as a woman of color faculty, and also of the Ethnic Studies cultural programming,” she explained.

Following protocol and procedure, she reported the incident to the campus police and administration on the same date. However, “Campus police told me that there was nothing that could be done, because it was not a hate crime.”

What concerned her most was, “I researched the message and it frightened me even more because I found it displayed on a White nationalist supremacist webpage. I pointed this out to the administration.”

She told the Vanguard, “I believe that the Administration and Human Resources have not responded appropriately, did not make enough efforts to ensure my safety and safety of those around me.” 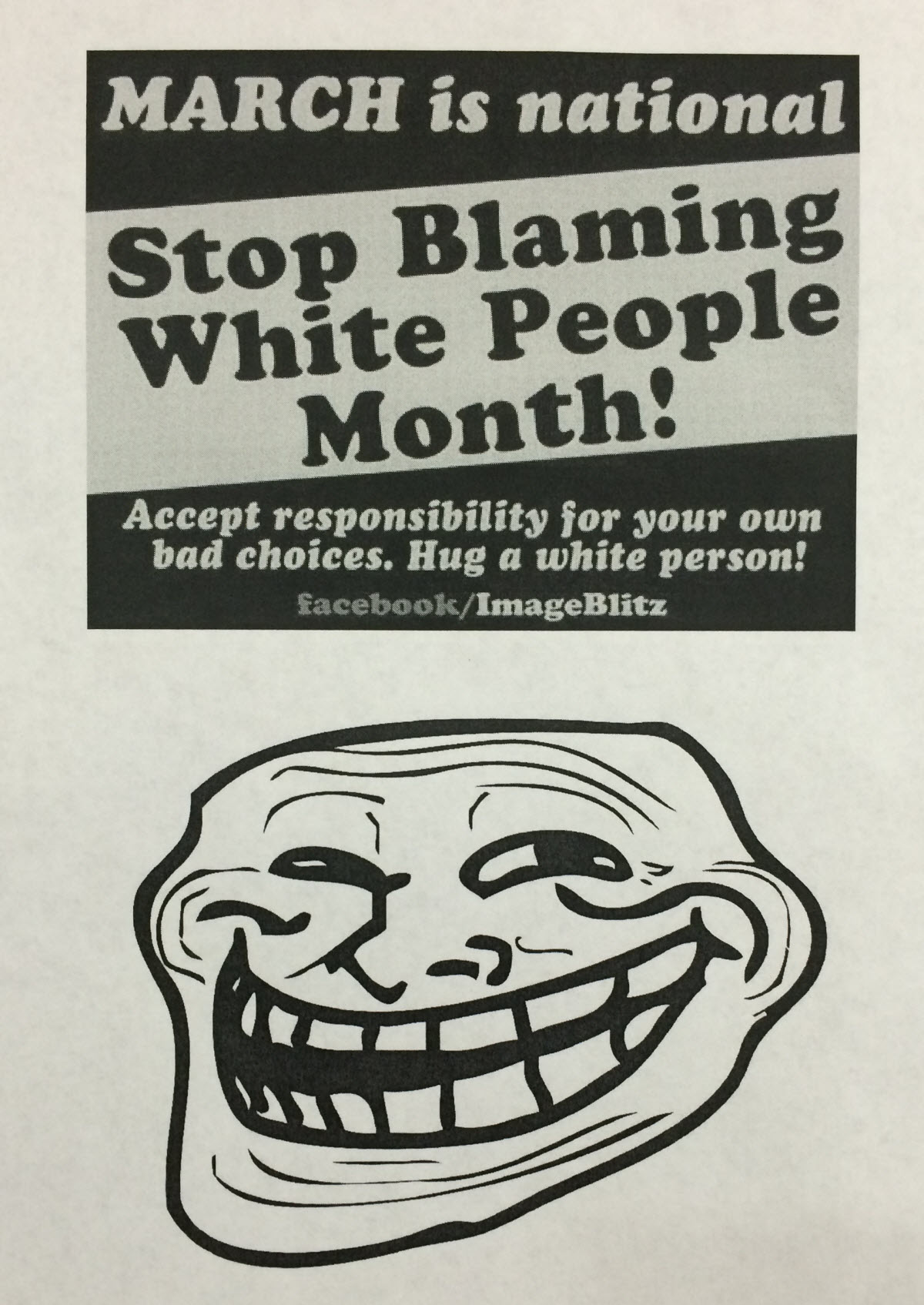 Below is the full and unredacted statement:

It is critical to report to the community issues concerning Chicana full-time instructional faculty regarding safety and campus investigation practices at Woodland Community College.

Faculty safety and campus investigation policies and procedures concern me as a faculty that serves students and community because on March 11, 2015 I experienced a second anonymous act of racial intimidation on the campus. I am the only Chicana full-time instructional faculty at this designated Hispanic Serving Institution. I have dedicated myself to the professional development, planning, assessment, and improvement of the Ethnic Studies program and also to campus cultural programming (which is part of my job description). The first incident was in 2009. I believe that the Administration and Human Resources have not responded appropriately, did not make enough efforts to ensure my safety and safety of those around me.

On March 11, 2015, a flyer was placed under my Ethnic Studies office door. The flyer stated “March is stop blaming white people month. Take responsibility for your own actions. Hug a white person,” with the image of a troll. I was scared, offended, and understood the message as a personal attack aimed at me as a woman of color faculty, and also the Ethnic Studies cultural programming. I followed procedure and reported the incident to the campus police and administration on the same date. Campus police told me that there was nothing that could be done, because it was not a hate crime. I reported it to the Diversity Committee and Safety Committee leaders too. I researched the message and it frightened me even more because I found it displayed on a White nationalist supremacist webpage. I pointed this out to the administration.

The next day I received a personal email from the President indicating that the situation was “unfortunate” and characterized it as a case of “ignorance.” In response to the President’s email I approached administration to express my concern for personal safety and to say that the response did not affirm the College’s commitment to safety, diversity, or a work space free of fear and intimidation for me and everyone on campus. I asked that a campus wide community alert be emailed immediately about the incident, campus’ diversity commitment, and to inquire if anyone had any information about the incident. I was told that administration could not do that because it needed to proceed with caution. The administration offered to have my office moved, but I do not think that there is a safer location on campus.

After a week, Human Resources Director Whitfield contacted me wanting to meet to find out the “nature” of the incident. Coincidentally, shortly thereafter, the President sent a statement to our campus indicating that some “abhorred activities” had energized student leadership and that there was a commitment to diversity. The President’s message seemed vague, even after I had requested that a message be sent to the campus about the specific incident. Many students, and even some faculty, did not understand the message because it was decontextulized. I followed up with an email to full time faculty, but I received little response. Since then I believe there has been minimal awareness of this racial intimidation.

Director Whitfield called for a first meeting to discuss the matter and “address and resolve the situation.” Given that the Union did not provide adequate support when I experienced the first bias incident in 2009, and that Director Whitfield did not provide adequate support in a prior investigation, I invited a third party to attend this meeting. The meeting mostly centered on what I felt was needed for safety and support. Director Whitfield asked me to tell him about both the 2009 and the recent incident. For safety and support I asked for regular security checks around my office area, cameras at the entrance and back of building 800, administration or district sponsor a workshop or forum on the subject of white privilege for awareness, and an amended police report to reflect fully reflect the character of the incident. I also pointed out that the police report indicated that the case was closed. He said that the college and district would consider these needs for safety and awareness.

I did not file a complaint because there was no one to file it against, even though others have been led to believe that I have done so. A month later, Director Whitfield and the President called for a second “follow up meeting” with me. I asked in an email what it was regarding, but did not receive a reply. I came to believe that it was to follow up on my requests and the topic of sabbatical that the President wanted to discuss for months. I did not bring a third party witness to this meeting. Director Whitfield did not allow me to record the meeting, which I found to be unhelpful and intimidating. He discussed how none of what I had requested was possible for one reason or another. When I asked why security officers were not making rounds by my office, I was told that they were but I was not seeing them. Whitfield also said that there was an undetermined date for cameras, for safety throughout the district. When I asked if a workshop or forum on white privilege would be sponsored by administration or the district, he said that, “the college nor the district will focus on such a specific issue, rather we will focus on global diversity.” Whitfield said that he worked with Yuba College on their diversity programming, and said “perhaps Yuba College needs something like this, but not this college because it is more progressive.” I informed him that an event on white privilege had been organized by Yuba College colleagues last year. He said that the Diversity Committee could organize something like this, but it would not be called for by administration. I said to Director Whitfield that perhaps if the charge came from the top leaders it might be more likely to happen. I said to the President, “You know, I and many others were impressed by your job talk because you had made reference to white privilege in it, and I thought that you would understand why we would need such a workshop or forum on our campus.”

At this second meeting, to my surprise Director Whitfield informed me that an unlawful complaint of discrimination had been filed on my behalf by administration, based on my “nationality.” This was the first time I had heard of this; I was troubled by it and requested a copy of the complaint. He said he would send it. Later, his assistant sent me an email “acknowledging” that a complaint had just been received. Later that day she sent me a message with a link saying that I “had requested” the link to file an unlawful complaint of discrimination. A response was sent immediately to clarify that I did not file or wish to file a complaint against anyone. Later an investigator contacted me twice to schedule an interview, when I was out sick. The focus on a purported complaint has now shifted the spotlight off of the hateful incident itself.

On March 27, Director Whitfield sent me a communication falsely stating that he had discussed with me that there were “two investigations,” and that I had already given “initial” statements:

I write to reiterate that this issue has not been addressed, and that complaint processes and procedures involving campus investigations have been mishandled, and need to be seriously reviewed. The insensitivity and mishandling of this recent incident by the Administration and Human Resources is unethical and insincere, and it caused great confusion among staff, students, and faculty; it has further negatively impacted me and the campus climate. Students were afraid and intimidated. I know this because recently I heard first hand that a staff member had been saying that an investigator was on campus because I had organized students for a rally. This is a false perception that has further injured me. Such rumors are unprofessional and further normalize the unsupportive attitudes and practices towards Ethnic Studies faculty and cultural programming. The kind of response from the administration regarding this incident has further shown the lack of safety and support for Ethnic Studies faculty, and program. This incident and the inappropriate response by administration have been distracting, made me feel unsafe on campus, increased my stress and anxiety, and ability to fully concentrate on students. I am doing my best to focus on completing this semester – serving students in class and cultural programming.

I ask be aware of incidents on our campus and safety. I request a call for promoting the general welfare of Chicana full-time instructional faculty and that existing policies and procedures regarding safety and investigations be reviewed. To my knowledge, the Diversity Committee and the Safety Committee have not even discussed this incident or responded, even though I made them aware of it the week it occurred. The College Council and Academic Senate have been notified as well. I suggest the appointment of a “bias incident response team.” Given the state and national climate on racial tensions, that is also on the mind of our students, I ask that we also call for supporting diversity programming in order to raise awareness and perhaps even prevent or learn how to renounce such incidents in the future. I hope to collaborate with others to continue serving our students and promote the goals of the Ethnic Studies Program and cultural programming at my designated Hispanic Serving Institution, without racial intimidations. I am deeply grateful for your leadership and voice. I ask that you send a letter of concern to the WCC President Michael White, before May 15 (graduation date). I thank you for your honest consideration.