Members of the city council were thankful that the for the first time in 13 years there is no cut list. But while revenues grew faster than expected last year, the reason that the city is in the black is not due to the improved economy but rather the temporary tax increase.

At the last council meeting, several council members asked the city to present a graphic that showed the true impact of the drop off of Measure O funds past 2020-21. Those figures were presented at the Finance & Budget Commission Meeting last night.

More importantly, there are talks of a COLA (cost-of-living adjustment) and the city prepared a chart that shows what a one percent per year COLA throughout the period would lead to, compared to no COLAs. The original city chart, showing the city in the black, had no increased employee compensation and did not show the impact of what happens when the sales tax goes away.

What becomes clear is that when the tax increase falls off the rolls after the 2020-21 year, the city revenue drops by $4.5 million. The city goes from being in the black in 2020-21 by nearly $2 million to being in the red in 2021-22 by about $3.4 million. And while revenues continue to increase modestly throughout the period, expenditures increase as well. 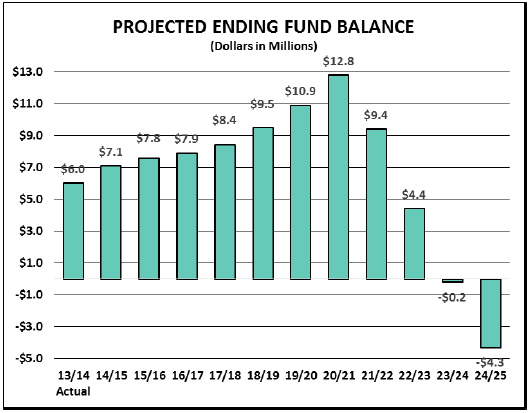 The result is that the fund balance, which is projected to be as high as $12.8 million or 24% as late as 2020-21, is in the negative just three years later if there is no extension of the city’s tax or otherwise an influx in revenue – either through economic development or unexpected revenue sources.

But even this might represent a rosy picture. That model still assumes no increase in employee compensation as the result of two MOUs. How realistic is that? At the same time, even a very modest compensation increase in the form of a one percent COLA has a very dramatic impact on the budget.

The chart shows what happens with a one percent COLA and projects it out past when the tax increase will drop off the tax rolls.

The first thing we see is that a one percent COLA will basically track with expected revenue increases across the board. So the city’s projection of being in the black will no longer hold. The city will fluctuate between slight deficits and slight surpluses. By 2020-21, the city will be in the black by $300,000 under this scenario.

When 2021-22 hits, and the tax increase disappears the city will immediately find itself right back in the $5 million deficit it was in previously. By 2024-25, the city would be back in a $7 million deficit. 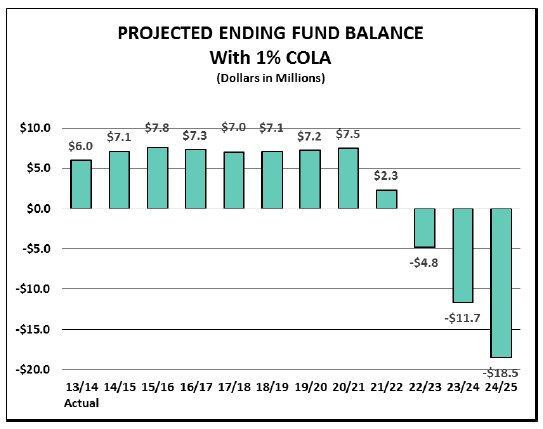 The city concludes, “The forecast has been extended out beyond the expiration of Measure O so that the effect of its sunset can be seen in relation to anticipated expenses in FY20/21. It is evident from this projection that, absent new revenue sources or expenditure reductions, the City will have expenses far in excess of revenues.”

Dan Carson believes that the city budget has understated the likely property and sales tax revenues. He wrote, “If city revenues from these two important tax sources grew instead more in line with actual city historical trends, new statewide projections by the Department of Finance and the Legislative Analyst’s Office, and as suggested by other relevant data (like the 38 percent increase in resale permits), the city could realize annual growth in property tax revenues in the range of 5 percent annually, and sales tax growth in the range of 4 to 5 percent annually, over the next five years.”

Mr. Carson believes, “If these alternative revenue projections proved correct, the city General Fund could realize $750,000 in combined additional revenues in 2015-16 from these two tax sources. By 2020‐21, the final year of the five-year projection period, the compounded effect of better revenue growth could be as much as $4 million more annually than is now being estimated if positive economic trends continue.”

The city adds, “If City assumptions, which are admittedly more conservative, prove to be below actual revenue collected, the additional revenue could be used to accelerate the City’s plans to deal with the unfunded liabilities and infrastructure improvement backlogs.”

Given that, it seems reasonable for the city to assume a more conservative growth model.

There are several important points that should be made here. First, even a one percent COLA changes the city’s budget forecast drastically. Last decade, the city council approved MOUs that included a 36 percent increase over four years for fire, and 12 to 18 percent increases for other bargaining units.

As it stands now, the city would be unwise to implement a one percent annual COLA.

Moreover, it becomes clear that, absent new revenues or cuts, the city will have little choice but to attempt to extend the sales tax at one percent before 2020-21.

Given the projections about innovation parks – even if they come to fruition, the city might be wise to look toward additional cuts in the next MOU round. However, comments by some public officials have made that exceedingly unlikely.