Back in February, the Davis City Council unanimously supported Plan D, created by the city as a compromise on Paso Fino. They did so despite a warning from the applicant that the plan was unworkable.

“The city’s Plan D you cannot build one house on any of those lots,” Dave Taormino, one of the applicants, told council following public comment. “Yes it’s very pretty, but no one measured the driveways, no one took into consideration the 40 foot worth of easements on the western side. So while it’s pretty, it’s not buildable.”

Councilmember Lucas Frerichs made the motion to support the staff recommendation, seconded by Mayor Dan Wolk.

Staff had argued that, while they appreciate the efforts of the applicant to respond to concerns about trees and preservation of greenbelts, the latest proposal “does not go far enough to address the concerns raised.”

So here we are back to the drawing board with Plan E that has three options. Staff says it recommends Option #1, “because it substantially reflects the February 3, 2015, City Council direction regarding approvable plan.”

According to staff, this option, which is similar to Options #2 and #3, “proposes to change approximately 0.43-acre of the existing 0.75-acre Neighborhood Greenbelt parcel to Residential Low Density land use designation. This is intended to facilitate the proposed six-lot residential subdivision while retaining the Canary Island Pine trees.”

However, staff notes, “Alternative Plan E Options #2 and #3 do not reflect the two main components of conceptual Alternative Plan D, which are 1) reduction of the number of units from eight to six and 2) retention of the Canary Island Pine trees within public owned land as envisioned in the 2009 approval.”

The land transaction is a separate city council action, and would be taken up by the council on a later date, should this proposal be approved.

The council in a separate item is asked to declare the Canary Island Pines, located at 2627 E. Covell Boulevard, as Landmark Trees per the Tree Commission’s recommendation from the April 16, 2015, Tree Commission meeting.

Council last month opted to delay the decision on this item until they decide what to do about Paso Fino, though they did temporarily impose the order to protect the trees. The application was submitted by residents concerned about the trees, and would make the nine Canary Island Pines Landmark Trees, due to concerns of the area residents about the loss of canopy and potential wildlife habitat trees.

Staff notes, “The trees could meet the criteria for Landmark Trees as they are a significant grove of trees within the area.” They note, “As part of the Paso Fino project, any approved plans or proposed design alterations will include staff recommendations for the treatment of the trees during the project. This will include a tree protection plan, tree maintenance during the construction process, and any tree inspections and pruning prior to City acceptance, if the trees are placed under the City’s jurisdiction.”

This would presumably allay fears of attempts to cut down the trees as a way to help resolve the Paso Fino development.

On the larger project, staff opines that “Alternative Plan E Option #1 best reflects the February 3, 2015, City Council direction to the applicant to return with a plan with similar components as conceptual Alternative Plan D” and focuses its staff report on that option. The other two options, according staff, do not deserve “significant review” because they “fail to meet the minimum requirements of Council direction on February 3, 2015.” 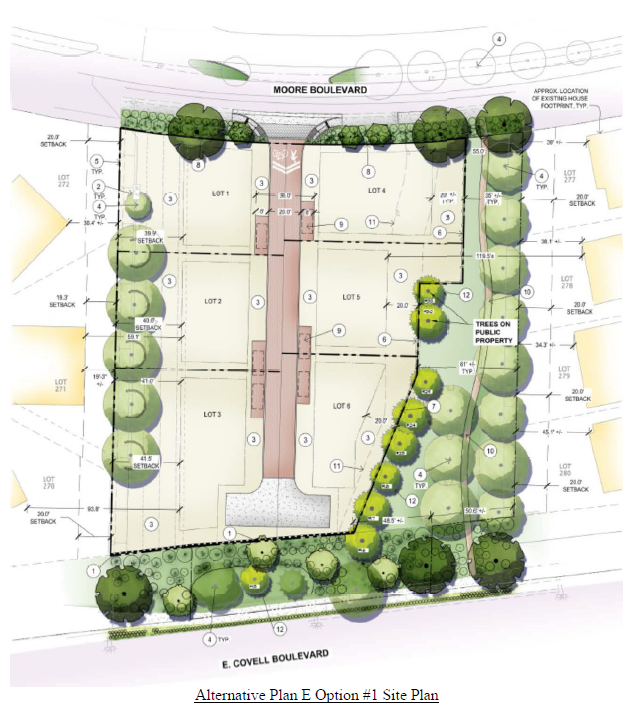 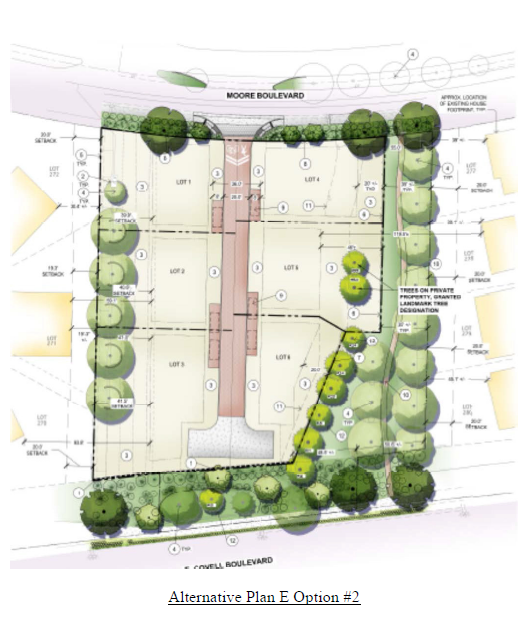 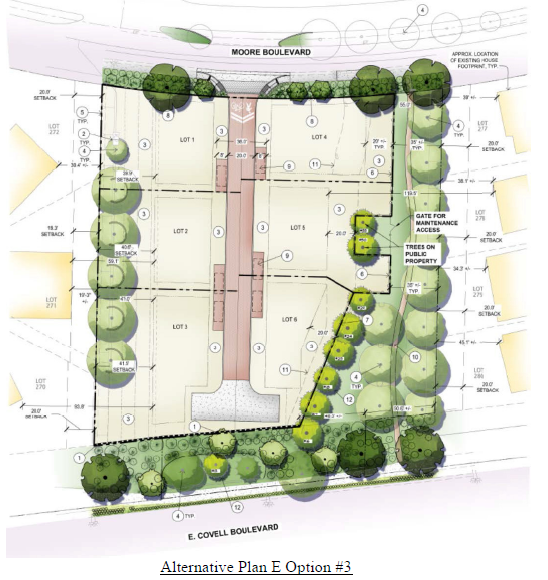 The issue of the greenbelt and the potential for the city to swap the greenbelt has been at the center of the policy dispute from the start.

He said our first decision is, “We have land designated as a greenbelt, what is our policy for selling that?” He suggested we make a determination based not only on this parcel but also in general terms. “I’m not really comfortable with this idea that we’re selling or swapping a greenbelt, that’s my sticking point,” he added.

On the other hand, other councilmembers seemed less concerned about this specific issue. “I’m really not worried about this becoming a precedent,” Mayor Pro Tem Robb Davis stated. “This is clearly a unique thing in our city.” He added, “You said it in your staff report, the city does not sell greenbelts.”

“We can acknowledge that this is a unique situation. It was a buffer designed for a very specific purpose, at a very specific point in time and that time has passed and we’re going to do something a little bit different, it’s out of the ordinary, it’s unique,” he said.

Rochelle Swanson added, “This isn’t something that’s going to set precedent.” She said there is no comment on record that would suggest “that this council or anyone is in the business of selling greenbelts.”

City staff does not really address Brett Lee’s concerns – nor the concerns of the neighbors or general public on this issue.

They note that the disposition of the City Neighborhood Greenbelt parcel “is not part of this project review and discussion.”

They add, “It is a policy issue to be weighed by the current City Council. If the project is approved, it would be subject to completion of an agreement for transfer of land or land swap at the discretion of the City Council at a later date.”

Staff quotes from the 2009 approval: “(The) greenbelt buffer around the Haussler property was dedicated to the City as part of the Wildhorse development to provide a buffer between the existing Haussler home and the new Wildhorse homes for the benefit of the Hausslers. The land was not needed for greenbelt purposes, but did provide a location for underground utilities on the west and access/maintenance of the private driveway to the old home.”

They now write, “While not a ‘traditional’ linear greenbelt, the U shaped City owned property does serve as a buffer between properties and does provide for bicycle and pedestrian connectivity between Moore Boulevard and Covell Boulevard.”

The question is will this be enough to satisfy the council and the neighbors?

28 thoughts on “Did Applicant Submit Proposal on Paso Fino That Council and Neighbors Can Accept?”