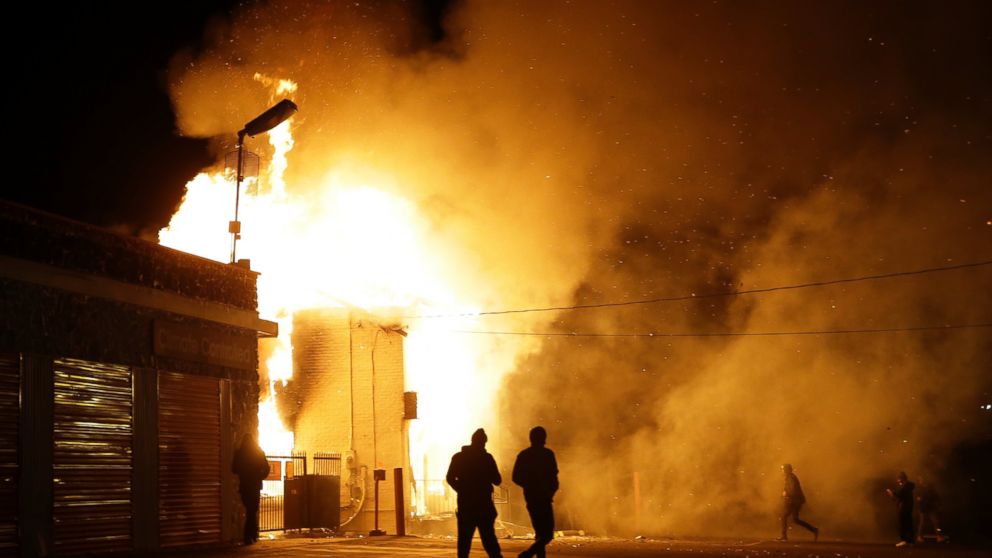 Washington Post Columnist Radley Balko disputes claims that “we are in the throes of a new nationwide crime wave” due to the “chorus of police reform advocates and critics of police brutality since the Ferguson protest last summer.” Critics like Heather Mac Donald claim that protests and criticisms in the wake of Ferguson, and other incidents more recently like the death of Walter Scott in South Carolina and Freddie Gray in Baltimore, have caused cops “to become disillusioned, cynical, and afraid to do their jobs.”

Mr. Balko writes, “Mac Donald’s piece itself was incredibly cynical. It tied into a growing backlash against police reform from law enforcement groups, police unions, and the law-and-order crowd, and has circulated widely among those groups. Implicit in her argument is the idea that the average police officer is incapable of doing his job properly if other police officers are getting criticized, rebuked, or held accountable for misconduct.”

Mr. Balko continues, “It also ignored a lot of the larger issues to come out of Ferguson and Baltimore, issues that went well beyond the behavior and performance of individual cops, such as the way St. Louis County municipalities soak their residents to fund the county’s astonishingly large population of local fiefdoms, or Baltimore’s troubled racial history, or the city’s 2000s policy of mass arrests as a means of social control and the damage done by giving poor people an arrest record when they’ve committed no crime.”

However, the New York Daily News disputes the account by Ms. Mac Donald. Franklin Zimring writes, “Mac Donald’s recital of frightening statistics plays special attention to the problems in New York City and Los Angeles, America’s two largest cities and most prominent urban success stories in crime reduction in the past two decades. Bill Bratton, now in his second stint in New York, has served as commissioner of both departments.

“We are told shootings are up in both Los Angeles and New York, and that ‘the most plausible explanation of the current surge in lawlessness is the intense agitation against American police departments over the past nine months,’” he notes.

However, Mr. Zimring concludes, “Is there a nationwide crime wave? On current evidence, probably not, and a careful analysis of official statistics in New York and Los Angeles provides reason for reassurance rather than alarm.”

For instance, in New York, “The most recent official crime statistics indicate that so far in 2015, the city has experienced significant declines from 2014’s ultra-low levels in burglary, robbery and larceny. At the same time, total homicides for the first five months of the year at 135 are higher than in 2014 — but quite close to the pace of 2013 and around 30% lower than in 2010.”

However, even with that, at the current rate, “killings in New York City would end 2015 as either the third or fourth lowest year in the city’s modern history.”

Mr. Balko argues, instead, “Crime stats can’t just keep falling forever. And in places like New York, crime rates have reached astonishing depths. Inching back upward — to levels that would be historic lows just a few years ago — isn’t indicative of a coming national crime wave. It may just be statistical noise, or a leveling off.”

As Mr. Zimring notes, crime rates for other crimes continue to fall. So, he writes that if the so-called Ferguson Effect “has indeed increased the New York homicide total, should it also get credit for the 223 fewer robberies so far in 2015 when compared to the previous year? How about the 974 fewer burglaries in five months?”

Furthermore, in Los Angeles, homicides are actually down in 2015 – despite not only the turmoil nationwide, but also local changes in the laws.

Mr. Balko takes issue with Ms. Mac Donald’s argument that there has been a surge in violence against cops. She writes that the killings of citizens “have led to riots, violent protests and attacks on the police.” She then adds, “Murders of officers jumped 89% in 2014, to 51 from 27.”

But as Mr. Balko points out that, while the murder of officers did climb in 2014, it came after a historic low in 2013. Moreover, many of the officer killings in 2014 predated the Ferguson incident – “of the 51 murders of police officers last year, just 19 occurred after the death of Michael Brown on August 9th.”

Even with the increases in 2014, “it’s still the sixth safest year for cops since the 1950s, and below the average over the last 10 years, a period in which the number each year trended downward. If you look at the rate of murder of cops, the relative safety of cops today is even more impressive.”

Ms. Mac Donald, according to Mr. Balko, “is also sly with her cutoff points. She cites the increase in homicides of cops from 2014 over 2013 to support her contention that the reaction to the deaths of Brown, Garner, and Gray are driving violence against police. But while there were a couple smaller protests in July shortly after Garner was killed, the protests didn’t really heat up until December, after a grand jury declined to indict the cop that killed him. It was during the December protests that police and law-and-order pundits began to complain about the anti-police rhetoric. It’s hard to blame protests held in December 2014 for an increase in killings of police that took place over the course of the entire year. Mac Donald also mentions the Freddie Gray protests. But Gray was killed this year, not last year. It’s misleading to cite either of these cases for an increase in police fatalities in 2014.”

Moving to the issue of Baltimore. Mr. Balko acknowledges, “It is true that we’re seeing an awful surge in murders in St. Louis and Baltimore right now. Mac Donald blames this on police reform activists by claiming their rhetoric both emboldens criminals and makes cops either afraid or unwilling to do their jobs.”

Implicit in this argument is that it “seems to be that people should just keep quiet in the face of what they perceive to be brutality and injustice, lest it embolden violence against the police.” Mr. Balko argues that “the protests in St. Louis were about much, much more than Michael Brown. That’s true in Baltimore too, but there the instigating incident also appears to have been much more egregious and unjustifiable than the one in St. Louis.”

The argument, he says, appears to be: “Either live with harassment and abuse from the police, or live in fear of crime.” He argues, “[S]urely we can do better than that.

“The second point is more alarming,” Mr. Balko argues. “If police in Baltimore and St. Louis are letting protesters and critics make them too afraid or spiteful to do their jobs, essentially turning their backs to allow people to be robbed and killed, that isn’t a problem with protester or social justice culture, it’s a  problem with police culture.”

He writes, “One would hope that a conscientious cop would be encouraged by the indictment of a bunch of cops for giving allegedly giving a man an illegal, extra-judicial punishment that resulted in his death. Getting bad cops, law-breaking cops off the street is after all a boon to law and order, not to mention to the reputation of cops who do it right. Instead, we’re told by law enforcement groups and their advocates that your average, well-intentioned cop is so outraged by these indictments that he’s refusing to do his job. Or, more ridiculous still, that even the good cops are hesitating to protect people out of some fear that they’ll be publicly criticized by racial justice groups. For a profession that takes such pride in its bravery, police advocates make cops seem remarkably thin-skinned.

“So what is causing the surge of murders in Baltimore and St. Louis?”

Mr. Balko writes, “Perhaps Mac Donald is right that in those cities in particular, anger against police brutality is spilling over into violence. I haven’t seen convincing evidence to prove or disprove the point.”

He offers another possibility, “In the meticulously researched book American Homicide, historian and sociologist Randolph Roth argues that historically, that two of the factors that cause homicides to soar in American cities are a sense of a loss of government legitimacy, and a loss of a feeling of belonging among outcast or historically oppressed groups. That would certainly seem to be the case in both St. Louis and Baltimore. These are difficult things to quantify, but so is Mac Donald’s insinuation that criticizing cops for alleged brutality makes people want to murder them.”

He continues, “Ultimately, arguments like Mac Donald’s are aimed at exploiting fear of crime to shame people who dare to speak up about police abuse — or at least to shunt them to the fringe of the public discourse. But as Zimring points out, stoking up fears about crime based on questionable data has in the past had some devastating consequences.”

Mr. Zimring writes, “One historical footnote to last week’s crime wave prediction may put Mac Donald’s alarmism in perspective: The same Manhattan Institute that employs her also published a warning by John Dilulio in 1996 that the United States would produce approximately 270,000 more juvenile super-predators by 2010. It’s title: ‘How to stop the coming crime wave.’”

However, “That famously predicted crime wave never happened. But last week’s revival of dire predictions suggests that the Manhattan Institute has a long-standing tendency to view crime trends with alarm for political effect.”

Mr. Balko adds, “Not only did that crime wave never happen, but the U.S. entered into its longest sustained drop in violent crime on record. (Dilulio has since admitted that he was mistaken.) The ‘super predator’ panic unleashed a number of draconian sentencing laws that put young kids away for long sentences by treating them as adults in the court system. It did irreparable harm to a generation of mostly black, low-income communities.

A final point to highlight is Mr. Balko’s point that Ms. Mac Donald’s “argument also relies on the assumption that successful crime control is only achieved through ‘broken windows’ policing, dehumanizing policies like stop-and-frisk, and giving cops wide latitude when it comes to using force.”

He notes, “There are enough studies out there on these policies to find impressive-sounding support for whatever position you want to take on them.”

However, “But in a free society, we should want the police to employ the least amount of force to achieve the best possible results. Or to put it another way, if we see similar drops in crime with aggressive policing that we see with more community-oriented policing, we should opt for the less aggressive, more community-oriented methods. And in places like Richmond, Virginia; Nashville, Tennessee; and Dallas, Texas.”

31 thoughts on “Is There a New Crime Wave? Columnist Says No”