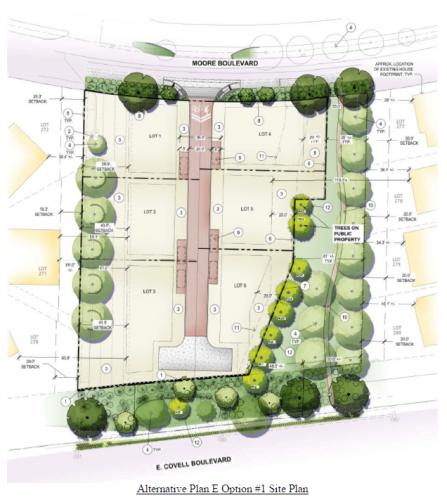 There is probably plenty of blame to go around on the Paso Fino Project, but in our view there has been entirely too much city and community time and resources spent on what was at most a 12-unit project with eight houses and four granny flats, which is now down to six units.

From the perspective of the neighbors and some community members, the idea of the city swapping or selling a greenbelt seemed like a bad idea from the start. Unusual or typical, using city assets for private development is an issue that has resonated with the population.

A secondary issue has been that of the non-native Canary Island Pines, where the city may go so far as designating them as landmark trees.

While some have portrayed the developers as bad guys in this scenario, they have certainly stuck this process out. Clearly, they have been frustrated at times. For instance, in February, the Davis City Council unanimously supported Plan D, created by the city as a compromise on Paso Fino. They did so despite a warning from the applicant that the plan was unworkable.

“The city’s Plan D you cannot build one house on any of those lots,” Dave Taormino, one of the applicants, told council following public comment. “Yes it’s very pretty, but no one measured the driveways, no one took into consideration the 40 foot worth of easements on the western side. So while it’s pretty, it’s not buildable.”

As staff noted at the time back in February, they appreciate the efforts of the applicant to respond to concerns about trees and preservation of greenbelts, but the latest proposal “does not go far enough to address the concerns raised.”

So here we are again, now four months later and for the first time it looks like we could have an agreement. The developers submitted three alternative Plan E’s. Staff says it recommends Option #1, “because it substantially reflects the February 3, 2015, City Council direction regarding approvable plan.”

According to staff, this option, which is similar to Options #2 and #3, “proposes to change approximately 0.43-acre of the existing 0.75-acre Neighborhood Greenbelt parcel to Residential Low Density land use designation. This is intended to facilitate the proposed six-lot residential subdivision while retaining the Canary Island Pine trees.”

However, staff notes, “Alternative Plan E Options #2 and #3 do not reflect the two main components of conceptual Alternative Plan D, which are 1) reduction of the number of units from eight to six and 2) retention of the Canary Island Pine trees within public owned land as envisioned in the 2009 approval.”

The issue of the greenbelt and the potential for the city to swap the greenbelt has been at the center of the policy dispute from the start.

He said our first decision is, “We have land designated as a greenbelt, what is our policy for selling that?” He suggested we make a determination based not only on this parcel, but also in general terms. “I’m not really comfortable with this idea that we’re selling or swapping a greenbelt, that’s my sticking point,” he added.

On the other hand, other councilmembers seemed less concerned about this specific issue. “I’m really not worried about this becoming a precedent,” Mayor Pro Tem Robb Davis stated. “This is clearly a unique thing in our city.” He added, “You said it in your staff report, the city does not sell greenbelts.”

“We can acknowledge that this is a unique situation. It was a buffer designed for a very specific purpose, at a very specific point in time and that time has passed and we’re going to do something a little bit different, it’s out of the ordinary, it’s unique,” he said.

Rochelle Swanson added, “This isn’t something that’s going to set precedent.” She said there is no comment on record that would suggest “that this council or anyone is in the business of selling greenbelts.”

We have not heard from the residents on this alternative yet – though on the surface it would appear to satisfy their concerns. We hope that this puts to rest the issue of Paso Fino.

In the future, we would hope the city could forge out more specific guidelines of the use of city land for private development, the role of trees, and the true goals of infill development.

As the city looks inward for new development, it has pushed for greater density. We already see neighbors raising objections to density in the Sterling Apartments. Right now the city seems to be adjudicating these kinds of disputes on a case-by-case basis, which is not only inefficient but produces inconsistent policies.

More consistency would help to establish rules for developers and expectations for neighbors and might make the process go smoother in the long run.