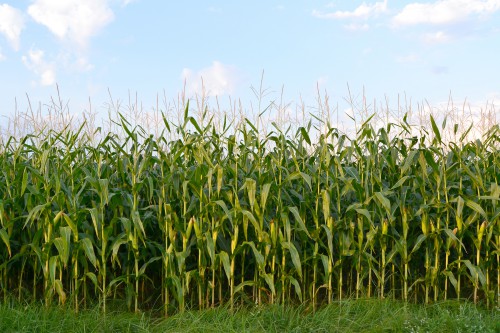 Yvette d’Entremont, also known as SciBabe, opened the symposium with a talk on effective science writing. d’Entremont is a chemist and science blogger known for her scathing criticism of Vani Hari, a food activist also know as Food Babe.

d’Entremont said that the science news cycle often involves media outlets summarizing and interpreting each other’s reports, so that the actual research being reported ends up “muddied.” She noted that when readers search the web for “GMO,” the first page results contain mostly sites that misinform. Many readers accept the information on these sites without questioning. “The public has not necessarily been trained to be skeptical,” d’Entremont said. To better connect with audiences, she suggested that science writers be accessible, engaging, and use humor.

Pamela Ronald, Ph.D. , Professor of Plant Pathology and IFAL Faculty Director, gave her recent TED talk. Ronald is a geneticist who studies the role that genes play in a plant’s response to its environment. She and husband Raoul Adamchak, Market Garden Coordinator at the UC Davis Student Farm, co-authored Tomorrow’s Table: Organic Farming, Genetics, and the Future of Food.

Ronald explained that flood-tolerant GMO rice varieties bred by the International Rice Research Institute are now grown by 3.5 million small farmers in Asia. These farmers get three-times the yield of conventional rice varieties with no additional inputs. The basis for flood-tolerance is the rice gene “Sub1” that Ronald and her colleagues isolated.

Ronald then discussed “golden rice,” a variety engineered with B-carotene, a precursor of vitamin A. “Scientists predict that just one cup of golden rice per day will reduce blindness and the deaths of thousands of young children each year,” Ronald stated. “But golden rice has been virulently opposed by activists who are against genetic modification.” Health and safety studies on golden rice continue, and there is no anticipated release date.

Alison Van Eenennaam, Ph.D., Cooperative Extension Specialist in Animal Genomics and Biotechnology, described a GMO that can help meet the increasing global demand for fish. AquAdvantage® Salmon is an Atlantic salmon engineered with a growth hormone gene from Chinook salmon, which gives it the ability to reach market size with less feed and in half the time of conventional salmon.

“You can’t save wild fish by eating them,” said Van Eenennaam, who won the Borlaug Council for Agricultural Science and Technology Communication Award in 2014.

AquaBounty Technologies, which developed the salmon, has spent almost twenty years and millions of dollars working to gain regulatory approval from the FDA. Government approval may come this year, making the salmon the first GMO animal approved for human consumption in the US. However, several grocery chains have announced that they will not sell the GMO salmon, which some critics have dubbed the “Frankenfish.”

Kevin Folta, Ph.D., Professor of Horticultural Sciences at the University of Florida, described GMOs that may never be commercialized because of regulatory burdens and/or concerns about consumer acceptance. These include reduced-allergy peanuts, citrus greening disease resistant citrus, virus-resistant cassava, and Bt eggplant.

“These technologies can become available if we have the courage to support them,” Folta stated. “We just need to help people get over ‘Monsantophobia.’”

Folta blogs about agricultural genetics and GMOs at kfolta.blogspot.com and just appeared on the Joe Rogan Experience.

He noted that he does not grow GMO corn, only because “end users don’t want it.” Muller earns a $3 premium per bushel for non-GMO corn.

IFAL is a unit of the UC Davis World Food Center. Its mission is to be “the world’s premier resource for science-based information on food and agriculture” for consumers, journalists, policy makers and the general public.

Share:
Tags:Food IssuesGMOInstitute for Food and Agricultural LiteracyLeanna SwehaUC Davis
Previous : Attempted Murder Trial in Yolo County
Next : The True Effects of Raising the Minimum Wage Locally on the Most Vulnerable Citizens

13 thoughts on “Researchers, Farmers and Journalists at UC Davis Symposium ask: Why such “Distaste” for GMOs?”