Defenders of the police have launched a counter-offensive, arguing that more whites are killed by police each year than blacks. That focuses the debate on the critical question as to whether we should look at the black’s percentage of the population or proportion of the violent crime.

However, a new investigation by the Guardian turns this debate on its head. Their findings are, “Black Americans are more than twice as likely to be unarmed when killed during encounters with police as white people.” 102 of 464 people killed so far this year in incidents with law enforcement officers were not carrying weapons.

They analyzed public records and local news reports to learn that, of the 464 people killed so far by police, “32% of black people killed by police in 2015 were unarmed, as were 25% of Hispanic and Latino people, compared with 15% of white people killed.”

The five-month study also found that “local and state police and federal law enforcement agencies are killing people at twice the rate calculated by the US government’s official public record of police homicides.”

“The Guardian’s statistics include deaths after the police use of a Taser, deaths caused by police vehicles and deaths following altercations in police custody, as well as those killed when officers open fire. They reveal that 29% of those killed by police, or 135 people, were black. Sixty-seven, or 14%, were Hispanic/Latino, and 234, or 50%, were white. In total, 102 people who died during encounters with law enforcement in 2015 were unarmed.” 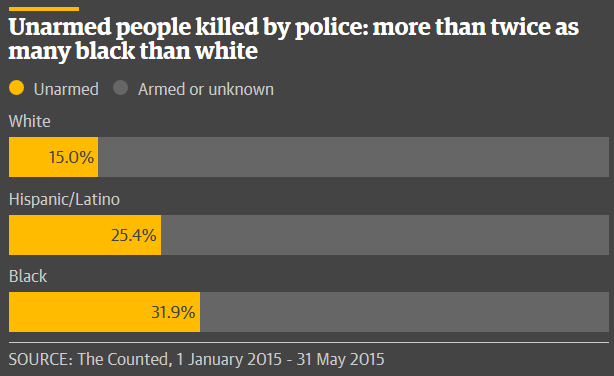 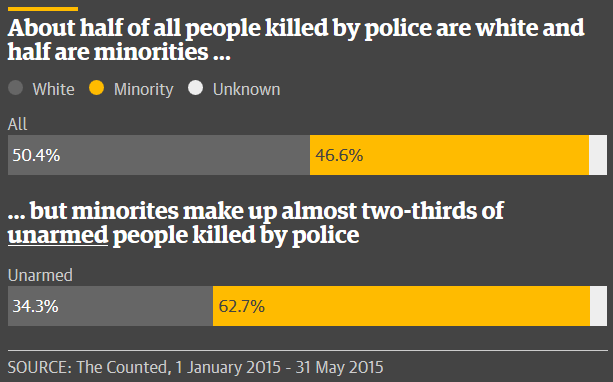 The Guardian’s figure of 464 people killed trumps the report by the Washington Post over the weekend (Fatal police shootings in 2015 approaching 400 nationwide), which put the number at 385. The discrepancy highlights a critical problem that we have reported numerous times – there is no official count of those killed by police officers (whether those killings are justified, unjustified, or disputed). Nate Silver’s site has estimated the number annually at over 1000.

“It’s troubling that we have no official data from the federal government,” said Laurie Robinson, the co-chair of Barack Obama’s task force on 21st-century policing. “I think it’s very helpful, in light of that fact, to have this kind of research undertaken.”

But the Washington Post’s report dovetails on the critical finding by the Guardian: “About half the victims were white, half minority. But the demographics shifted sharply among the unarmed victims, two-thirds of whom were black or Hispanic. Overall, blacks were killed at three times the rate of whites or other minorities when adjusting by the population of the census tracts where the shootings occurred.”

The Post also attempts to shed light on the situations that led to fatal shootings – not surprisingly there is a strong mental illness component. They write: “About half of the time, police were responding to people seeking help with domestic disturbances and other complex social situations: A homeless person behaving erratically. A boyfriend threatening violence. A son trying to kill himself. Ninety-two victims — nearly a quarter of those killed — were identified by police or family members as mentally ill.”

They give an example, “In Miami Gardens, Fla., Catherine Daniels called 911 when she couldn’t persuade her son, Lavall Hall, a 25-year-old black man, to come in out of the cold early one morning in February. A diagnosed schizophrenic who stood 5-foot-4 and weighed barely 120 pounds, Hall was wearing boxer shorts and an undershirt and waving a broomstick when police arrived. They tried to stun him with a Taser gun and then shot him.”

The other half seemed more routine, as they involved “robberies, or the routine duties that occupy patrol officers, such as serving warrants.”

Mother Jones writes this morning (Here’s What 2 Big New Reports on Police Killings Tell Us), “The two reports confirm and build upon what previous attempts to collect and examine this data have already shown: Police killings happen much more frequently than the existing official data shows.”

Finally they add, “It’s also worth noting what these investigations don’t readily show. It’s unclear, for instance, in how many cases police officers were known to have a history of misconduct or a questionable record. How many cases were captured on video? Are there notable racial disparities among mentally ill suspects? To what extent do the Post‘s and the Guardian‘s probes reveal incidents that weren’t previously publicized?

“These questions still linger. Still, for anyone who has been keeping an eye on police killings, these reports are a valuable start toward filling the gaping holes in the data.”