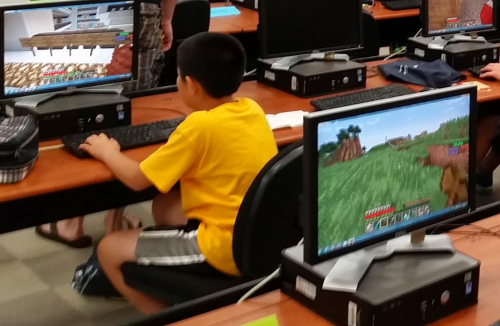 The goal of providing access to computer technology for teachers and students within school districts is more complex than it would at first appear. There are multiple strategies by which it may be provided. Some of these succeed, and others fail, in spite of the best intentions of their designers.

Comparing the experience of LA Unified and Davis Joint Unified school districts, we can see some lessons which have been learned.

In L.A. the plan was to give each child an iPad with a ready, interactive, and embedded curriculum.The intentions of LA educators and administrators were good. They wanted to provide their kids with a 21st century education, and to include every kid. Everyone loves Macs, and from the outside it seemed like a terrific plan. It was a bold strategy intended to upgrade the education for all the students in the 2nd largest school district in the country.

However, there developed multiple, interacting problems. The initial decision, as it turned out, was heavily influenced by Apple and Pearson executives. It was later claimed that the criteria for the systems to be purchased were designed to reflect the Apple computer and Pearson curriculum offerings, blocking other bidders. The lack of transparency and the possibility of rigged bidding eventually resulted in an SEC investigation, which is on going.

As well, the roll out of computer technology was plagued by a lack of clear leadership in charge, a lack of coordination with parallel infrastructure needs, such as WI-Fi, by a lack of teacher preparation, and finally by teacher opposition.

The expense of the iPads ($768) was magnified by an added built-in, and expensive curriculum by Pearson ($200), which was locked into the iPad, and not chosen by many teachers. The promised interactivity of the digital curricula was seen as disappointing, and not as promised. Refunds were demanded of Apple and of Pearson. Security rapidly became an issue when, within hours, students had hacked the school firewalls, using the Macs.

When one compares the experience of LA Unified, where iPads and embedded Pearson curriculum were chosen at a cost of over 1 billion dollars, and lately abandoned, we can appreciate the astute management of strategy and resources by the leadership here in Davis.

This is an effort in our schools which is going right, and which is allowing our teachers and students to progress rapidly. It should be applauded and supported.

DJUSD has so far sidestepped the problems experienced by LAUSD. In part, the relatively small size of our district has been an advantage.

In Davis, transparency, apparently, has not been an issue. Costs and other choices involving instructional technology have been communicated in public. For instance, a request to expand the system, including its cost, was just discussed in the latest open Board meeting, which was also televised.

The choices of technology to be purchased have been made with an eye toward security and toward economy as can be seen in the choice of Chromebooks as the computer of choice in the school system. This was and is a pivotal choice since the Chromebook is safe from malware installation, being essentially a browser. The economical, light Chromebooks can be stashed in organized carts which charge the computers, when not in use. The computer filled carts can be moved from room to room with ease, so they are easily shared.

For the same funds, approximately 2-3 Chromebooks can be purchased for one iPad, providing at least double the potential student and teacher computing access for the same money. These Chromebook carts are being rolled out, in a coordinated way, with sequential, advancing Wi-Fi installation throughout district schools.

Expensive, locked in curriculum, another problem, has been avoided for the moment. Instead, the district has implemented Google Apps for Education. It has also put a “Chromebook Academy” in place, filled with resources for teachers and students. The academy highlights links to free, recommended, educational websites to support their own in-person instruction, not to replace it.

The overall success of the program in Davis, thus far, is due to the insight and attention to detail that has been given to the project by the Director of Instructional Technology and Learning, Marcia Bernard, and her team. Thus far implementation of new infrastructure, computer and internet technology has been relatively well coordinated with student needs and with teachers’ concerns and workloads.

Considering how important this effort is and how well managed it has been, it makes sense that the Trustees are considering expanding the program. The plan would nearly establish a dedicated group of Chromebooks for each grade level at each elementary school. At the secondary schools, many carts and devices would be added. The added carts would also provide devices that could be checked out and used by students in the libraries.Funding this effort would be an excellent way to further advance the skills of both teachers and students at DJUSD, in concert. Easy internet access should remain among the top priorities for Davis schools, and merits the necessary funding.

Technology in schools has great potential for a positive impact on our children’s education. There are undeniable pitfalls, but with awareness and planning, we can avoid them.

What Schools Must Learn From LA’s iPad Debacle

Jessica Chabot (flora) is Director and cofounder of Davis Code Camp which provides classes and camps for children who are taught in person. We focus on children's developmental milestones and digital literacy in classes led by college age instructors.

18 thoughts on “Technology in Education: How Davis Avoided Common Pitfalls”