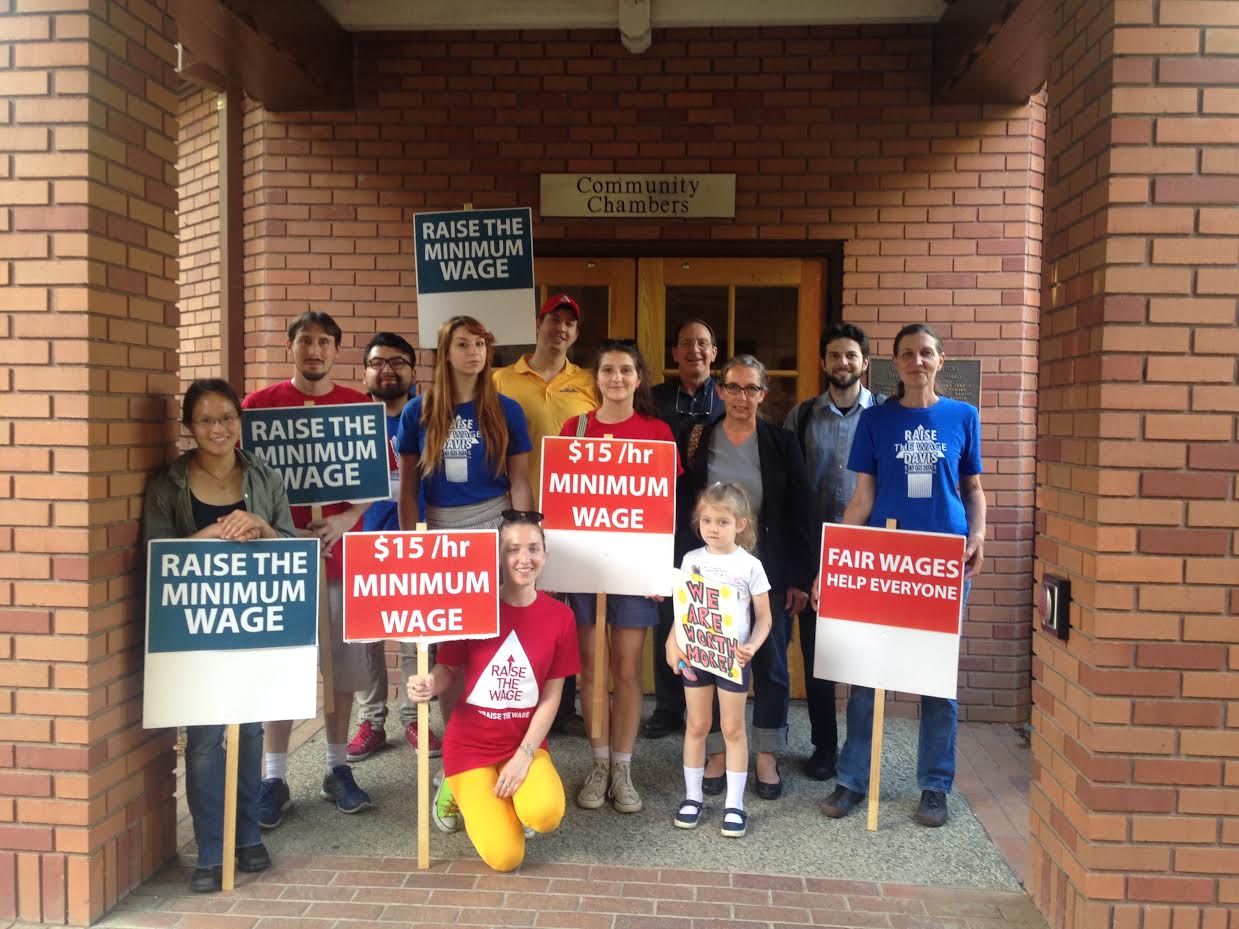 At last night’s City Council meeting a contingent of low wage workers, students, and union representatives spoke during Public Comments in support of a Living Minimum Wage in Davis. In addition to discussing their own financial plights, they asked the City Council to follow the leads of Seattle, San Francisco, and Los Angeles and implement a gradually rising minimum wage to reach $15/hour. This follows a similar but unsuccessful attempt to raise the minimum wage in Davis last year. The speakers argued that increases in the minimum wage paid in Davis would bring many working poor out of poverty in addition to stimulating the local economy.

Many objections were raised against such a move both in this digital publication and in the Davis Enterprise when this proposal was discussed last year. Most objections, however, were based on political philosophies rather than objective facts as is discussed more fully below

Myth No. 1 – The $15/hour number was picked out of thin air without any objective basis 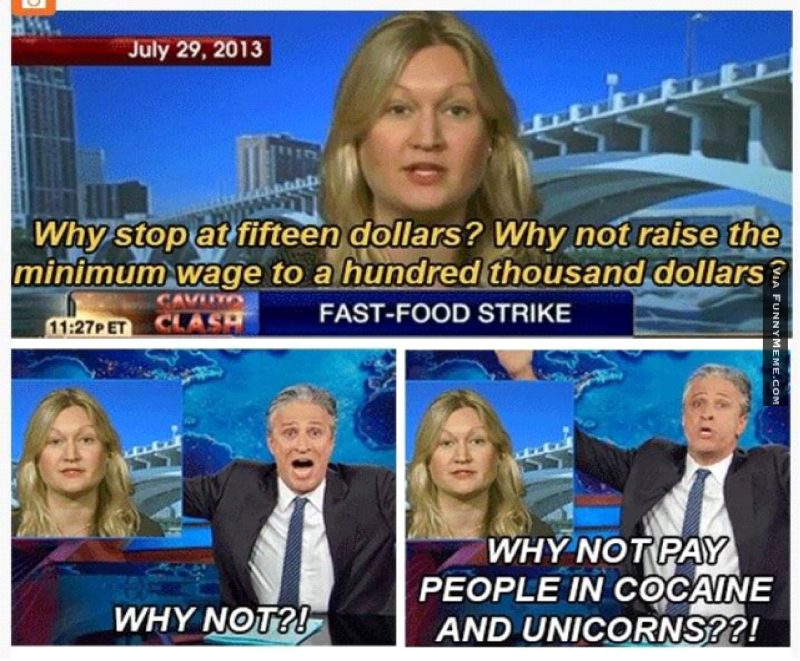 In fact, $15/hour is objectively determined to be even less than most workers must earn working full-time (2,080 hr/yr) to support their family as a sole provider in Yolo Co. without government subsidies. This determination was made through an online tool developed by Massachusetts Institute of Technology (MIT)  economist Dr. Amy K. Glasmeier, (see The Living Wage Calculator – http://livingwage.mit.edu/counties/06113) using official US Census and Department of Labor statistics and information.

Living expenses used in the calculations were specific to each County and include food, housing, transportation, medical, child care, and miscellaneous expenses such as for clothing. Not included are any additional educational or recreational expenses or savings for emergencies or retirement. It is truly a no frills, paycheck-to-paycheck budget analysis based on actual living costs in every county in the US.

According to the Living Wage Calculator, are the following minimum wages are necessary to meet this Yolo Co.-specific living standard:

This average equals $15.47 or $15.00 rounded down. Using any other combination of three other different family sizes produces an even higher required minimum Living Wage for the wage earner to meet living expenses without government subsidies.

We also note the the Living Wage Calculator is the most conservative of the the commonly used tools to estimate minimum incomes necessary to raise a family in different locales. The Economic Policy Institute (EPI) has developed a Family Budget Calculator which similarly uses local price data to estimate living costs and minimum wages necessary to meet those living costs  (http://www.epi.org/resources/budget/).

On average the minimum income required to raise a family as estimated by the Family Budget Calculator is approximately 23 – 60% higher than that deternibed by using the Living Wage Calculator depending on the family size, as shown below. 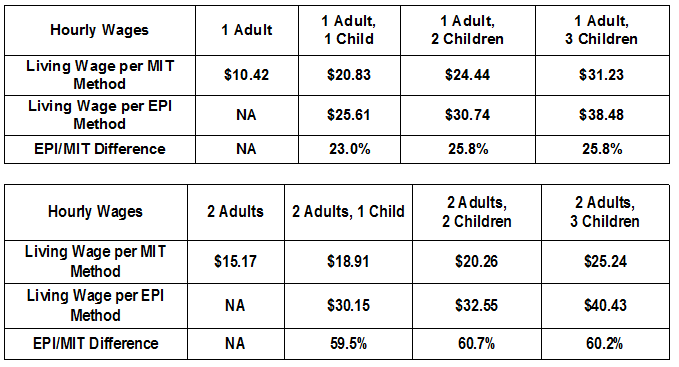 Myth No.2 – The minimum wage only affects uneducated part-time workers and teenagers living at home. It is not meant for people actually trying to support themselves and a family.

Such claims have never been substantiated by detractors of increased minimum wages.

According to this analysis, 97% of workers affected were in their 20s or older; 63% were in their 30s or older; and 26% had a Bachelors degree. San Francisco’s minimum wage increase also greatly increases pay to minority workers as 71% of minority workers in the City would see pay increases under the increased minimum wage approved in San Francisco.

Further, according to the US Department of Labor, 88 percent of people earning minimum wage nationally are age 20 or over and over half of people paid at minimum wage work a full-time schedule, In other words, minimum-wage work isn’t just supplemental employment. Many households are relying either fully or substantially on full-time, minimum-wage work to pay the bills. For tens of millions of agricultural workers, fast food workers, and retail workers, the minimum wage is what they depend on to survive.

To further illustrate this point, the following two graphs show the nationwide percentage of workers affected by a possible increase in the federal hourly minimum wage from $7.25 to $15 /hour as well as current average wages in Yolo Co. for different industrial sectors. 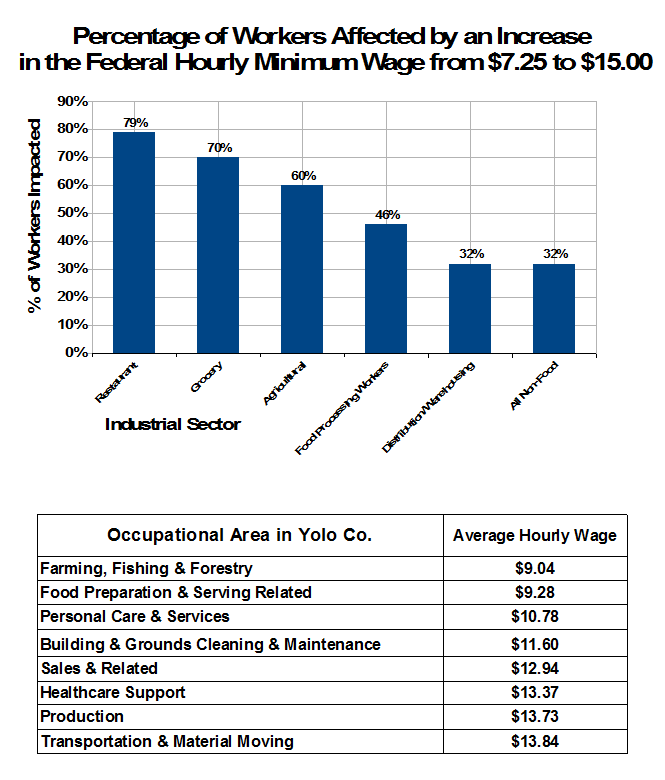 Myth No. 3 – Minimum wage increases will cause prices of everything to skyrocket

There is no doubt that increasing wages will result in price increases if corporate and business profit margins are otherwise maintained at current levels. However, many economic studies have shown the the magnitude of expected price increase can be quantitatively determined and are anticipated to be far less than claimed by detractors of minimum wage increases.

The level of price increases necessary in any industrial sectors necessary to maintain existing profit margins are a function of the total labor component of a product’s or service’s final price times the average wage increases that would result from an increase in the minimum wage to $15 per hour.

For instance, the current cost structure for different industrial sectors that would be most affected by increases in the minimum wage is graphically shown below. 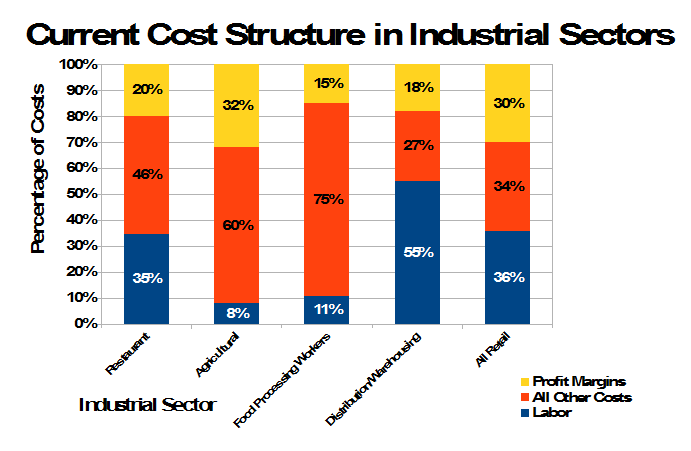 (Source: Dr. Chris Benner, Professor of Community and Regional Development at the University of California, Davis based on Bureau of Labor Statistics Current Population Survey (CPS) 2011 udated to 2014)

The anticipated effect on total payroll of different industrial sectors caused by a national increase in the minimum wage from $7.25/hour to $15/hour is shown below: With this information, the expected average national price increases in different industries caused by an increase in the minimum wage from $7.25 to $15 per hour can thus be calculated.

Percentage costs of labor component in the final product cost

Using the agricultural industry as an example:

When this methodology is applied across the most affected industrial sectors, the following price increases are anticipated nationwide assuming the same profit margins for the companies or businesses are maintained: 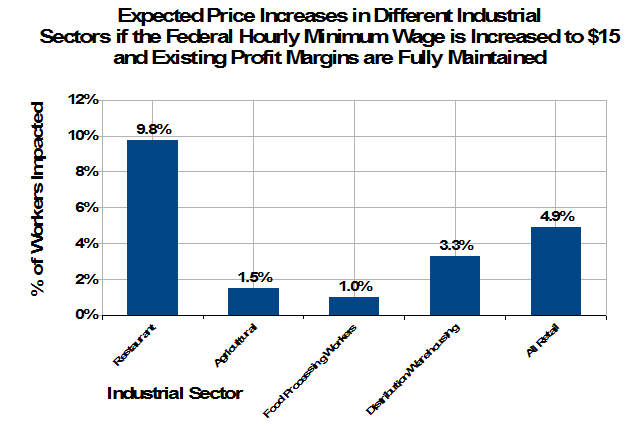 Local increase are expected to be less (particularly in the restaurant and retail sectors because the minimum wages are already substantially higher in California ($9 moving to $10 next year) compared to the rest of the nation.

Even so, I don’t believe an increase in the price of a local pizza from $8 to $8.70 or less is going to seriously impact local business sales especially because there will be a concurrent huge increase in the number of local low wage workers who can now afford to eat out a little more often offsetting any loss of sales due to higher prices. Nor would we expect a flight of pizza eaters from Davis to Woodland because the price of gas would eat up any potential food price savings (if a low wage worker could even afford a car) and Woodland eateries do not deliver to Davis.

Nationally, Dr. Chris Benner of UC Davis has indicated that he calculates the average cost to a family of 4 caused by a nationwide increase in the minimum wage from $7.25/hour to $15/hour affecting 56 million workers across 52 industrial sectors will be less than 40 cents per day. That’s a cheap cup of coffee a week which is a very small price to pay to bring millions out of poverty.

(Source: Dr. Chris Benner, Professor of Community and Regional Development at the University of California, Davis based on Bureau of Labor Statistics Current Population Survey (CPS) 2011 udated to 2014)

Myth No. 4 – Increases in the minimum wage will put companies out-of business and adversely affect the local economy

It is commonly argued that raising the minimum wage will hurt businesses by making them less profitable and decreasing their value to owners and shareholders. But that’s not necessarily the case, as the classic comparison of Costco and Walmart proves.

Costco and Walmart are two of the largest retailers in the United States, but they have far different philosophies regarding employee compensation. Costco’s starting wage for employees is $11.50 an hour, and their average wage is nearly $21 an hour. Walmart, meanwhile, announced earlier this year that it would raise its starting wage to $9 an hour—and its average wage is $12 an hour, far lower than Costco’s.

Given the large discrepancy in employee compensation, one might expect Costco to have much lower profitability and be worth far less on a comparative per share basis – but this isn’t the case. If you invested the same amount in both Costco and Walmart in 2005, your investment in Costco would be worth 4.5 times more right now than a similar investment in Walmart. (Sources: http://finance.yahoo.com/q/hp?s=COST and http://finance.yahoo.com/q/hp?s=WMT)

How can this be? Well it seems the driving factor behind this is customer satisfaction. Better-paid employees tend to be more satisfied in their jobs, which means they tend to take better care of customers and that makes customers want to come back more often. Happier employees are also less likely to have unexcused absences or quit which reduces employee turnover and training costs.

Smart business people recognize that salaries and benefits are not only expenses on an income statement but that human talent is a valuable resource in the increasingly competitive business world. Skilled employees working under the right incentives can generate enormous benefits for companies via increased productivity and customer satisfaction.

Perhaps the most succesful industrialist of the 20th century, Henry Ford, put it best when he stated in 1934, “No one loses anything by raising wages as soon as he is able. It has always paid us”. This was 20 years after Ford doubled workers salaries in 1914 which helped cut employee absenteeism from 10% to less than 1% and boosted sales 63% in one year (Source: Time Magazine, March 9, 2015)

There is other recent evidence that such increases in minimum wages do not adversely affect local business development and employment. San Francisco first raised its minimum wage in 2004 to $8.50/hour (a 36% increase at the time) and later added paid sick leave and health benefit requirements. They saw only a 2.8% increase in restaurant prices in the first year after implementation. Possibly as a result of the additional $1.2 billion in additional personal income generated by newly higher paid employees in the City from 2004 – 2011, food service jobs grew faster in SF (+18%) during this time period than in other Bay Area counties (+13%) over the same time period.

In 2013, San Jose increased its minimum wage by $2.00 per hour over the state minimum wage. In the following year, registration of new small retailers increased by 19%, unemployment decreased by 1%, and over 4,000 new jobs were created in the Restaurant & Hospitality sector

Myth No. 5 – The minimum wage is as high as it has ever been so there is no need to increase it further until inflation heats up or workers start producing more

Nor has the minimum wage kept up with continual increases in worker productivity over that time period. If it had, the current minimum wage would now be equal to $18.48/hour 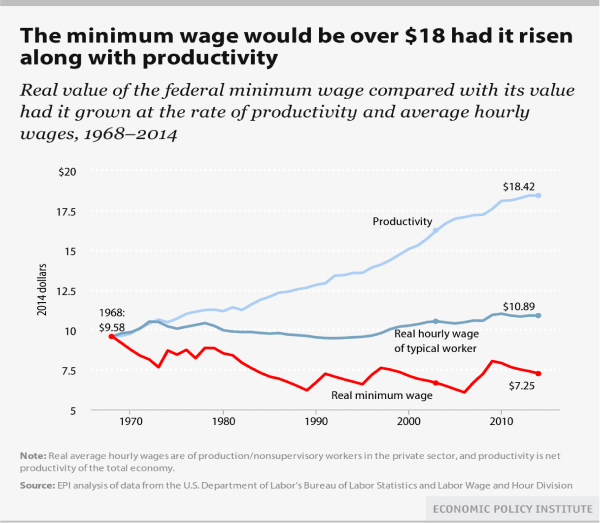