While the council has in the past talked about a parcel tax, they are now looking at consideration of a General Utility User Tax that could address unfunded needs such as road maintenance, bicycle paths/trails, and other priority capital projects. Right now, the city is looking at the state average of 5.5% raising approximately $5.3 million annually.

Staff writes, “Realizing the need to engage in long-term thinking and planning, the City Council directed a Council Revenue Subcommittee of Mayor Dan Wolk and Councilmember Brett Lee in the summer of 2014 to look closely at revenue measures, specifically to look at alternatives to enhance the revenue base in support of City services. They were to look at the array of long-term unfunded needs and priorities and identify a funding mechanism to address the City’s financial needs in support of unfunded projects.”

Utility users’ taxes “are levied as a percentage of the direct cost of the utility service delivered, and may be levied on utilities such as gas, electric, telephone/communications, water, sewer, sanitation and/or cable TV. The tax appears in the monthly billing paid by the customer and the tax is paid to the utility, which in turn remits the taxes to the local government that levied the tax.” 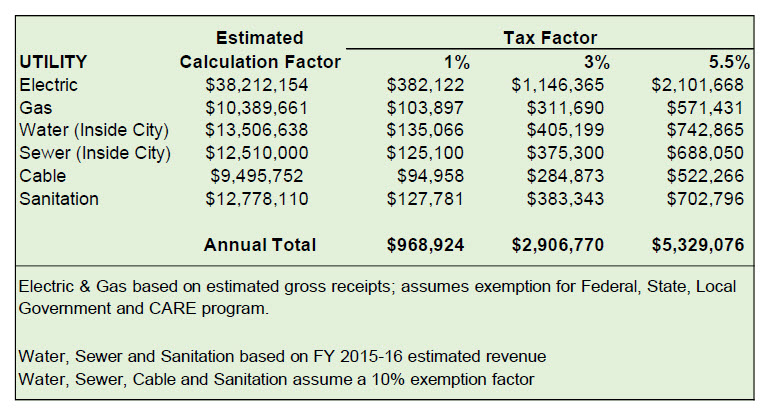 There are some advantages to this form of tax in that it is easy to collect and administer, it tracks with inflation, it applies to a broad range of populations, and it is not sensitive to economic downturns like other general taxes.

Unlike a parcel tax, it is imposed as a general tax which requires a simple majority vote conducted during the municipal election.

Staff writes, “It should be noted that one advantage of a UUT is that is a durable tax that is more consistent than the City’s most significant general taxes. UUT inflates with time and it tracks with growth in consumption of the elements that are subject to the tax. It is less susceptible to economic downturns than property tax and sales tax though it must be acknowledged that effective resource conservation may have some impact upon future consumption patterns. In a city such as Davis, which is largely built-out, a UUT would provide needed stability to the general fund budget.”

Staff believes the revenue measure should be placed on the ballot for the June 2016 election, which would also have city council candidates and likely at least one Measure R vote. This would require the council to make a final decision no later than February 2016.

The biggest downside to this type of vote is that, because it requires a simple majority, it is a general use tax, meaning that the city could use its monies for whatever purpose it sees fit. This is the problem raised during the sales tax campaign.

Writes staff, “A Utility Users Tax could be specified for certain types of services or projects, such as transportation, public safety, parks maintenance or animal control, but the identification of such restriction(s) in the adopting ordinance would invoke a requirement for two-thirds majority voter approval because the UUT would no longer be characterized as a general tax—it would be transformed into a special tax subject to the super-majority vote per the California constitution.”

As was discussed in the spring of 2014, one way partially around this is to have “companion measures on the same ballot for the purposes of having the voters advise the elected officials on how the new revenues should be used.”

As such, council back in 2014, quickly discarded the idea of an advisory measure.

Share:
Tags:Bike pathsGreenbeltsparcel taxParksRoadsSidewalksUser Tax
Previous : Superintendent Updates Parents on AIM/ GATE Changes
Next : My View: Is this a Budget to Celebrate?