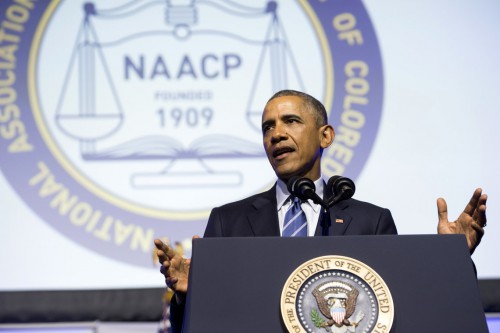 As I have stated many times on this site, I was expecting a lot more of President Obama on issues of race and mass incarceration than what we got in his first term to term and a half of office. We have seen glimpses of it before.

We saw a glimpse with the shooting of Trayvon Martin when he said, “When Trayvon Martin was first shot I said that this could have been my son.  Another way of saying that is Trayvon Martin could have been me 35 years ago.  And when you think about why, in the African American community at least, there’s a lot of pain around what happened here, I think it’s important to recognize that the African American community is looking at this issue through a set of experiences and a history that doesn’t go away.

We saw it this week when visiting the El Reno Federal Prison, as he said, “When they describe their youth and their childhood, these are young people who made mistakes that aren’t that different than the mistakes I made and the mistakes that a lot of you guys made.”

But these comments were not policy statements. And so when he addressed the NAACP and talked about mass incarceration it was different. He called out the problem: “Over the last few decades, we’ve also locked up more and more nonviolent drug offenders than ever before, for longer than ever before.”

He said, “That is the real reason our prison population is so high.  In far too many cases, the punishment simply does not fit the crime.”

This is an argument we have been making for some time. Mr. Obama did not go as far as we might have calling for legalization or decriminalization of drugs. But he called for clear reform.

He said, “If you’re a low-level drug dealer, or you violate your parole, you owe some debt to society.  You have to be held accountable and make amends.  But you don’t owe 20 years.  You don’t owe a life sentence.  That’s disproportionate to the price that should be paid.”

Perhaps this is a moment when, free from the confining bounds of politics, the President felt free to speak more freely. We saw the President move with the rest of the country on gay marriage as well. Or perhaps what he has seen in the last few years has truly transformed his thinking.

Author Michelle Alexander, who has been pushing this debate for some time, and coined the phrase “The New Jim Crow” to describe the oppressive effects of our incarceration practices, pointed out, “This is not the story of a heroic president demonstrating moral courage or the story of a bipartisan awakening to the dignity and value of poor people and people of color locked in cages. No. This is not that story at all. There was precisely zero political risk in what Obama and Clinton said to the NAACP this week. And Obama’s prison visit, while symbolically important, posed zero political risk.”

While she makes an accurate point, the importance of the President jumping on board should not simply be dismissed – especially if it results in real change.

President Obama may not stop there. Last week, Charles J. Ogletree, Jr., a law professor at Harvard University and prominent death penalty opponent who taught the President and First Lady Michelle Obama when both were students there, told the Washington Post that the President is “close” to opposing the death penalty. But “he’s not there yet… he’s close, and needs some help.”

The Post notes, “Obama has increasingly confronted racial disparities in the criminal justice system and in American society in in his second term.” It continues, “Obama, who has said he supports executions in some circumstances but raised concerns about the application of capital punishment, has not yet focused in this new push on racial disparities in capital trials — the most serious cases before any criminal court. Now, just as he publicly changed his opinions on other major social issues in which public opinion changed, like gay marriage, some have wondered whether the president will change his perspective.”

It was not that long ago when the death penalty seemed untouchable. Presidential candidate Michael Dukakis was bludgeoned on both the issue and, perhaps more accurately, his clumsy and poorly articulated defense of his position on the issue. From there, it seemed the issue was untouchable.

In 1992, Governor Bill Clinton flew back to Arkansas during the primaries to oversee the execution of one condemned person.

But in recent years, support for the death penalty has declined. People are concerned with the prospect of innocents being put to death, about the racial disparities of the system, and the cost and length of time needed to execute people.

The Post writes, “Ogletree predicted that the president will eventually have no choice but to oppose the death penalty, confronted with the data on racial disparities in capital punishment, as well as on the costs of litigating capital cases and on the number of defendants who are eventually exonerated.”

“Even if he doesn’t change his mind in the next year and a half, I think the public’s point of view is going to influence him,” Professor Ogletree said. “As a citizen, he can have an enormous amount of influence.”

There is still politics to be played here. The Supreme Court saw four of its justices battle it out over whether the death penalty remains constitutional. Former Attorney General Eric Holder reviewed the issue, but the Justice Department has yet to make a recommendation.

Moreover, some advocates believe that it would be better for the White House not to enter the fray. Right now states have moving away from the death penalty and the insertion of the President might polarize the debate.

79 thoughts on “Eye on the Courts: Obama’s Turn on Mass Incarceration and Social Justice Issues”