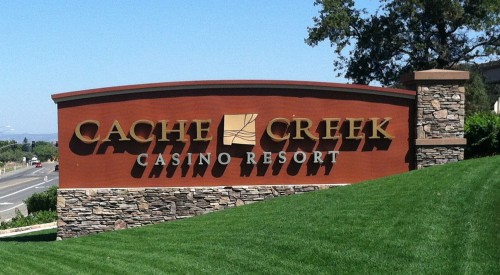 Closing arguments took place on the morning of July 1, 2015, in the case against Dorothy Dacosta.  The trial began Monday and only lasted a few short days.  Once the trial was placed in the jury’s hands on July 1, a guilty verdict was reached in less than two hours.

The defendant was charged with grand theft.  Her charges included theft by larceny and theft by appropriation of lost property.  According to the closing argument delivered by Deputy District Attorney Michael Vroman, the defendant Ms. Dacosta came across an empty slot machine, while gambling at Cache Creek Casino earlier this year, that contained a slip/ticket made out for $5,635.

A man, who was using the machine, had hit the jackpot but had left the machine unattended while he was operating an additional slot machine.  The defendant then took the ticket and proceeded to a cashier to cash it out.  She provided the cashier with her identification and within 16 minutes of finding the ticket left the casino and began to spend some of the winnings on various items.

Ms. Dacosta was later apprehended by police who identified her through her players’ club card and video surveillance.

In his closing arguments, Mr. Vroman argued that, due to the fact the defendant took the action to take the slip/ticket after knowing it did not belong to her, and then proceeded to cash the slip/ticket out, this proved she was guilty of the crimes of which she had been charged.

The DDA stated to the jury that, while the defendant was testifying, he had questioned her about each element necessary in proving she had committed the crimes in question.  Mr. Vroman stated that through the defendant’s own testimony she admitted to fulfilling each element.  This, according to the DDA, leaves the jury with only one choice – to find the defendant guilty.

Mr. Vroman pointed out, for example, that it was after 3 am in the casino, there were very few people on the high stakes floor and had she simply approached the other people, she would have encountered the rightful owner of the ticket. He noted that, when questioned about this by a sheriff’s deputy, she claimed, “Well, of course if I had asked that they would have claimed ownership.”

He noted that, under the jury instructions for wrongful appropriation of lost property, the defendant is required to make a reasonable attempt to locate the true owner. In this case, Mr. Vroman argued that the defendant did not ask the people gambling on the floor, she did not ask the casino staff, and she cashed out the ticket in roughly four minutes, leaving after 16 minutes.

The DDA concluded by stating that the defendant had the means to find the owner of the slip/ticket but she failed to take reasonable steps in finding the owner.  She did this, according to DDA, because she wanted the money for her own use.

During Deputy Public Defender Peter Borruso’s closing argument, he argued that her actions themselves showed the lack of a guilty conscience. Mr. Borruso argued that the defendant had only taken the slip/ticket after she had looked around and could not immediately locate the owner.  He argued that the casino surveillance video shows that Ms. Dacosta did not ever actually see the victim, nor did she see the victim using the machine.

The DPD stated that the defendant, while cashing out, went through casino personnel (not a machine) to collect her money.  In addition, she provided her identification. The casino security was able to easily locate her, by tracing the information she provided, to her home and then to her place of work.

This, according to Mr. Borruso, shows that she was not trying to deceive the police.  Mr. Borruso also claimed that the defendant was very cooperative and forthcoming with the deputy who questioned her.

When she was contacted by the sheriff’s deputy, she immediately agreed to come down to the jail. Once she was down at the jail, she was forthcoming with what she had done – her claimed actions were not contradicted by later evidence.

The facts of this case were not in dispute, but rather the underlying law. Mr. Borruso relied on a mistake of fact defense, arguing that Ms. Dacosta was not guilty of the crime because she had a reasonable belief that the property was abandoned.

A mistake of fact defense relies on the defendant’s conduct to have been lawful, under the facts as she reasonably believed them to be.

After Mr. Vroman’s rebuttal to Mr. Borruso’s closing argument, additional jury instructions were read by Judge David Reed.  The case was then handed to the jury.  Less than two hours later the jury came back with a guilty verdict.

Share:
Tags:Cache Creek CasinoCourt WatchGrand TheftYolo County
Previous : Envisioning the University of the 21st Century
Next : Guest Commentary: Is DJUSD Capable of Its Responsibility to Protect Our Children?

16 thoughts on “Honest Mistake or Grand Theft of Casino Winnings?”