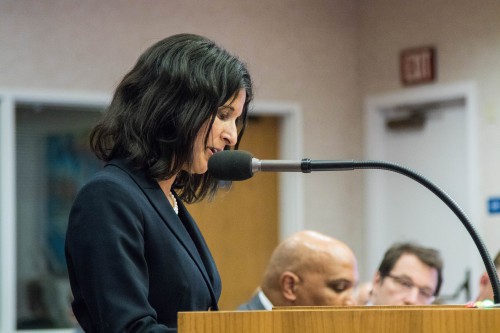 One of the interesting things that came out of some of the public comment is the notion that a self-contained GATE/AIM program is a form of segregation. Given the way that schools evolve during a child’s education, we see increased separate tracking of students over time.

When I was in elementary school, more than 30 years ago, beginning in the fourth grade we had tracks for reading and math – even though we were otherwise contained in a single classroom. We also had a magnet school for high achieving students after third grade.

This is actually an issue that extends well-beyond the confines of DJUSD, and therefore it might be instructive to look at the broader debate before examining our own district.

On November 18, 2014, The Atlantic published an article, “Modern-Day Segregation in Public Schools.” It notes, “The Department of Education has branded ‘tracking’—designating students for separate educational paths based on their academic performance—as a modern day form of segregation.”

The publication notes, “The education department and advocates have said tracking perpetuates a modern system of segregation that favors white students and keeps students of color, many of them black, from long-term equal achievement. Now the Department of Education’s Office for Civil Rights is trying to change the system, one school district at a time.”

They continue, “Proponents of tracking and of ability-grouping (a milder version that separates students within the same classroom based on ability) say that the practices allow students to learn at their own levels and prevent a difficult situation for teachers: large classes where children with a wide range of different needs and skill levels are mixed together. In many districts, the higher-level instruction in ‘gifted and talented’ or advanced placement classes is what keeps wealthier families from entirely abandoning the public school system.”

On the other hand, opponents argue that “the ill effects for the students in the lower-skilled classes negate the advantages that the students in the advanced classes gain. Many education researchers have argued that tracking perpetuates class inequality and is partially to blame for the stubborn achievement gap in the U.S. educational system—between white and Asian students on one side, and black and Latino students on the other.”

But the issue is more complicated than even this, as we get closer to home. For one thing is GATE effectively tracking? To answer that requires a better assessment of what the local GATE/AIM program is supposed to be than I have seen to date.

As we asked earlier this week, is GATE really a high achievers program? Is GATE for students who are technically “gifted” but underachievers, due to social issues or lack of interest in the mainstream classroom? And finally, which really is something that I gleaned from the study – is GATE something that will only benefit a small subsection of the student population or can we expect it to benefit much broader swaths?

It seems that opponents of GATE have offered up differentiated instruction as the antidote. The idea here is finding a way to meet the needs of many students within a single classroom.

As I read the California Department of Education’s guidelines on differentiated instruction, it notes that cognitive research results “suggest that a one-size-fits-all approach to classroom teaching is ineffective for most students and even harmful for some.”

The principles that point clearly to the need for differentiated instruction are listed as follows:

The real question, then, isn’t whether we have differentiated instruction, but how we structure it.

One of the interesting facets of the local debate on GATE is that the national concern over tracking programs in general, and GATE in particular, has been the disparate impact on children of color and the lower class.

Critics charge that tracking perpetuates inequality across classes and is partially to blame for the achievement gap where whites and Asians heavily outperform their black and Latino counterparts in the classroom.

Against that debate is the observation from Thursday that the people advocating change in the current program were far less diverse than the group of people defending the self-contained GATE program. 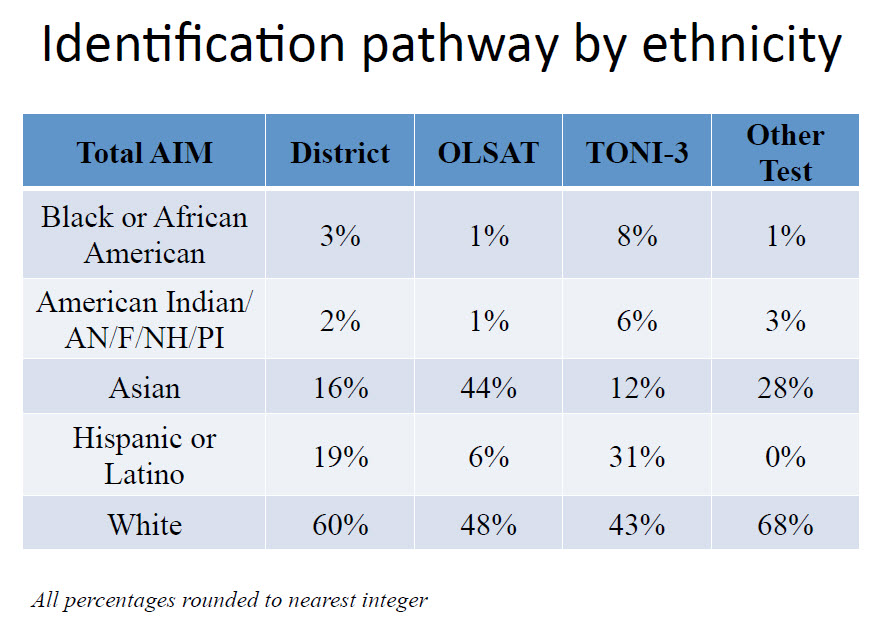 There are of course those who argue that we are simply over-identifying people for the AIM program. I want to again reiterate a key point – if GATE/AIM is benefiting 30-40 percent of students, who cares about over-identification? Our question should be to determine how to best meet the needs of all of the students, and too many people seem to want to use the label “GATE” or “AIM” as a status symbol rather than an educational tool.

But for this conversation, the other important thing to note is what happens if we limit our identification to the OLSAT (Otis-Lennon School Ability Test).

We end up with a much smaller Black/Latino/American Indian pool of identifiers (I use identifiers because it has been brought to my attention that the people who actually end up in the program differ markedly from those identified for the program – something else we need to examine).

The OLSAT produces the kind of pool that the critics of tracking seem concerned about – 92 percent of identifiers are White and Asians, with only six percent Hispanic and one percent each for Black and American Indian.

Those numbers change drastically under TONI (Test of Nonverbal Intelligence) where the numbers rise to 31 percent Hispanic, 8 percent Black and 6 percent American Indian.

Professor White criticizes these findings, arguing that “the current rescreening process is fundamentally flawed.” The “TONI and OLSAT have dramatically different psychometric properties, one score should not simply replace the other.”

He noted, “The TONI is designed to address only a limited range of the search and serve criteria, yet is being applied for all of them.” He concludes, “The TONI is clearly identifying a more diverse group of students than the OLSAT, but as a function of student selection rather than test bias.”

My review of the literature on non-verbal testing offers a very different view, where non-verbal testing not only is appropriate for those with speech, language, and learning disorders, but also low socio-economic groups who have more limited language foundations than their counterparts.

TONI might not be the best non-verbal testing tool, but it is clear that OLSAT produces its own biased sample that Professor White did not seem to account for.

For me, the bottom line is that there seems to be a lot of complicated issues here. We need to examine current practices with an eye for what is best for the students. We need to discard GATE as a status symbol and look to it as a teaching tool and a practice, and we need to direct our practices towards the ones that will help as many students as possible reach their full potential.

Terms like segregation are historically loaded, and may not apply to the local situation. We should attempt ways to avoid polarizing descriptions on an issue that is already polarizing.

Share:
Tags:AIMDifferentiated InstructionDJUSDGATEOLSATSegregationTONITracking
Previous : Economic Report on Innovation Parks Shows Tremendous Potential for Davis Tech Sector
Next : What if the Vanguard Stopped Running? And What You Can Do About It?

43 thoughts on “Analysis: Is GATE a Modern Day Segregation System?”