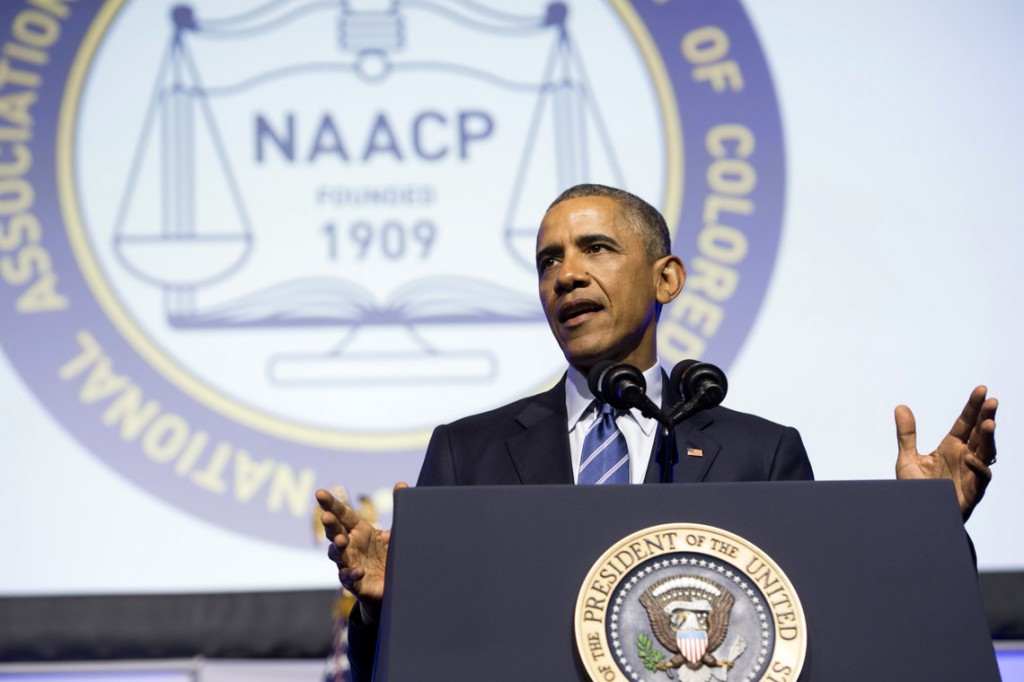 President Obama is using the tail end of his presidency to address a number of long-vexing problems. In recent years, concern over the rise of mass incarceration and its impact on poverty and standard of living has come into focus. On Tuesday, President Obama used a speech to the NAACP’s National Convention in Philadelphia as a backdrop for highlighting the unfairness in the criminal justice system.

President Obama said, “Mass incarceration makes our entire country worse off, and we need to do something about it.”

Sixty percent of U.S. prisoners are either African-American or Latino. “About one in every 35 African American men, one in every 88 Latino men is serving time right now,” the President said. “Among white men, that number is one in 214.”

As the President noted, today’s criminal justice system “remains particularly skewed by race and by wealth,” and has adverse ripple effects on our country’s families and communities.

“What is that doing to our communities? What’s that doing to those children?” he asked. “Our nation is being robbed of men and women who could be workers and taxpayers, could be more actively involved in their children’s lives, could be role models, could be community leaders, and right now they’re locked up for a non-violent offense.”

The President noted, “We’re just at the beginning of this process, and we need to make sure that we stay with it.” He laid out three key areas of needed reform: the community, the courtroom, and the cell block.

“The best time to stop [crime] is before it even starts,” President Obama said, arguing the need to invest in America’s children. “If we make investments early in our children, we will reduce the need to incarcerate those kids.”

According to the White House, “One study shows that for every dollar that we invest in preschool, we save at least twice that over the long run in crime reduction. And summer jobs for teenagers are only a fraction of the cost of incarceration down the road.”

The President also moved to shorten the mandatory minimum sentences for nonviolent drug crimes, or eliminate them entirely. Earlier in his presidency he signed the Fair Sentencing Act, which critics believed did not go far enough, but which attempted to reduce the 100-1 sentencing disparity between crack and powder cocaine, and eliminated the mandatory minimum sentence for simple possession of crack cocaine.

This week, he said, “For nonviolent drug crimes, we need to lower long mandatory minimum sentences — or get rid of them entirely. Give judges some discretion around nonviolent crimes so that, potentially, we can steer a young person who has made a mistake in a better direction.”

He added, “We should pass a sentencing reform bill through Congress this year. We need to ask prosecutors to use their discretion to seek the best punishment, the one that’s going to be most effective, instead of just the longest punishment. We should invest in alternatives to prison, like drug courts and treatment and probation programs — which ultimately can save taxpayers thousands of dollars per defendant each year.”

He put his money where his mouth was by cutting short the sentences of 46 people who have been serving time on nonviolent drug offenses in federal prison, including 14 who were serving life sentences.

In his letter he wrote, “The power to grant pardons and clemency is one of the most profound authorities granted to the President of the United States. It embodies the basic belief in our democracy that people deserve a second chance after having made a mistake in their lives that led to a conviction under our laws…. I am granting your application because you have demonstrated the potential to turn your life around. Now it is up to you to make the most of this opportunity.”

He explained his reasoning, citing “the fact that we spend over 80 billion dollars a year in incarcerating people, oftentimes who have only been engaged in nonviolent drug offenses.” Saying that the 46 people being granted clemency “were not hardened criminals” when they were sentenced years ago, President Obama made clear that he believes that the American justice system has been too harsh.

“Their punishments didn’t fit the crime,” he said. “And if they’d been sentenced under today’s laws, nearly all of them would have already served their time.”

The President also addressed the issue of prisons. He said that, while imprisoned people have made mistakes, we have an obligation to increase the possibility that they can get their lives back on the right track. And part of that starts with fixing the conditions of our prisons, and offering more job training for inmates.

He said, “We want to be in a position in which if somebody in the midst of imprisonment recognizes the error of their ways, is in the process of reflecting about where they’ve been and where they should be going, we’ve got to make sure that they’re in a position to make the turn.”

President Obama argued that we shouldn’t tolerate conditions in our prisons that “have no place in any civilized country” — such as overcrowding, gang activity, or rape. The President also asked Attorney General Loretta Lynch to review the overuse of solitary confinement in our prisons, which is often more likely to make inmates more alienated, hostile and violent.

The President made history this week, becoming the first sitting president to visit a federal prison facility when he visited the El Reno Federal Correctional Institution in El Reno, Oklahoma.

The President noted that, but for the “grace of God,” he could have landed there.

The President has both publicly and privately acknowledged his indiscretions as a youth. President Obama said on Tuesday he was struck by the social inequities of our system that result in some misbehaving kids ending up behind bars instead of in front of a principal’s desk.

“When they describe their youth, these are young people who made mistakes that aren’t that different from the mistakes I made, and the mistakes that a lot of you guys made,” President Obama said after talking to some inmates incarcerated for drug possession charges. “The difference is that they did not have the kind of support structures, the second chances, the resources that would allow them to survive those mistakes.”

But not everyone believes that the President has gone far enough. Michelle Alexander, the former ACLU leader and author of The New Jim Crow: Mass Incarceration in the Age of Color Blindness, offered a different perspective of the President’s efforts in a Facebook post this week.

History is being made this week. After decades of relentless “tough on crime” and “war on criminals” rhetoric from politicians, and after of millions of lives destroyed by our criminal injustice system, this week our current president, and a former one, announced that it was time to reverse course.

Days ago, President Obama gave a speech to the NAACP calling for major reform of our criminal injustice system.

Former President Clinton addressed the same crowd, offering an (utterly insufficient) apology for his role in birthing the system of mass incarceration. And today, President Obama is visiting a federal prison — treating those held in cages as human beings worthy of our collective concern — something no other president in history has ever done.

No one can deny the significance of these events. But I hope we do not lose sight of what is truly happening here. This is not the story of a heroic president demonstrating moral courage or the story of a bipartisan awakening to the dignity and value of poor people and people of color locked in cages.

No. This is not that story at all.

There was precisely zero political risk in what Obama and Clinton said to the NAACP this week. And Obama’s prison visit, while symbolically important, posed zero political risk. The reason why zero moral or political courage has been required for this week’s events is the real story here.

It’s a story of what happens when the perceived interests of white people of great privilege and power happen to align with the interests of poor people and people of color who are suddenly refusing to tolerate business as usual and who are building a bold and rebellious grassroots movement that threatens the status quo.

This is not to deny that people of all colors, faiths, and walks of life are waking up to the human rights nightmare that is occurring in our so-called “justice system.” And this is not an attack on Obama.

Obama is a brilliant politician. He is quite likely a good husband, father and friend. What he is not is a courageous leader on issues of race or criminal justice. At least not yet, and we are deep into his second term.

We are at a critical moment, but there is nothing inevitable about the change that must come. And the real heroes are those whose names we do not know, but who have been working tirelessly for this moment for many, many years.

So while we, quite rightly, ought to celebrate the milestones that have been reached this week, I hope that we will also take time to pause and remember those who have been left behind, including the tens of thousands of people who were denied clemency by President Obama this week. People like Sharanda Jones.

The story of Sharanda Jones in the Washington Post this week chronicles “From a first arrest to a life sentence,” arguing, “Clemency is the only way out for the thousands of nonviolent drug offenders serving life terms in federal prison.”

Ms. Jones in 1999 was sentenced to life in prison after her conviction on a single cocaine offense. “She was a first-time, nonviolent offender.”

President Obama put this issue back in the focus this week, but it remains clear that much work needs to be done to restore equity and justice in the system.

Share:
Tags:Mandatory SentencingMass IncarcerationNAACPNew Jim CrowPresident Obama
Previous : An Open Letter to the Anti-GATE Majority on the DJUSD School Board
Next : My View: Is Housing at Innovation Parks a Non-Starter?