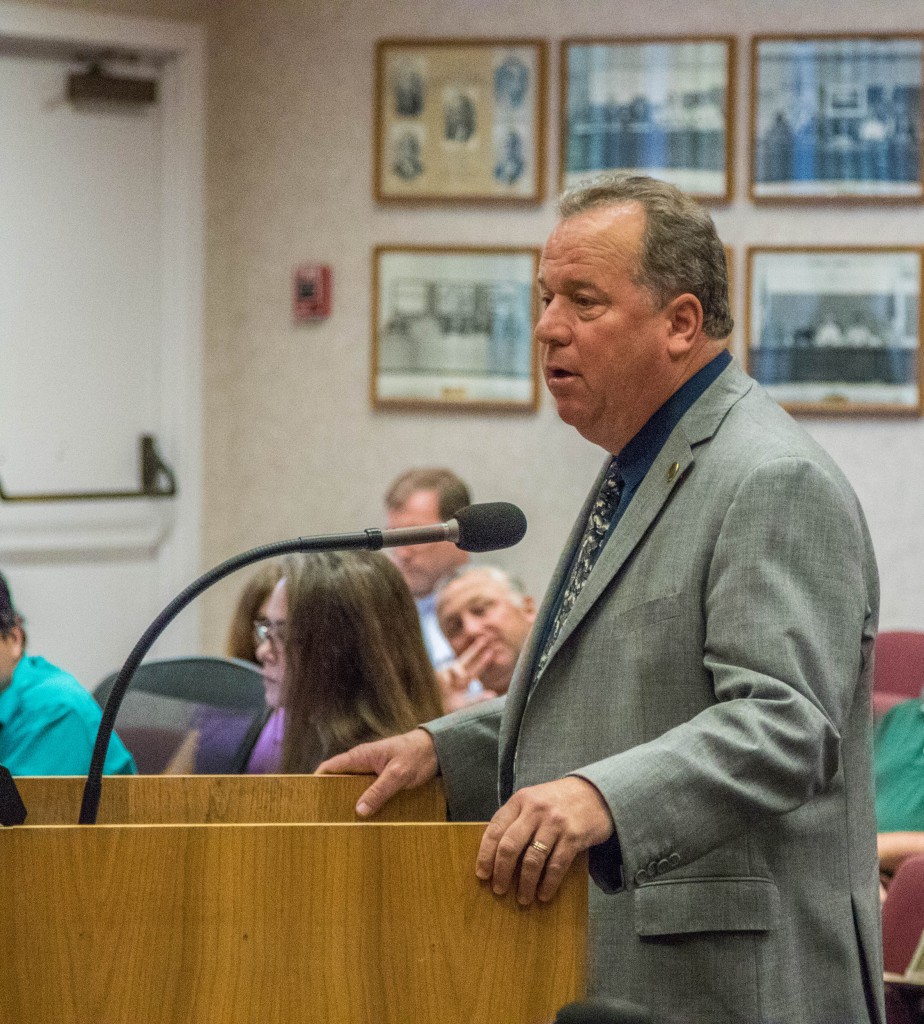 Bill Dodd, however, told the Vanguard on Tuesday afternoon that no final decision has been made. Back in June he told the Vanguard that he was working hard to meet with key stakeholders in the district and “very excited” about the prospect of running. However, he was not there yet. He said in June that he would make a firm decision within 30 days.

While Mr. Dodd has not formally announced, it appears to be all but a done deal. The Vanguard received a flyer for an event, urging the public to join a group of public officials and former public officials “as we announce our support for 2016’s District 3 State Senator: Assemblyman Bill Dodd.” The event is scheduled at the Eagle Vines Vineyard on July 20 in American Canyon. 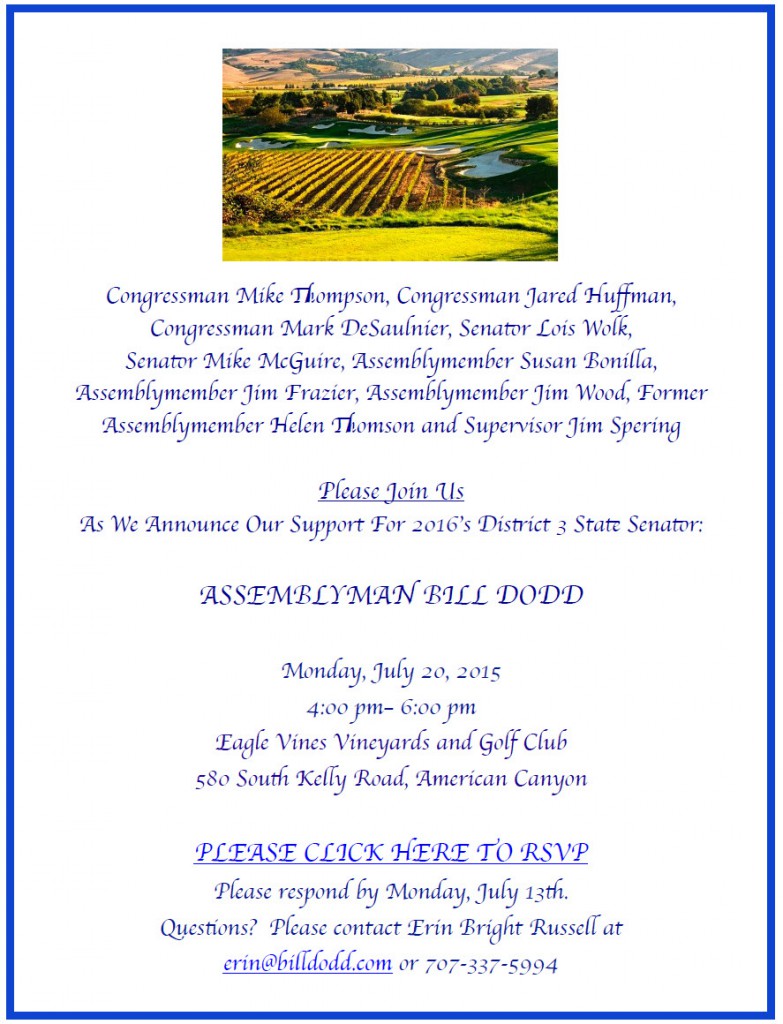 Bill Dodd will presumably officially announce sometime before the event. He has lined up some formidable support including Congressmen Mike Thompson, Jared Huffman and Mark DeSaulnier. Also supporting him are current State Senator Lois Wolk, who is being termed out, and a number of Assemblymembers including former Assemblymember Helen Thomson.

Bill Dodd’s potential candidacy sets up an intriguing matchup between Bill Dodd, a first-term Assemblymember from Napa who in the last few years changed party registration from Republican to Democrat, and three-time Democratic Assemblymember Mariko Yamada, who was termed out in 2014 and has since the fall been campaigning hard for the Senate seat.

She told the Vanguard in June that she is working hard and expects a strong challenge for the seat.

Her campaign announced it had secured the endorsement of the California Nurses Association, which she said was also an earlier supporter of her 2008 campaign – where she surprised many by defeating West Sacramento Mayor Christopher Cabaldon.

If Mr. Dodd does decide to run, this will be a tough battle that has many observers a bit surprised that a first-term Assemblymember would give up a safe seat for a race that may be a coin flip at best.

In the meantime, Mr. Dodd’s move to the Senate opens the Assembly seat for Davis Mayor Dan Wolk, who is said to be running for sure. The source told the Vanguard that he is all geared up to run, but won’t make any formal announcement prior to Mr. Dodd’s announcement.

Mayor Wolk finished third in last year’s race, but an open Assembly seat gives him a second chance at the legislature – just as his mother, Senator Lois Wolk, is termed out. Once Mr. Dodd announces his intentions, it could set off a series of dominoes.

Observers expect that Mr. Wolk would have to face another candidate from the Napa area that can match the eastern portion of the district in terms of money and voters. Meanwhile, in Davis, Mr. Wolk’s departure would open up a council seat that could be the key for who controls the Davis City Council.

A wild card for the Assembly is two-time Yolo County Supervisor Don Saylor, a former Mayor of Davis. The source told us that they do not expect that Don Saylor would challenge Dan Wolk. They have similar constituencies and Mr. Wolk would appear the more formidable candidate. 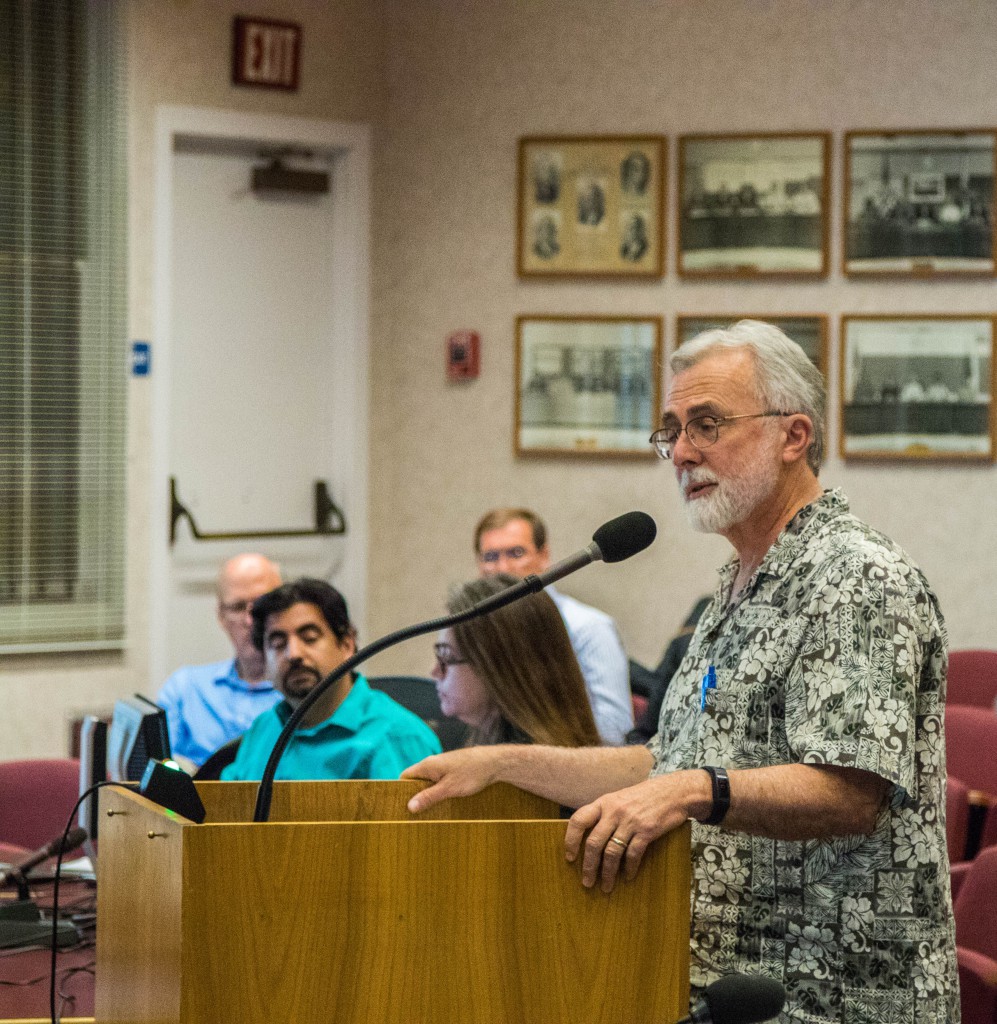 Nevertheless, the Vanguard has learned that Mr. Saylor reached out to the Davis City Council for individual endorsements, but to our knowledge he has yet to receive one.

Last year, Bill Dodd was able finish first in a contested primary where two Davis Democrats, then-Mayor Joe Krovoza and now-Mayor Dan Wolk, split the vote enough in the eastern portion of the district to allow Bill Dodd and Republican Charlie Schaupp to finish 1-2. Dan Wolk finished a close third, but was not able to beat Mr. Schaupp for second.

In the meantime, in 2008 Mariko Yamada, then a county supervisor, stunned many by defeating heavy favorite West Sacramento Mayor Christopher Cabaldon. That campaign featured a battle between the Sacramento Central Labor Council and EdVoice, a nonprofit grassroots network of parents and educators opposed to the teachers’ unions and which pumped in money and campaign workers against the independent expenditure campaign.

In 2014, the unions would come with money but not huge amounts of volunteers for Dan Wolk. Bill Dodd was able to, through the help of third party expenditures, match the union spending spree that made questionable attacks on Mr. Dodd.

In addition to the intriguing match up between the current Assemblymember and the past Assemblymember, Bill Dodd’s potential entry sets up another interesting development for Davis politics.

Stay tuned, as Bill Dodd’s decision in the next 30 days is likely to have far-reaching impacts on the State Assembly and the Davis City Council races.

20 thoughts on “Source: Dodd to Run For Senate; Wolk for Assembly”