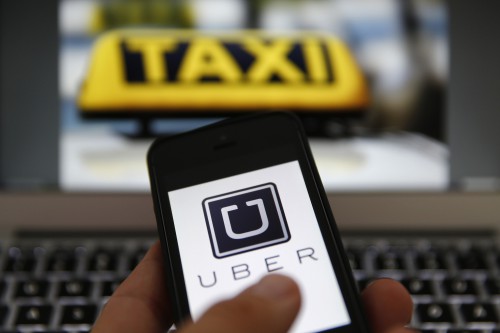 Two new Bay Area companies, Uber and Airbnb, are shaking up their industries, causing a political war, and laying bare the conflict between a truly free economy, and those that prefer monopolization in a “permission-only” public-private cartel relationship.  Together these two shared-economy, multiple-use-of-assets, companies are illuminating the great divide between the union-political machine and everyone else.  They are also helping bring awareness to the tremendous social and economic benefits of capitalism and free enterprise – where the constant strive to build a better mouse trap propels entire industries to much greater efficiency, value and growth.

For those that have not heard of Uber, it is a ride sharing business built on a social networking platform.  If you have a newer car, insurance and a good driving record you can be an Uber driver.

Uber uses a smart phone application and cellular phone location services to connect drivers with those needing a ride.  As a driver, you can pick your hours and territory.  As a rider, you simply put in your destination and request a ride.  Uber alerts the phone of the nearest driver, and that driver accepts or declines.  If the driver declines, the request goes to the next nearest driver.  When the driver accepts, the rider gets a picture of the driver and a description of the driver’s car.  The rider can even check past reviews of the driver.  The rider also gets an estimated cost.  At this point the rider can accept or reject the driver.  If the driver is accepted, the rider sees a map and an icon of the driver’s car making its way to the pickup location along with a countdown estimated minutes until arrival.  The ride cost is fixed with no tipping required.  There is no cash exchanged… Uber bills the rider’s credit card from their Uber account.  A receipt is emailed along with an Uber request to rate the driver. Uber takes a cut and then pays the driver based on a fee-rate schedule.  Drivers that gain experience and get good reviews are paid a higher rate.  Larger cars and luxury cars also get a higher rate.  Rates automatically adjust upward for busy times and late night or early morning hours.

Not in a big hurry and favor discount fares? Chose the “ride share” option and the Uber app will attempt to find other ride-sharing riders to load up a driver’s car.

Taxi drivers don’t like Uber because it is cutting into their business.  Tax and spend politicians and government bureaucrats don’t like Uber, because they collect a lot of tax money from the taxi business.

There is no question that Uber is transforming the taxi business.  In fact, in many areas of the country, taxi drivers are defecting to Uber.  Although their rates are lower as Uber drivers, their taxes are also lower.  They can set their own hours and choose their own territory.   They like the simple to use Uber phone app… generally much better than the taxi dispatch service.

But riders absolutely love Uber!  It is easier, safer, cleaner, more efficient and cheaper than taxis.  Uber helps reduce the number of cars on the road as people with cars share their excess passenger capacity.  Uber is great for seniors and students that cannot afford high taxi costs.  Uber is more efficient… much easier than calling for a cab.  Uber is helping to reduce occurrences of drunk driving as it is easier and less expensive for people to order a ride that to risk driving.   Since the fare is pre-determined and fixed, unlike a Taxi driver, Uber drivers don’t take longer routes just to increase charges.   There is no uncomfortable tipping.  Uber drivers tend to be more reliably courteous and friendly because they are rated.  The Uber app is convenient and informative: riders get an accurate estimate of driver arrival.  Riders get a receipt emailed to them, and get to rate their driver.

Airbnb is a website for visitors to rent out lodging from homeowners and other renters. It has over 1,000,000 listings in 34,000 cities and 190 countries.  Airbnb’s tagline is “Belong Anywhere – Rent unique places to stay from local hosts in 190+ countries”.  The San Francisco company books more nights than does Hyatt Hotels worldwide at relatively low prices.

Visitors search through a list of available options with pictures and reviews. Rentals with poor reviews can get removed by Airbnd.  After booking, visitors generally contact the property owner directly via email through the Airbnd site.  Arrangements are made for property use instructions and keys.

Airbnb provides a way for homeowners and apartment dwellers to make some money by renting out their homes.  Homeowners and renters love it because they can help pay their exorbitant real estate costs. But mostly visitors love it.  Why rent an expensive hotel room where everything is marked up, when you can stay at a cozy home with a kitchen within walking distance of a market?

“The process of industrial mutation that incessantly revolutionizes the economic structure from within, incessantly destroying the old one; incessantly creating a new one“.

For a business to remain competitive and successful it must constantly innovate and improve. However, old business designs and structures don’t easily get reformed.  And over time bureaucracy sets in where power tilts to those with a vested interest to maintain the status quo.  Creative destruction is the renewing force.  It pulls the weeds from the business and from the larger economy.  It plants new gardens of greater value that lead to economic growth.

Innovation business thinker Peter Drucker advocated that big business add a Chief Destruction Officer to their executive suite and report to the CEO.  The thinking is that strategy and plans for disruption and reform are as important as are ensuring profitability from current operations.

The computer industry is a fabulous example of the great social and economic benefits of creative destruction.  In the 1970s and 1980s, IBM dominated the computer industry.  Computers at that time were room-filling machines that cost millions and required specially-trained technicians to program and operate them.  IBM was creatively destructed in the 1990s when PCs came of age.  Lou Gerstner took over for IBM in 1993 at a time when IBM’s sales, profit and market share were in decline.  The destructive forces were Microsoft and Intel.  And then the Internet became a destructive force disrupting the PC market.  And next came the creative destruction force of Apple and the age of the handheld computer with processing power thousands of times what the old room-sized million dollar IBM computer could provide.

Of course some industries are not so dynamic and are not as easily changed.  The taxi and hotel industries are good examples… they have remained pretty much the same for decades if not centuries.

But eventually all industries face the challenge of creative destruction and in every case, consumers benefit and the industry as a whole expands.

The taxi and hotel industries complain that it isn’t fair because they pay so many taxes, and because Uber and Airbnb are different business models, they escape the taxes.  But then there was nothing preventing the taxi industry or the hotel industry from changing their business model to be like Uber and Airbnb.  These two industries failed to innovate and hence they are being creatively destructed for the benefit of consumers and the private economy.

So if the public likes Uber and Airbnb and they will help grow the industry, why would politicians not celebrate them as a positive creatively destructive force in our economy?  The answer is simply money.  More specifically, is the money going to high-priced union labor and government from high taxation.

Innovation that leads to creative destruction, by its nature, challenges politicians that traditionally benefit from, and give policy rewards to, organized labor.   And there is a populist movement with Democrats running for President – namely: Hillary Clinton, Elizabeth Warren and Bernie Sanders – to vilify business for not paying workers more.

Hillary Clinton has come out characterizing the on-demand economy as committing wage theft. Elizabeth Warren has come out demanding that Uber classify their drivers as employees rather than independent contractors… even though Uber drivers meet all the requirements for as independent contractors.  Obviously this requirement would mean an end to Uber… something Ms. Warren knows.  San Francisco Democrats are demanding that Airbnb pays hotel taxes… including back taxes.  New York Democrats would do the same if not for the overwhelming support for Airbnb from the voters. These Democrats know that hotel taxes would kill Airbnb.

However Democrats may be open their own creative destruction for social cause including new definitions of marriage, the thought that there might be some for-profit contracts between consenting adults gives them fits.  New business like Uber and Airbnb don’t quite fit the established regulatory categories.  And the political response is to kill them with new taxes and new regulatory pressure… attempting to stuff them back into the “permission economy” where they can be controlled by the politicians and the legalized cartel can get their cut.

It is clear that Uber and Airbnb better represent our core principles of democratic free market capitalism.  These two revolutionary businesses represent the best of what this country is about.  Democrats should tread lightly on this topic, and Republicans should be ready to pounce on any attempt to damage Uber and Airbnb only to keep filling those union and politicians pockets.

This is all a good topic to discuss with your friendly Uber driver next time you hitch a ride to stay in that beautiful and affordable Airbnb rental.

41 thoughts on “The Welcome Disruption of Uber and Airbnb”