On Tuesday evening, the Old East Davis Neighbors continued to complain about the process and height of the proposed Trackside project. Two weeks ago, 15 residents came forward during public comment, complaining of the failure by the development team to meet with neighbors prior to submitting their project application to the city, as well as that the proposed five-and-a-half story building was a poor fit for the existing houses directly to the east.

On Tuesday night, Kemble Pope, project representative and a managing member of Trackside Center, responded to the criticism. He told council that he takes seriously the concerns of the neighbors. “We want to have a productive dialogue with each and every one of you,” he said.

While he declined to respond directly to statements made at the previous meeting, he did say, “We are open to talking to anyone about anything.”

He read from the first paragraph of a letter sent earlier in the day to the Old North Davis Neighborhood Association, stating, “We apologize that our preliminary outreach efforts to our neighbors in the winter and spring of 2015 regarding our proposed redevelopment project did not meet your standards for collaboration. It has always been our intention to work together with the entire community to create a project that pursues environmental sustainability, builds and promotes a vibrant downtown, promotes community, improves neighborhood infrastructure, strengthens and diversifies our city’s tax base, drives innovation, and ensures a safe and healthy environment within the context of our property’s unique location. We acknowledge that we have strained the relationship with the neighborhood; we are committed to improving our communications and repairing the relationship with our neighbors.”

The letter went on to state, “Our goal is to create a transformational infill project that is locally-funded and adheres to smart-growth principles with a transit, bicycle and pedestrian orientation.We want our property to enhance the neighborhood, provide unique high-quality, downtown living and retail opportunities and serve as the eastern gateway into Downtown Davis. We look forward to working with our neighbors in Old East Davis, Downtown Davis and the entire community to refine our proposal for a privately-funded redevelopment project at 901-919 Third Street.”

Located at the southwest corner of the city block bounded by 3rd/4th Street and California Northern Railroad’s short-line railroad (RR) and I Street, the quarter-acre property represents “one of the largest infill opportunities in the Core Area of Davis.”

It is currently an underutilized site, with two commercial buildings, each one-story, that take up about half of the lot; the other half is private parking. 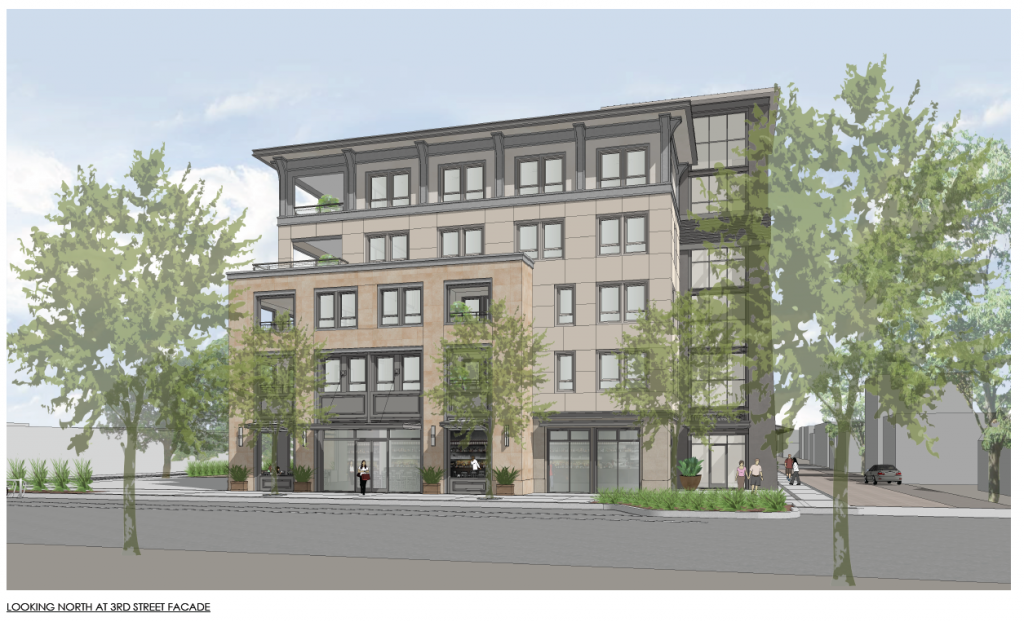 In their project description, they write, “This project is being created by a collaborative design-build process with ongoing input from the company’s owners, many neighbors in Old East Davis and Downtown Davis, City Staff, community leaders and members of the Davis City Council.”

However, it is here where the project received criticism – not just for the height of the building, but also that many of the neighbors claimed to have never been contacted.

Two weeks ago, Tia Will told the council that she is “absolutely delighted at the thought of an upgrade to these buildings which are very old, clearly past their prime, and needing development.”

However, she was critical of the project as designed. “The proposal is to put in a six-story building in an area in which the maximal height of residences is two stories and many of them are one-story. I see this as a clear departure from the nature of the existing neighborhood.”

Rhonda Reed, President of the Old East Davis Neighborhood Association, noted that many of her neighbors have never come to council to speak before. She said she is disappointed at the portrayal that the neighbors had been contacted in this process.

She is concerned that the developers did not engage the community in this process. “The concerns over mass and scale have been well-demonstrated tonight,” she told the council. “The transitional guidelines from the core area to the neighborhood area are very explicit in terms of how that should be done, this project isn’t even close.”

John Douthitt closed the comments and told the council he has talked to people about the scale of the project – “They’re talking about a six-story building up there. Uniform, everybody’s response is ‘you’ve got to be kidding,’ It’s not sort of like ‘maybe.’” He said, “There’s no possible way that anybody would think that made sense.”

At the close of public comment, Mayor Dan Wolk mentioned the possibility that the council look to the long range calendar to see about the city having a role in facilitating dialogue. But several councilmembers told the Vanguard that the two sides simply have to get together and that public comment should not be used for back and forth dialogue between the parties.