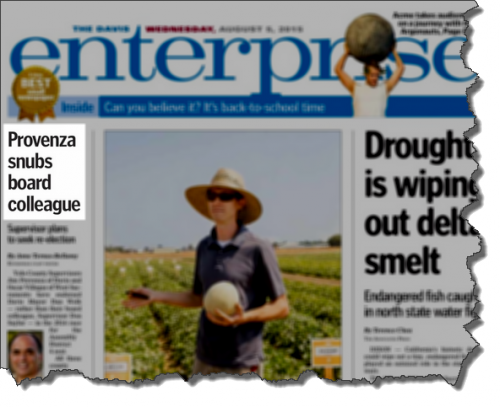 When Supervisor Jim Provenza endorsed Davis Mayor Dan Wolk over his colleague Supervisor Don Saylor, it was bound to raise some eyebrows. And if the Enterprise were running a column on their editorial page or an analysis of the campaign, it might be appropriate to have the blunt and subjective headline.

But on the front page of the newspaper, the headline, “Provenza snubs board colleague,” which appeared in the print edition only, seems inappropriate and out of place.

For his part, Jim Provenza, who has been on the Board of Supervisors since 2008 and told the Vanguard recently he planned to run for a third term, took the high road.

In a letter to the Enterprise, Mr. Provenza explained that there was “no snub intended with the endorsement.”

“I am writing to correct a mistaken characterization that appeared in The Enterprise, implying that my endorsement of Mayor Dan Wolk for California Assembly was meant as a ‘snub’ to other candidates,” he wrote.

In fact, in 2014, Jim Provenza had endorsed Dan Wolk over fellow City Councilmember Joe Krovoza and ultimate winner Bill Dodd. In fact, he was an early endorser back in September 2013.

Back in 2013, he said, “I have worked closely with Dan Wolk, and I know he has the experience and the skills to bring people together to represent us effectively in the State Assembly. Dan is firmly committed to restoring our public education system and making our community and state a better place for our children and grandchildren.”

Similarly, in his latest letter, Supervisor Provenza said, “In 2014, I endorsed Dan, and I am honored to again endorse him for this office in 2016. I previously supported Dan for Davis City Council and have worked closely with him since that time. I am particularly impressed by his ability to work collaboratively with diverse interests to solve complex problems and advance community interests.”

He clarifies, “My endorsement of Dan should not be viewed as a rejection of others. We are fortunate to have several qualified candidates for the Assembly.”

Supervisor Provenza concludes, “I believe that Dan will be an exemplary legislator. He has promoted smart economic development, education, environmental conservation and support for families. Dan will promote these same values as our representative in the California Assembly. I am proud to support him.”

In a newspaper article, the paper has an obligation to objectively report the news. Certainly the announcement of two supervisors supporting Dan Wolk over their colleague is newsworthy. Such a commentary might be fair game on the editorial page, but has no place on the front page of a newspaper.

Along the same lines, a supporter of Dan Wolk pulled out Don Saylor’s 2014 endorsement of Dan Wolk for Assembly.

Supervisor Saylor went well beyond a simple one line endorsement stating, “I do not take lightly the decision to support a candidate in this election.”

Among other things, he added, “I believe that Dan Wolk is well prepared to represent the diverse perspectives of the 4th District and is the right fit for us. I admire Dan’s lifelong commitment to public service and his approach to governance. He has deep professional and elected office experience at both the county and city levels in issues that have statewide significance and that are critical to the residents of the 4th Assembly District.”

Mr. Saylor wrote, “No other candidate brings both city and county experience to the table; but there is more. Dan Wolk has been an active leader in supporting strong public schools for all children and he worked as a legal services attorney helping the most unfortunate among us.”

Those are strong words, but none of those words negate Mr. Saylor’s own run for the Assembly two weeks later. Indeed, Don Saylor brings far more extensive experience in the city and county than Dan Wolk does, having served for six years on the city council (to Wolk’s 4) and four years on the board of supervisors in addition to eight years on the school board.

There is little doubt that Don Saylor holds Dan Wolk in high regard, but the 2014 words of Don Saylor are now out of context for the current election.

This is an unusual race in that, in a lot of ways, this is a match up of long-time allies. At a city-county two-by-two last year, Dan Wolk was very praising of the work of Don Saylor on county issues.

It will be interesting to see which way this election goes – sometimes similarities breed contempt. The fact that the two often supported each other, for elected office in the past, may well mean the turf battle will be narrow or fierce.

The biggest difference between the two may well be less on policy grounds than on experience and style.

The weird thing about this race is that the first punch that was thrown was not by the candidates, but by a headline in the local paper. Fortunately, with Jim Provenza taking the high road, this controversy figures to end quickly.