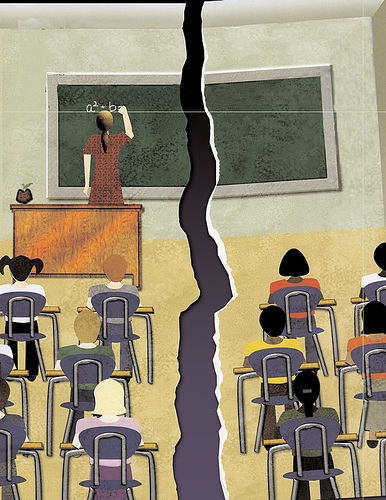 At the June 4th School Board Meeting, a group of researchers who had volunteered to analyze the district’s magnet programs gave a presentation on the AIM program. In their written report, they reported no statistically significant effect of the AIM program on STAR scores for students in the program or out of the program. In their oral presentation, however, they reported a drop in English STAR test scores of approximately 2% (“10 to 15 points” on an 600 point test) and math STAR scores of approximately 3% (“20 points”) for Hispanics who scored at the 95th percentile range on the universally administered OLSAT test.

This finding was nowhere in the written report.  When questioned at the meeting, the researchers clearly stated that the data was not in the materials presented that night.  Moreover, this verbal information was only given for this subgroup and not others.  No information was given about the test scores for AIM identified Hispanics in the AIM program.  To date the supplementary information has not been made available, despite requests. No conclusions can be drawn without this specific data.

Despite the lack of data, according to the Sacramento Bee, the Davis School Board is planning changes to the Davis AIM program in part because “the AIM program has a negative impact on Latino children and the ability of the district to close the achievement gap.”

To blame the AIM program for the achievement gap is unfounded, unfair, and deleterious. Based on this logic, one would conclude that school districts without gifted programs do not have achievement gaps.  Clearly not true.

The achievement gap is a real issue of great importance and is about every child achieving the most they can.  It is not about bringing the top down, it’s about bringing everyone up.  We would not ask one child to kneel or put weights on his/her ankles so that the other children could catch up.  We would try to find a way to help each child stand their tallest and run their fastest.

There is substantial literature that says that minority populations do particularly well in self-contained AIM type classes:

“Homogeneous ability grouping has a moderate positive impact on all high-ability youth (.13), it has a very strong positive effect on high-ability black youth (.32). This powerful effect suggests that we should oppose heterogeneity and support grouping. Also, we found a substantial effect in favor of grouping for high-ability Hispanic youth (.24).” Page, E. & Keith, T., Intellectual Talent (Johns Hopkins University Press, 1996).

Even one of the papers the UCD researchers cited said, “estimates based on test score ranks for the third group [which was grouped based on Achievement rather than on IQ] show significant gains in reading and Math, concentrated among lower-income and black and Hispanic students.” Does Gifted Education Work? For Which Students? David Card and Laura Giuliano (NBER Working Paper No. 20453, September 2014).”

This issue is one I feel very strongly about as a Latina. I feel that our school system should be about helping all children reach their potential.  I came from very humble beginnings being born in Mexico, living in migrant camps and a product of bilingual education. I was the first one in my family to go to college.  I recall a family member discouraging me from attending college because they were afraid it was too hard and I would fail.  I would not be here if it were not for those who saw my potential and believed in me, thus giving me the courage to succeed.

I see AIM as a wonderful opportunity to find and help those underrepresented and possibly underachieving but high potential children who would otherwise not be identified and supported.  This might be their only chance for themselves and their family to break out.  Such opportunities are what make me grateful to be in America and be part of our school system.  Wealthy families can turn to private school or enrichment for their children.  However, for lower income Latinos public school is their only option.  It is our obligation to find these children and help them reach their potential.  I would like to see all children, including Latinos succeed to their highest potential.

District data shows that Latino students are identified for AIM services at nearly the same rate as their representation in the school district, but that fewer Latinos than are identified actually enroll in the program as compared to other ethnic and racial groups.

This finding may be due to the option of Spanish Immersion, and I think there are additional factors. It saddened me when I heard that an AIM identified Latina child was discouraged in enrolling in AIM by her teacher.  I have heard of similar issues at other schools.

I personally know of a very humble Latino family who did not enroll their AIM identified child because of lack of understanding of the program and difficulty navigating the system.  I think these cultural and societal issues are also important to look at.

The achievement gap in the Latino population is not just in Davis, it is a very complex issue that affects America.  Let’s not blame the AIM program.  Let’s bridge the achievement gap by bringing each child up to reach his or her highest potential.

Share:
Tags:Achievement GapAIMDJUSDGATESelf-Contained Program
Previous : A Year After Ferguson, Little Has Changed
Next : My View: Nine Years of the Vanguard from Buzayan to Ferguson

6 thoughts on “Don’t blame the Achievement Gap on AIM”