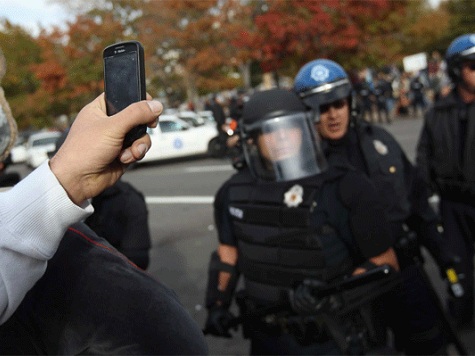 The killing spawned protests, there was a police crackdown, but ultimately the prosecutor was criticized for using a grand jury as the vehicle to determine whether or not to charge the officer with a criminal offense.

Widely supported by a considerable coalition of activists and public interest groups, SB 227 calls for the elimination of use of a criminal grand jury to investigate cases where a member of law enforcement is alleged to have caused the death of a suspect, either by a shooting or by use of excessive force. According to a release from Senator Mitchell’s office, “It has been heralded by many as a necessary step towards restoring accountability and transparency to a system of justice that operates almost entirely outside any kind of meaningful oversight.”

“One doesn’t have to be a lawyer to understand why SB 227 makes sense,” said Senator Mitchell.  “The use of the criminal grand jury process, and the refusal to indict as occurred in Ferguson and other communities of color, has fostered an atmosphere of suspicion that threatens to compromise our justice system.”

A chief criticism of the grand jury process is that criminal grand jury proceedings differ from traditional trials in a variety of ways – they are not adversarial, as no defense attorneys, or judges, participate. There are no cross-examinations of witnesses, or any objections. There is no oversight to how prosecutors explain the law to the jurors and what prosecutors say about the evidence – and the proceedings are secret.

“Communities want a criminal justice system that is transparent and which holds all of the players—law enforcement, prosecutors and judges, accountable when there are civilian deaths resulting from the conduct of officers. Criminal grand juries do neither,” said LaDoris Hazzard Cordell, northern California’s first African-American woman judge, and former San Jose police auditor.

As Judge Cordell notes, “No judges or defense attorneys participate. The rules of evidence do not apply; there are no cross-examinations of witnesses, and there are no objections. How prosecutors explain the law to the jurors and what prosecutors say about the evidence are subject to no oversight. And the proceedings are shrouded in secrecy.”

“In high-profile, controversial cases, where officers use lethal force, prosecutors face a dilemma,” she writes. “If they don’t file charges against officers, they risk the wrath of the community; if they do file charges, they risk the wrath of the police and their powerful unions. By opting for secret grand jury proceedings, prosecutors pass the buck, using grand jurors as pawns for political cover.”

The retired judge added, “I applaud Governor Brown for doing the right thing and sending a message to all Californians that his administration wants our criminal justice system to be fair, transparent and accountable.”

Groups representing communities of color have been especially vocal in their support of bills designed to bring greater transparency to law enforcement operations and justice proceedings.

Under California law, all felony cases which go to a trial by jury must first undergo a screening process consisting of either a “preliminary examination” or an “indictment” by a grand jury. The choice as to which route is taken is up to the prosecutor alone. SB 227 is supported by the CA chapter of the NAACP, the CA Alliance of Boys and Men of Color, the Mexican American Legal Defense and Education Fund, among others.

The Vanguard spoke with Senator Mitchell back in February of this year. She said at the time that the bill was not specifically about Ferguson or Staten Island.

“I am not drawing a direct correlation to those events,” she said. But she added, “I think those events have caused everyone across the country to look deeper into their systems in their own states to really figure out what the process is.”

As a policymaker, she is looking to “rebuild the sense of confidence and trust between my constituents and their expectation around the judicial process that protects them in the event a cop has used excessive force.”

Senator Mitchell said, “As I looked more deeply into the grand jury system, particularly criminal grand juries, I talked to constituents, I realized it is such a kind of black hole. People don’t generally understand the difference between a grand jury and a regular jury trial.”

“It really lacks transparency,” she added.

However, the California District Attorneys Association and the California Police Chiefs Association opposed the ban.  They argued instead that the grand jury should be preserved as an option, and that by imposing a blanket prohibition, it would discriminate against police officers based on occupation.

Also on Tuesday, Governor Jerry Brown signed Senate Bill 411 by Senator Ricardo Lara to clarify that civilians’ right to record public safety officers in California is permissible under the law. Known as the “Right to Record Act,” SB 411 has received bipartisan support as it advanced through the legislature and onto the governor’s desk.

“Today, California makes it unequivocal – you have the right to record,” said Senator Lara. “With the stroke of a pen, Governor Brown reinforces our First Amendment right and ensures transparency, accountability and justice for all Californians. At a time when cell phone and video footage is helping steer important national civil rights conversations, passage of the Right to Record Act sets an example for the rest of the nation to follow.”

SB 411 clarifies individuals’ First Amendment right to record police officers by stating that a civilian recording while an officer is in a public place, or the person recording is in a place he or she has the right to be, is not violating the law. Additionally, it makes clear that recording does not constitute reasonable suspicion to detain a person or probable cause to arrest. This bill also protects police by ensuring that these provisions do not allow a civilian to obstruct an officer.

“This law makes it crystal clear that a person who photographs or video records a public officer or police officer, in a public place, and does not physically interfere with that officer, is not committing a crime and is not subject to detention or arrest,” said Susan Israel of the California Public Defenders Association Legislative Committee Member.  “It is the embodiment of protections guaranteed by the First Amendment to the United States Constitution. We applaud Governor Brown’s signature on this measure at this crucial time in our nation’s history.”

“CACJ is proud to co-sponsor this timely legislation. Following various high profile incidents across the country, it is essential for the community to hold the police accountable without fear of being intimidated or arrested,” added Dennis Garcia of the California Attorneys for Criminal Justice.

Larry Doyle, from the Conference of California Bar Associations, stated, “SB 411 reaffirms the right of citizens to record the official actions of law enforcement in a reasonable, non-interfering manner.  This protects the public from misconduct and excess by law enforcement, and also protects good police officers who could otherwise have their careers and reputations damaged by untrue allegations of misconduct.  It is a win-win for justice.”

In California and beyond, members of the public have been arrested while recording or photographing police activity in public places.

News accounts and videos have surfaced showing that some civilians have been arrested for recording officers in the cities of Los Angeles, Torrance, and San Diego, as well as in the County of Orange. This conflict extends past police officers and civilians to professional photographers and media personnel.

In Berkeley, CA, a journalist was arrested after recording law enforcement officers in a public place. Last week, a bystander caught on video a police officer in North Charleston, SC, in a shooting incident that has led to charges being filed against that officer.