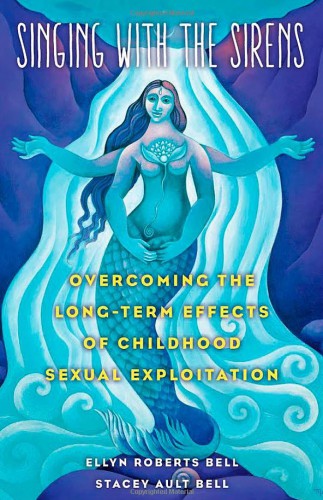 On Friday, September 25 at 7:30 pm, Ellyn Bell and Stacey Bell return to Davis and will be confronting the issue of childhood sexual assault with a book signing and talk about their latest book, “Singing with the Sirens: Overcoming the Long-Term Effects of Childhood Sexual Exploitation.”

Ellyn Bell told the Vanguard that their book began in 2011 from work that they had done with girls in the juvenile justice system, with whom they had been working for a couple of years on Friday nights, meeting with groups.

Following these sessions they would debrief and discuss the stories they heard, “and we realized the common themes of these stories.” She also had become aware of so many stories of kids they had worked with through the school district and working with at-risk youth. She said, “We started talking about our own experiences and said that ‘we really need to write this.’”

But she wanted something “positive” and “something really about the healing journey that we are trying to help people embark upon.” She said that is how this came to be started and they wanted to write an anonymous story rather than focusing on anyone’s story in particular. In creating the story, they combined youth stories with adults, and added in the use of myth and metaphor to talk about this healing journey from childhood exploitation and abuse.

They set forth chapters and took turns writing and swapping chapters. The book itself was a journey in itself which took a couple of years.

“There are a lot of memoirs on the subject, we didn’t want to write that kind of book. We wanted to have something that was a little more uplifting,” she said. She wanted “people to figure out how to become the heroine of your life. How do you find the voice that may have been silenced in childhood.”

“Healing is not really ever a place that we get to completely, but it’s a constant journey in life,” she said.

Both Ellyn Bell and Stacey Bell are survivors of childhood sexual exploitation. They both are social workers by training. They have done years of work in this. Stacey Bell is the director of Youth Development for CPS. Ellyn Bell has worked in domestic violence and sexual assault.

She said she works with at-risk kids and has done work with those who have been the victims of childhood sexual assault. “It’s been our life work,” she said. They saw this as a project that could help others along their journey.

“It can be utilized in a number of ways,” she explained. “The kind of information in the book is applicable to women’s studies, sociology and also helpful to clinicians.” She said that a number of clinicians have looked at their book and believe it would be helpful to their work. “But also a number of survivors reading it – the feedback has been that it’s very empowering. That was the intent.”

On Thursday, they will be doing a book signing. This event is set up in a more public place than perhaps the typical book signing at a bookstore. There will be music, readings, and discussion and answering questions on the book.

She noted that there is a lot of discussion these days on the issue of human trafficking. She said, “It’s not just as simple as saying that people who have endured some form of child exploitation are going to wind up in the sex industry as adults – sometimes it happens, sometimes it doesn’t. We kind of unpack a lot of all that information in the book. I think it’s very relevant for those topics today.”

Ellyn Bell has worked as an organizational leader with at-risk and marginalized youth and addressing violence against women and children for 20 years. Her personal experiences as a youth informed her career choices.

According to her bio, “She was most recently, the Executive Director of the SAGE Project in San Francisco, one of the first peer-led organizations in the country to work with human trafficking and commercially exploited youth and adults. She holds a Master’s Degree in Religion, with an emphasis in Theology. She also received her social work license in the State of Iowa. Ellyn is also a yoga teacher and a trained dancer. She is mother to two wonderful people who are now extraordinary young adults.”

Stacey Bell was born and raised in the United Kingdom. After suffering abuse as a child, she immigrated to the US at the age of sixteen and became exposed to exploitation and other traumas.

According to her bio, “Today, Stacey serves young people as the Youth Development Director for an urban school district in Northern California. She has a Masters in Social Work and is in the process of completing her doctorate in International Multicultural Education with an emphasis in Human Rights Education. First and foremost, Stacey is a mother, both to her biological children, as well as all the babies she has mothered, mentored, and supported over the years. She is a partner at Bella Invictus with Ellyn Bell.”

Again, the event with be Thursday, July 30 at 6:30 PM at the Davis Odd Fellows Hall.