There has been a lot made about process in the issue of AIM program changes. From the start to the end of the meeting last night, the process has been baffling to me as an observer. It has been three and a half months since the board first cast their vote on June 4 to bring back the superintendent’s report on changes to the AIM program.

Every board member made it a point to praise the superintendent for his work to bring this item forth and, indeed, the superintendent deserves credit for the condensed timeline. And yet, as many in the public pointed out, that was achieved at a great expense of short-circuiting some process.

Board Member Madhavi Sunder noted that there were places where the board agrees. They agreed on the elimination of private testing – although the point was raised that if the board allows transferring students to take a test, the elimination of that might not produce the reduction in the program some might think.

She also noted that the board is committed to a streamlined process for identification, which includes an array of tests.

The superintendent issued a statement immediately following the meeting. Superintendent Winfred Roberson said, “This evening the administration put forward our recommendation for the best way to appropriately identify students for our AIM program.  I am confident that there is agreement among our community to meet students where they are as well as to the importance of  effective differentiation.  We look forward to continuing this discussion on October 15.”

Indeed, the Superintendent’s position on differentiation is one of those areas where I came away somewhat perplexed. He told the board that “differentiation is a philosophy, not a program.” He really could not specify to the board how it is expected to work.

Members of the public who spoke, including educators and former board members, worried that differentiated instruction could not work in class sizes of 30. Many argued we needed to cut classes by one-third, down to 20, in order to make it work.

On the other hand, the superintendent did address one perplexing issue for me. Many of the advocates for change believe that the AIM program should be for those student who are gifted but who underachieve in the mainstream classroom. High achieving students, they believe, would be better served through differentiated instruction.

However, the program that is set up does not attempt to distinguish between high achievers and gifted students. Instead it creates a bright line for 98th percentile achievement on the OLSAT (Otis-Lennon School Ability Test). Everyone who achieves at least the 98th percentile would make the program, and those who do not might have an alternative route in through some form of retesting – where again they would have to achieve at the 98th percentile.

Those who have been reading my thoughts understand that I remain concerned that, given the limitations of the OLSAT, minority and underserved students might be underrepresented in this process.

The district is attempting to avoid this problem, first by looking into risk factors and re-testing students through tests like the Naglieri Nonverbal Ability Test and the TONI (Test of Nonverbal Intelligence). I am disappointed that the superintendent never attempted to address my question on the projected racial and ethnic breakdown of the AIM population under this proposal.

“Our AIM program is among the most diverse of the district’s programs,” Madhavi Sunder told the superintendent. She noted her concern about the HOPE (Having Opportunities Promotes Excellence) Scale, stating that, a decade ago, Jann Murray-Garcia had found that the teacher identification process at the time was not identifying enough minority students. “How can HOPE scale get around problems of implicit bias?” she asked.

Winfred Roberson said that we are looking to apply the appropriate test for students.

Ms. Sunder continued, “Are we going to give additional training on implicit bias?”

Mr. Roberson stated that the reason we selected the HOPE scale is it begins to mitigate for the biases. Clark Bryant added that the research is clear that getting the teacher input is vital in the process and the structure hopes to mitigate bias.

Another question that people asked was about the lottery and whether this plan will eliminate the need for the lottery. Superintendent Roberson stated that he hoped they will not need it, but they are not going to eliminate it. If there is more demand for the program and more students qualify for it than there is capacity, the lottery would be used.

Alan Fernandes said, “The existence of the lottery in my view seems to suggest that for those are unsuccessful in the lottery, we’re not meeting a need.” He said this “suggests that there are some people whose needs are not being met.”

Superintendent Roberson tried to sideswipe it, saying that “it means we don’t have enough seats.”

But Mr. Fernandes pushed the point, “For people who want to be in the program… For those who are unsuccessful in the lottery aren’t able to be in those classrooms that we believe are best suited for them.”

Mr. Roberson continued, “Having the lottery shows me there’s more demand for the program than we have seats.” And he acknowledged that it was, in Mr. Fernandes’ words, “a laudable goal to no longer have a lottery.”

That leads to what I see as the core and irreconcilable issue: the 98th percentile. 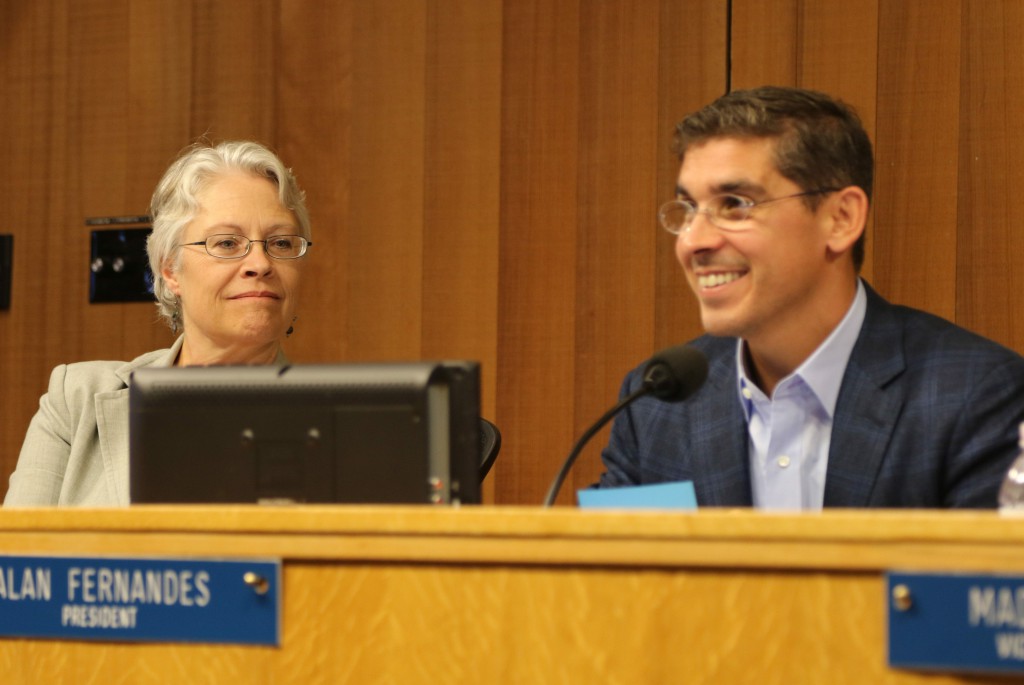 As I drove home last night following some text message exchanges and conversations in the parking lot, I came to the realization that the one issue that I was hung up about was the issue of the 98th percentile cutoff.

As Madhavi Sunder put it, “It looks as though this proposal seriously limits access to the self-contained program.” She asked for the educational or other rationale for raising the cutoff score to 98.

Superintendent Roberson would respond that they didn’t know the rationale for the 96th percentile score either. His report acknowledges that the scores in other districts range from 90 to 99 across communities. He reiterated that this was based on a number of conversations and he even acknowledged, “We are not married to that number.”

This is an issue that opponents of the proposal pounded away at all night long. The district seems inevitably to be moving toward a change that will cut the size of the program in half without having any educational basis for it whatsoever.

For me, I understand the desire and the need for changing key parts of the process that seem broken. Private testing is a way that people with resources can circumvent the identification process. Moreover, Tobin White in his report showed real concerns about an over-reliance on the TONI. I completely support those changes.

The one area that I just leave with my head shaking is the lack of an educational rationale for raising the qualification and shrinking the program size to 63 to 73.

As Eric Hays, a parent, put it, “Why has the district moved to raise the qualification from something that was already above the average of that scale?” He noted the lack of rationale for that change and called it deeply suspicious that one school board member said that “I support AIM, just smaller.”

As another parent noted, her daughter had ADHD and struggled in the mainstream classroom. She was given the WISC (Wechsler Intelligence Scale for Children) test, and now that she is in AIM, she is doing fantastically. She didn’t made a point of this, but her daughter had scored 97 on the WISC, and that means that under this proposal she actually never would have been admitted to the AIM program.

So here we have – albeit anecdotally – a case where someone who struggled in the mainstream classroom is doing well in AIM currently, but under this proposal, she would not have qualified for AIM having scored 97 on the secondary test.

Board President Alan Fernandes, perhaps looking for a middle ground, suggested to the board that they phase in the program over time to avoid the drastic changes. The board, at the late hour it was, was agreeable to having staff come back to propose an alternative timeline. From the conversation I am not convinced the votes are there to support it, although I was heartened to hear from Tom Adams some concern about going up to 98 percent and the equity of that.

I think there are a lot of improvements that this program offers with some tweaks, but the 98th percentile qualification issue and the reduction in program size without true educational reasoning leave me shaking my head.

If the board sees a phase in as a way forward, I suggest they start by just assessing a baseline change of elimination of the private testing with the new two-stage process, and assess where they are in terms of numbers and ethnic mix.

But I believe there are probably three and maybe four votes to go forward with full implementation this program. I just wonder what the true educational benefit is of that – and what the harm is to implement all of the changes everyone agrees with first, then take stock of where we are.

I guess I really do not understand what is driving the need to shrink the program in half if the other issues are fixed.

53 thoughts on “Commentary: Does District Really Need to Cut AIM Program in Half?”