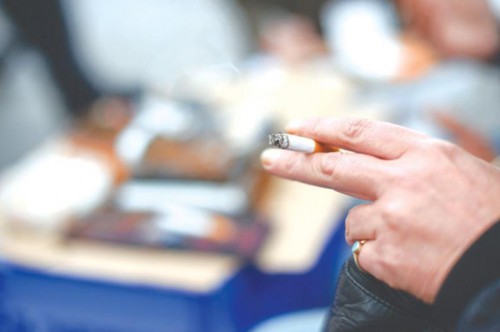 The city of Davis has long had a comprehensive no-smoking ordinance in place. Smoking is already not allowed in most publicly accessible spaces – not just in all indoor public establishments, which has become the norm in California and many other places in the country.

Smoking is also prohibited at public events including sports events, entertainment, speaking performances, ceremonies, pageants and fairs. It is prohibited in entrances and exits to enclosed public areas, the entryway of any enclosed public area, stairways, courtyards, areas not open to the sky, any place with food or drink offered, and children’s play areas, among others.

But should the city go further? This week, they are introducing an ordinance that would for the first time ban smoking in public areas that are open air – public parks and greenbelts, open spaces in the city used for passive or active recreation, and E Street Plaza in downtown Davis.

This meets the council objective of “Safe and Healthy Communities: pursue and promote policies that promote and encourage healthy lifestyles.”

As city staff notes, “The detrimental effects of smoking are well-documented, as are the hazards posed by secondhand smoke. The United States Surgeon General, the California Legislature and the California Health and Safety Code find that tobacco smoke is a hazard to the health of the general public and involuntary smoking is a cause of disease, including lung cancer, in healthy nonsmokers.”

But that point is not in question. There is a more serious and probably unintended impact. When we talk about banning smoking in public parks, greenbelts, publicly owned spaces and the E Street Plaza – are we effectively targeting homeless people who use those spots, at least during the day, to sit and occupy? Are we effectively trying to ban homelessness in the city through this ordinance? Or if we are not doing so intentionally – are we not at the very least doing is as an unintended consequence?

We need to think longer and harder about the consequence of this initiative. A lot of people are clearly sensitive to smoke and it can be a nuisance to be walking in a public area around someone smoking. But parks and greenbelts are big open expanses. Smokers in most cases are easily avoidable. There are already laws that prohibit smoking near playgrounds (children’s play areas).

So the first question I think we should ask here is whether there is really an unavoidable public nuisance that this thing is addressing. Or can we accomplish the same intent of keeping smokers away from non-smokers or people allergic to smoke, without outright bans?

Secondly, the council is pushing this under the guise of a public health risk. So let us unpack this. Clearly the smoker is incurring their own mitigated risk. The homeless population is heavily comprised of a various levels of substance abusers. A ban in certain areas will simply force people away from the open areas and toward either more secluded areas or other areas where smoking is still permitted.

Third, what is the enforcement mechanism here? Are we really looking to subject a bunch of homeless people to fines? That sounds increasingly like the complaint in places like Ferguson. Is it really the right thing to impose fines on a bunch of addicts who are impoverished?

Fourth, the resolution states, “The City Council hereby declares that prohibiting smoking in the City’s public parks, greenbelts, plazas and open spaces is necessary to protect the health, safety and welfare of residents and visitors within the City by limiting their exposure to involuntary secondhand smoke.”

Is this assertion backed by health studies? That there is a health and safety risk to people in an open air park exposed to secondhand smoke and that this an unavoidable risk?

But to me this current proposal goes so much further. It has the effect of targeting homeless people. Yes, we all understand that smoking is harmful, but banning smoking in more and more public areas is not going to stop homeless people from smoking – it will simply target them with fines and harassment by law enforcement.

I do not see a stated clear public health justification for this law, and the unintended consequences seem to outweigh any benefit we receive.

I urge the city council to think clearly about the consequences of this ordinance before they pass it.