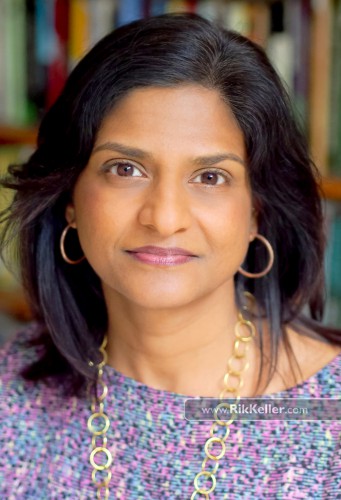 The Vanguard will be publishing the comments of each of the five school board members on the AIM program. We began with the comments of Susan Lovenburg on Sunday and Barbara Archer on Monday. Today we cover what Madhavi Sunder said. Below is a video clip from her comments.

My first question here is what’s the educational goal of this proposal. I feel that frankly until tonight, I as a trustee who works with you and the public hadn’t had the opportunity to hear – Susan, you made the motion on June 4, hear from you, thank you for sharing your vision with us tonight – but we didn’t hear from you with respect to what your educational goals, what your vision was underlying that motion that four of my colleagues passed on June 4, that set in motion a process where four of our top administrators spent their entire summer working on this issue.

Trustee Archer said, why didn’t you work on the achievement gap? Well you didn’t work on anything else or at least you couldn’t conceivably have worked on a lot more than this because this board asked you to work on this – and it took a lot of your time because you were under a time constraint to do it.

So my concern is what is the educational goal? This board, when we set in motion an investigation to look at changing the start time in our schools, we said there is a strong recommendation from the most respected pediatric association in this country – the American Academy of Pediatrics – that says this is in the best interest of children.

Rather I heard that having the program seems to be driven more by political concerns rather than educational concerns or financial reasons.

As one speaker pointed out, the AIM program costs something like $30 a student right now. So I’m not hearing either educational or fiscal concerns underlying this and it seems to be much more politically motivated.

I want to respectfully disagree with my colleague Alan Fernandes, because Alan you said that this proposal is only about identification – I don’t think that that’s true. This proposal goes much further than that because what you’re projecting is that half of the children in this program currently would have to go back to the regular program.

So, Alan, against – with all due respect, this is a major change because this has been a district of choice. Parents make the decisions ultimately about what is in the best educational interest and social and emotional interest of their children.

They make the first choice to come to this district because we offer this array of choices. The array of choices serves many purposes. One, it recognizes that learning differences exist. The kids learn about this. All of the latest best practices recognize differences in learning styles, but (also) it recognizes that people have different philosophies, we’re a diverse country, we’re a diverse community in Davis and to have trustees limit those choices is really a radical change – so that’s where I disagree with you, Alan.

This community for years and years, many many years has supported parent choice. This board, Susan, the board you sat on, has repeatedly expanded the Montessori program, expanded the Chavez Program, it’s a demand-driven district.

So the question we have to ask is – is that over? Is this a new day in the DJUSD where we’re saying parents you need to go back to your neighborhood classroom because we think that’s in the best educational interest or the district, of your child? So I think there’s a lot at stake here.

It’s about, one, parents demanding evidence-based decisions, not faith-based decisions. It’s about preserving that hallmark of choice that makes our DJUSD such a strong district.

Fifty percent is a huge cut – imagine slashing our budget 50 percent. This is not something that the community is not going to feel strongly. So we need to take this much more slowly. We need to have evidence underlying why we’re making these recommendations. Why 98, why not 96? Why no longer give parents that choice that we have given them for years and years? And that the boards of the past have supported.

The boards have supported choice, that’s why we have a demand-driven, choice-driven district. Why the rush? Why are we even talking about doing our investigation within the next month.

Mr. Superintendent, I’m sorry, you have been operating without a GATE coordinator since June. It’s because of the board. The board created that problem – I think we have to fix it. But because you need help – which I think you definitely do – we shouldn’t be forced to make large programmatic decisions that change options for so many students and families, but also really change the tenor of who we are as a district.

So I’m really concerned about that. Also the faster we move, junior high – this study doesn’t even discuss junior high, but if you shrink the number of kids who are in the elementary school program – are we going to say you can only take self-contained AIM classes in junior high if you have a 98 percent or higher without having an honors option? So now, so many fewer junior high kids are going to (have) options for appropriate academic programs – we have to address the junior high part of this.

Maybe it means bring back honors – we used to have AIM and honors and regular ed in the junior high – maybe we bring that back, but let’s look at it. Processes matter because they engender trust, because you get a better product. That’s our goal here – the best product, the best program for our kids.

I think we have to slow things down.

I do want to talk about places where I think we agree. I feel like we agree on private testing – that we should not have inequitable access to this program, but we need to implement that change with common sense. As former trustee Joan Sallee suggested – that means if kids are not in the country and they miss the test, are we going to allow for a private test? Yes, we’ll allow for a private test.

When kids move into the district – when we look at those numbers of the number of kids who are qualifying with the private test, many of them from out of the district. They weren’t here for the universal testing and other testing opportunities in third grade. Some have learning disabilities and don’t otherwise qualify for in-district testing.

It may be, frankly, that without private testing we should be catching more kids. Because it’s not going to be driven by money and who has the money to get the testing? So I think we need to think more seriously about what the impact is of not having private testing – but that is something I think we all agree on and I am confident that we all work together to create a better system with respect to that.

I think we all agree that we want to have the best possible cocktail of tests… We all agree we want the best testing options for this program. I so appreciate all of your efforts this summer – that was detailed research, I think we have questions about it, I think we want to make sure we get it right. But I think you really moved the ball forward in an important way and so I think we’re committed to getting that array of tests right.

Another place I think we’re all in agreement is the need to meet every kid where they are and the need to put more of our will and effort and commitment as a district into differentiated instruction in the regular classroom. I don’t know that we have much in the way of financial resources – Susan you mentioned it, and I want to know more about it because you may know where the money is and I don’t – but I don’t know that we have the financial resources to reduce class size even by one student.

It costs half a million to a million dollars to reduce class size by one student. Assistant Superintendent (Matt) Best, tell me if I’m wrong on those numbers, but they’re pretty high numbers… They’re high like that, they’re half a million to reduce… but if you guys are telling me it’s a lot cheaper, then it’s great to hear and we should do it.

That’s amazing and that’s the kind of district we have. I think we can do it, I would like to see us talk to principals and teachers to see how can we differentiate even in just math in this coming year.

(Assistant) Superintendent (Clark) Bryant, you initiated and oversaw a push-in program for all third graders with respect to reading. Maybe we could do it that way where we pay for aids to go into the classroom so teachers could actually have two to three levels of math within their classroom. I think there are some creative ways we can do it, but I want concrete suggestions.

I want something that is real that we can build together and then let parents choose. If it works, they will come. If it works they will not go to a school across town. If it works, they’re going to stay with their friends. But at the end of the day, it’s up to the child and the parent together to decide what works best for them.

I keep hearing that this change is for the future, it doesn’t affect the kids in the program. That’s just not true. The kids in the program have already been affected without a GATE coordinator. Vocabulary books that were always ordered by the GATE coordinator were not ordered this year. Kids were doing last year’s vocabulary and not moving forward.

So there were instructional decisions that were made with the old GATE coordinator, and people in the current program are already feeling the effects.

The leadership structure – I agree with President Fernandes that we’re getting it backwards – we need to know what our program is before we restructure the leaderships.

I think a lot of folks are talking about the tenor of the discourse and one thing I’m hearing a lot is people not assuming that other folks have best intent. Heidi Perry, the rockstar principal at Willet where my son’s an elementary school student, has a sign – assume best intent – on her office wall. I think we need to be doing more of that. I think we need to be keeping people first as one of the speakers said today.

And if we see that any child is suffering and not growing in any program – we should be working on that together and caring about that as a community, even if that’s not our child. That’s the kind of spirit of collaboration and caring and compassion that I want to see in our district. And I want to see us help lead that.

44 thoughts on “In Their Own Words: Madhavi Sunder”