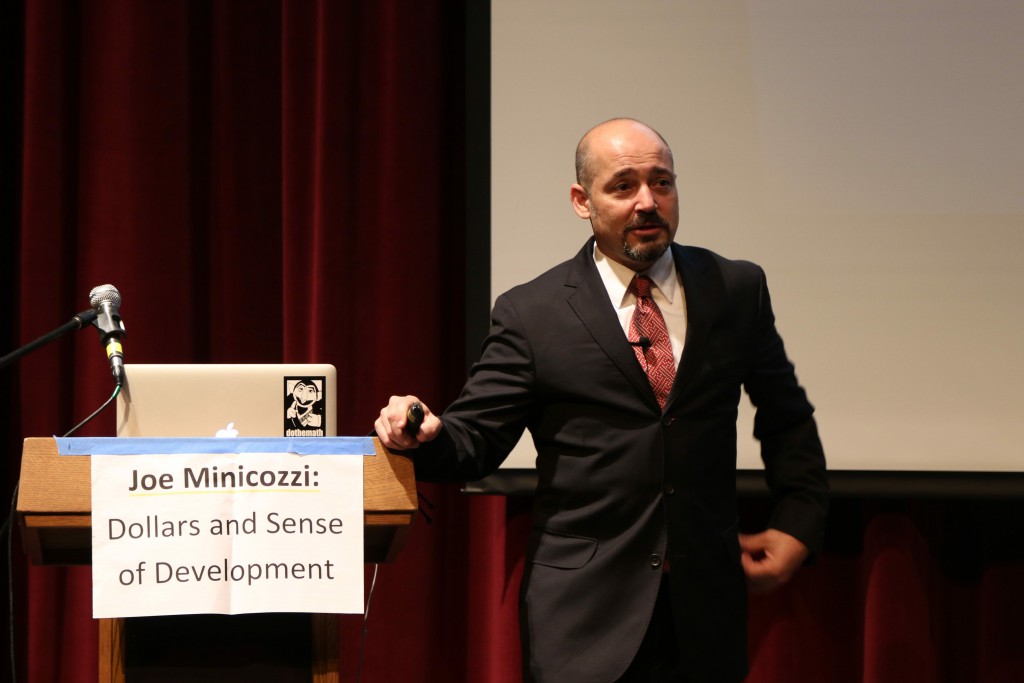 Before a large crowd at the Veteran’s Memorial Theater, Joe Minicozzi came to Davis yesterday to do two talks in a program called “Dollars and Sense.” One of his central points was to show how land use policies generally create inefficient uses of land. One of the starker models he demonstrated is that, downtown, mixed-use land produces far more revenue per acre than the types of economic uses many communities promote, in particular big box and malls.

“We don’t measure our cars on a miles per tank basis do we?” Mr. Minicozzi asked. Among other things he is the principal of Urban3, LLC, a consulting company of downtown Asheville, North Carolina, real estate developer Public Interest Projects. Mr. Minicozzi showed how poor fiscal and land management practices harmed Asheville and how just modest reinvestment in existing buildings was able to help that community recover from decades of debt and under-utilized space.

He said it’s silly to think about miles per tank, and yet that is what we are doing for land efficiency. “If we’re doing this for gasoline, why aren’t we doing it for land?”

He showed the mix of uses on that acre of land that provides the wealth and tax for the local government. What he does is attempt to do what he calls “an economic MRI,” or mapping the impact of the land uses on municipal or county funds. 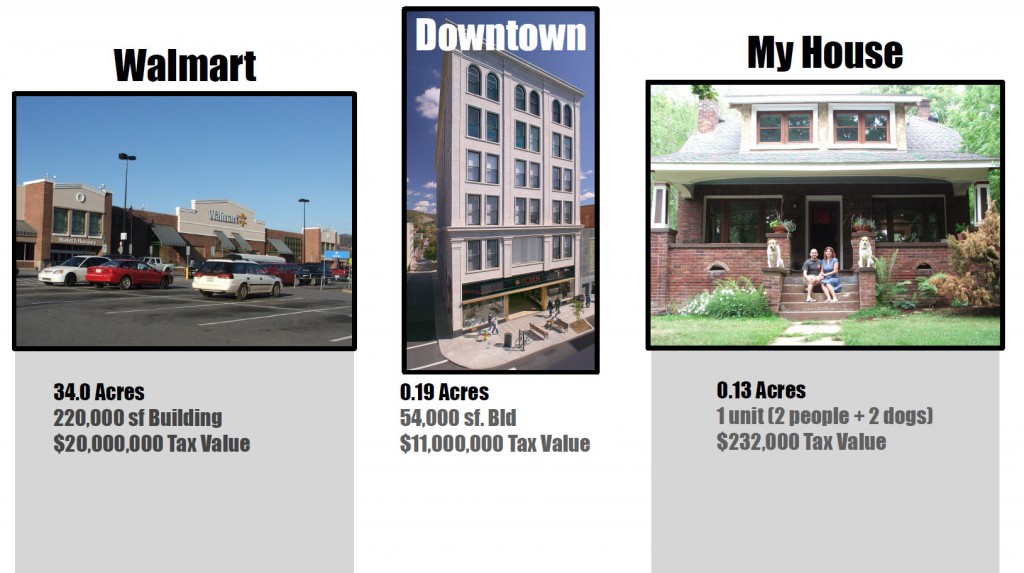 Joe Minicozzi shows in his own county near Asheville a map where there is a huge estate that is worth $75 million, but it’s 8000 acres. That, he says, is miles per tank. If you look at value per acre, on the other hand, the map changes. The most valuable land in terms of value per acre is in downtown Asheville.

He showed a map they had developed of Sonoma County, where each of the relatively self-contained cities had its own unique signature. He pointed out, “You can see the decisions of Rohnert Park where they decided to go with an economic model that was mostly based off of big box stuff off the highway and they have this very low level of development as opposed to those that actually cultivate their downtown.”

“These are all political choices that had an economic effect,” he explained. 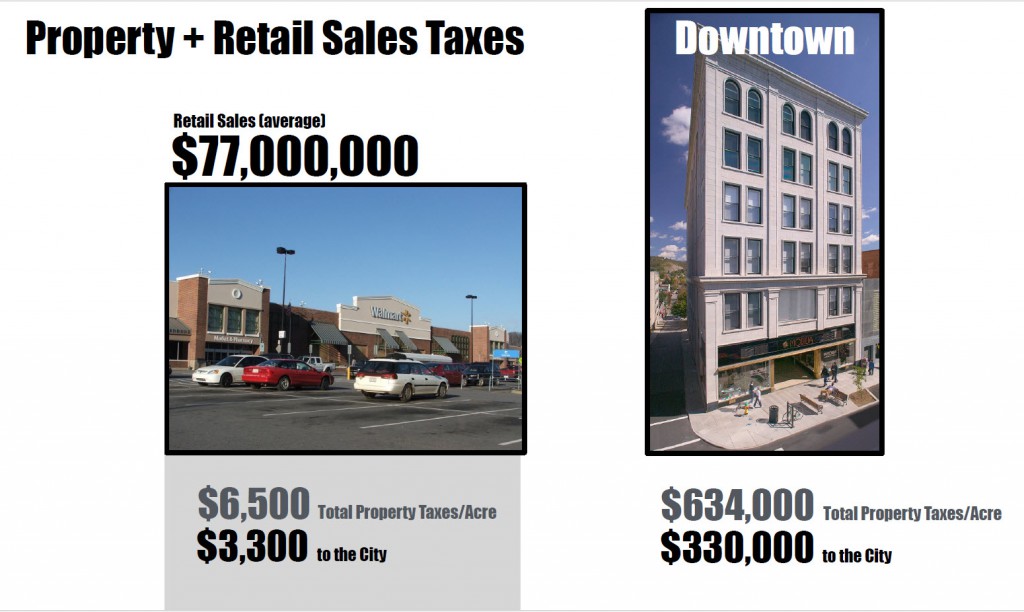 The tax system, he explained, works like this: “The cheaper the building, the bigger the site, the lower the taxes.” He said, “There’s a perverse incentive for me as a developer to build junk in your community, to build real cheap buildings and squander as much real estate as possible with your taxes.”

Joe Minicozzi graphically demonstrated that even 100-year-old buildings are often more efficient tax generators for the city than a mall.  “Allow your biases to just melt away to see the data that’s out there,” he said, as he showed that even affordable housing projects can be more efficient revenue generators than malls.

He looked at what new development is creating. As he said, there are incentives to chase that new building because it produces the tax value on the record today under Prop. 13 as opposed to older buildings that are trapped in time, frozen at their initial value under Prop. 13.

Mr. Minicozzi presented this data, showing the inefficiency of Walmart at a presentation, and he explained to a representative from Walmart, “I don’t have a problem with what you do, you’re actually showing us the failure of our own policies. I don’t hate the player, I hate the game.”

Mr. Minicozzi described the presentation from the Walmart representative who sat up there with PowerPoints and spreadsheets “about how cheap his building were.” He’s talking to an audience filled with assessors from all over the country. “Look at how cheap our buildings are.” He said, “We make the cheapest buildings possible.” 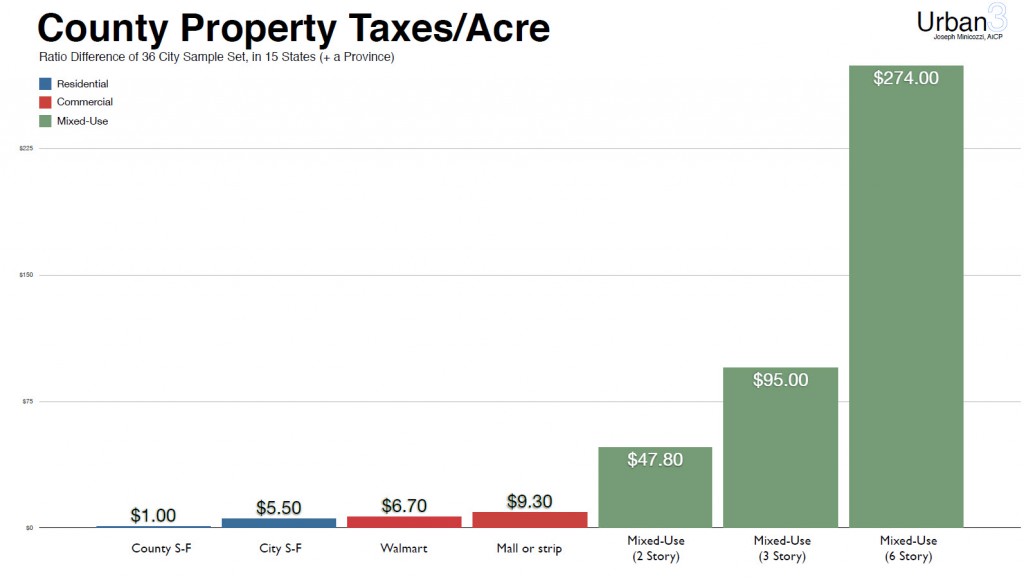 He said, in one sense, this guy is brilliant – “he’s efficiently driving down his tax roll in every single building across the entire nation and world in one meeting. That’s efficient.”

On the other hand, he said, it broke his heart to hear the guy say “we’re going to pay as low taxes as possible in your community.”

“Again, I don’t hate the player, I hate the game,” he explained. “These are your policies in action and how people take advantage of them. You just have to be aware of it.”

He showed in Santa Rosa where the Walmart stands in terms of revenue versus a 100-year-old home. He pointed out, here’s a home that’s a 100 years old still producing value and here’s a building that will be gone in 15. 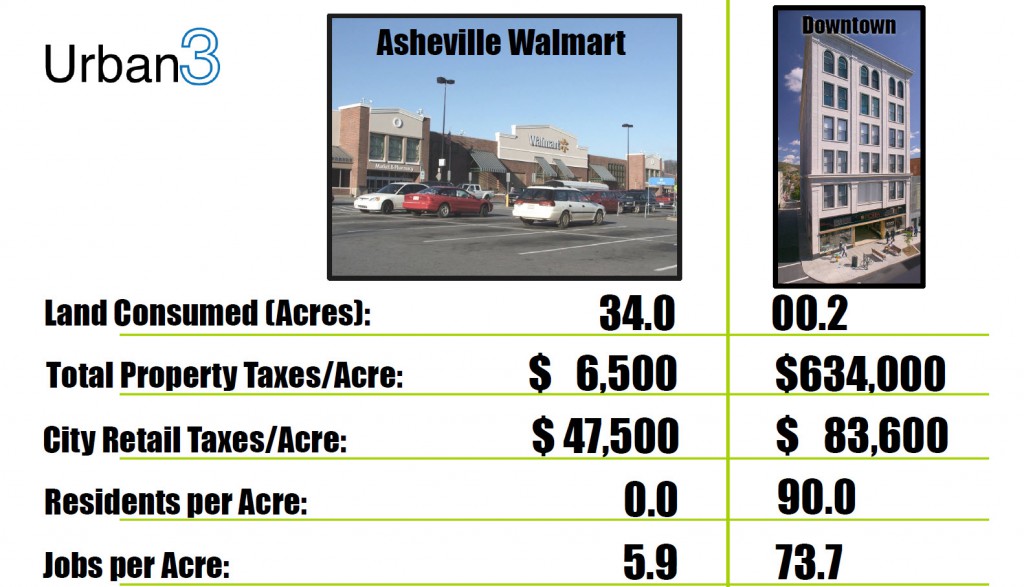 “Realize what’s producing the wealth in your community,” he said. “And realize there’s a perverse incentive not to do that.”

As he pointed out again, “Let your biases go and just look at the data.” He compared this analysis to Moneyball. He said, “It’s a business book parading as a baseball book.”

Michael Lewis, a trained business writer, was fascinated by the fact that the Oakland A’s were the cheapest team in baseball and yet were very competitive. “In interviewing the manager, he realized that they were just using a different analytic.”

A key factor, Mr. Minicozzi explained, is that the A’s drafted “walkers.” “Has anyone seen the highlight reel on ESPN of someone taking a walk? That’s not a heroic thing in baseball,” he said. They let their biases go, “they weren’t looking for home runs. You’re statistically more likely to get to home plate from first base than home plate.” 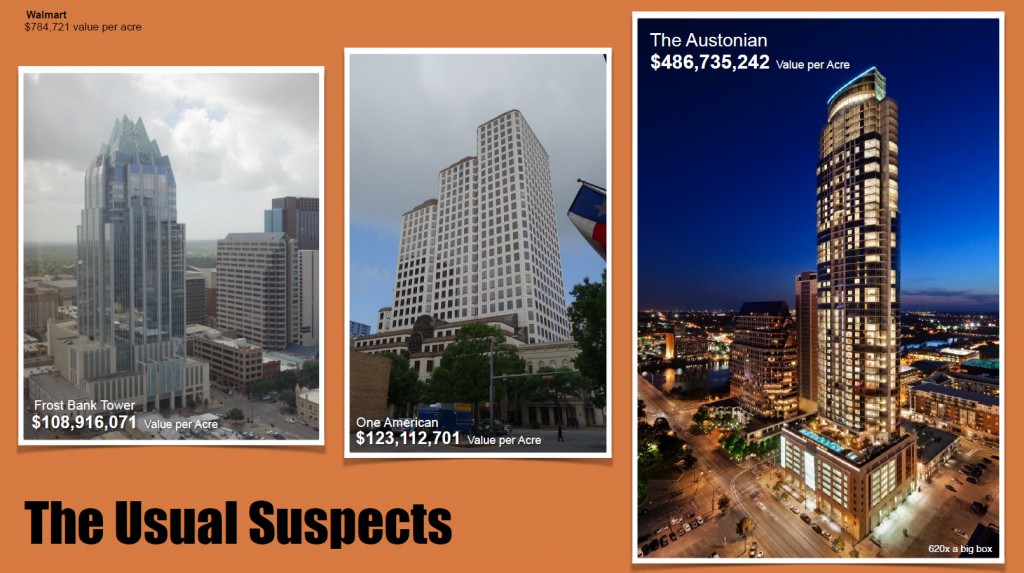 He showed a home district with no big name retail producing more than the mall that has Macy’s, Target and a Whole Foods Market.

“We see this all over the place,” he said.

Tomorrow we will have his brief discussion of Davis and coverage of the panel discussion.

Share:
Tags:Big BoxDensityDowntownEconomic DevelopmentJoe Minicozziland use
Previous : Commentary: The Rush to Do Something, Anything
Next : Character Witnesses Attempt to Bolster Defense Case in Woodland Murder Trial