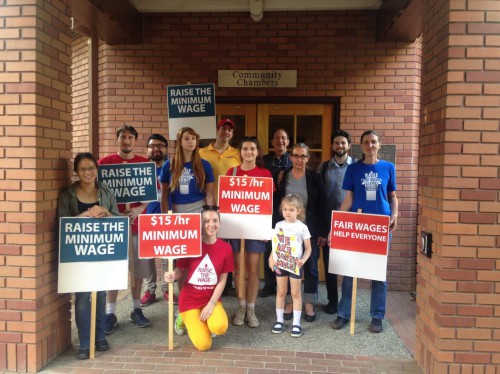 This past week, the task force appointed by Sacramento’s Mayor Kevin Johnson made the recommendation that the minimum wage be raised to $12.50 an hour by 2020.   This is significantly lower than minimum wage increases in Los Angeles and San Francisco that will be phased in over five years to take them to $15 an hour – the goal of many activists.

Adding to the controversy is an exemption for “total compensation,” which would allow employers to pay a lower hourly wage if their employee’s total pay is at least $15 an hour. Naturally, that exemption allows restaurants, and other businesses that have employees who earn tips, to pay less.

While restaurant owners spoke favorably of the exemption, unions and groups representing low-income families said it would take advantage of some low-wage earners. Labor groups questioned the legality of the exemption, arguing that no other California city has enacted a total compensation clause in their minimum wage increases.

The mayor was quick to praise the proposal as “a balanced plan,” arguing that “no one received everything they wanted.” However, low-income workers and unions members stormed out of the council chambers yelling “shame” and demanding $15 an hour.

Labor groups believe they have the support of the voters at 58 percent for a $15 an hour minimum wage raised over a three-year period, with support of $13.50 an hour at 70 percent, according to a poll commissioned by those labor groups.

As we have reported in the past, local leaders have been pushing for a $15 an hour minimum wage in Sacramento and Davis. The question now is whether they will go to ballot box.

The Sacramento task force decision comes a week after lawmakers declined to take up a bill that would have raised California’s minimum wage statewide to $13 and tie future increases to inflation. That marks the second straight year that the Democratic-led state legislature has declined to pass a stronger minimum wage hike.

The Assembly Appropriations Committee did not take up SB3 by Sen. Mark Leno. Assemblymember Jimmy Gomez, who chairs the committee, indicating that they will look at a range of options, including setting regional minimum wages.

“Any further study or delay of such an increase undermines working Californians who deserve to be paid a living wage. It should not be legal to pay sub-poverty wages in our state, and we must act soon to lift our communities out of poverty and to boost our economy,” Senator Mark Leno said in a statement. “Our intent is to pass our amended version of the bill to the governor’s desk in January.”

In the meantime, Assembly Speaker Toni Atkins indicated that California’s minimum wage should go higher. However, she is not sold on the Assembly Bill, stating instead, “We need a path to $15 and beyond.” She is looking towards the Legislative Analyst’s Office to help develop options for increasing the minimum wage.

Despite the setbacks regionally and statewide, the issue of minimum wage and income inequality appears to have legs.

Recently a number of UNITE HERE representatives lobbied the Davis City Council on the issue of wages for hotel workers at a proposed Embassy Suites site.

As Francisco Garcia put it, “I’ve seen the difference between non-union jobs with minimum wage and the good union job I have today.”

He explained, “All we’re asking for is workers at this future Embassy Suite have the right to choose. We just want the owner to agree to not run a campaign of intimidation against them and to respect the majority choice of whether to have a union or not.” He said he was not asking the council to vote yes or no on the project, just to think about the employees to ensure they have labor peace.

While the council could not tie an approval of land use considerations to wages, the council made it clear that they were supportive of labor agreements.

Mayor Dan Wolk stated, “I found what has been said very compelling.” He continued, “The issue of poverty and income inequality are major issues, not just in our state and region, but locally.”

Mayor Wolk made it clear that “all the folks are asking for is the card-check neutrality, the ability to organize. We cannot condition this project tonight on requiring the applicant (to negotiate), but we can send a strong signal.”

“It seems very reasonable to me,” he said. “I’m very supportive of the project but I am very cognizant of the concerns that are being brought up about what the workers are going to earn. These are some of the lowest paid jobs in our society – and we as a council need to be cognizant of that.”

In the meantime, activists continue to push for a local ordinance on minimum wage – and, while they had a setback last year, the momentum continues to grow. In June, a number of speakers pushed for the city to follow the leads of Seattle, San Francisco, and Los Angeles and implement a gradually rising minimum wage to reach $15/hour.

The speakers argued that increases in the minimum wage paid in Davis would bring many working poor out of poverty, in addition to stimulating the local economy.