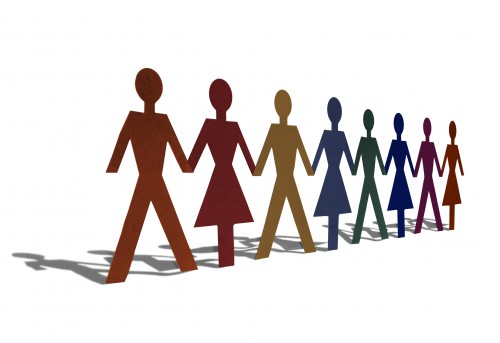 There is an interesting debate in society as to the best approach to solve racial tensions and discrimination. On the one hand is the notion that we should strive to be a colorblind society. This seems to derive from (I would argue, a misunderstanding of) Martin Luther King’s speech where he states, “I have a dream that my four little children will one day live in a nation where they will not be judged by the color of their skin but by the content of their character.”

However, as Adia Harvey Wingfield writes in this week’s Atlantic, sociologists are critical that colorblindness as an ideology is the means to remedy a history of racism.

Part of the problem, they argue, is that “the refusal to take public note of race actually allows people to ignore manifestations of persistent discrimination.”

On the other hand, Conor Friedersdorf argues in the same publication a week earlier that “the left’s attack on color-blindness goes too far.”

While I tend to agree with the view that colorblindness is a convenient filter allowing us to ignore present manifestations of discrimination as well as the institutionalization of unconscious forms of discrimination, I think Mr. Friedersdorft raises a lot of important points we should not ignore.

He writes, “When I was growing up in Republican Orange County during the Reagan and Bush Administrations, lots of white parents sat their kids in front of The Cosby Show, explained that black people are just like white people, and inveighed against judging anyone by the color of their skin rather than the content of their character. The approach didn’t convey the full reality of race as minorities experience it. But it represented a significant generational improvement in race relations.”

Mr. Friedersdorf notes that the academic left had recast that approach as itself a form of “racial animus” where he writes, “colorblindness is considered a ‘micro-aggression’ at UCLA.”

This certainly represents a reasonable view of colorblindness – though not really how it is taught today. This is a point he recognizes well when he writes, “Having savaged that straw man, critics of colorblindness mostly don’t engage the more sophisticated version of the viewpoint: a recognition that race matters very much to the world as it presently exists, coupled with the beliefs that colorblindness is a goal that we ought to strive toward and that, all else being equal, race-neutral policies are preferable in a pluralistic country, even if various race-specific remedies are still necessary today.”

Mr. Friedersdoft adds, “Ensconced in campus bubbles, the academic left also underestimates how divisive it can be to put anything other than individualism at the center of identity.”

On the one hand, he notes, “A decade ago, when I lived at a liberal arts college, I’d have said that the worst flaw of the academic left’s approach to race was its tendency to mistreat blacks, Hispanics, and Asians who didn’t fit leftist stereotypes of ‘person of color.’”

Today, he writes, “I’m more concerned by the conceit, popularized on campus and spreading among activists, journalists, and diversity professionals, that racial justice is best pursued by encouraging white people to reflect on, interrogate, and identify more fully with their whiteness. This approach strikes me as naive and dangerous.”

His concern is, instead, that “the overall effect of encouraging white people to put whiteness rather than color-blindness or individualism at the center of their identity will be to swell and empower a faction in U.S. politics that Trump’s rise has helped to highlight.”

He cites evidence that white nationalists are a tiny but alarming part of the Donald Trump supporter base.

It is not that Donald Trump himself is a white nationalist, but rather that Mr. Trump reflects “an unconscious vision that white people have—that their grandchildren might be a hated minority in their own country. I think that scares us. They probably aren’t able to articulate it. I think it’s there. I think that, to a great degree, explains the Trump phenomenon. I think he is the one person who can tap into it.”

I think Mr. Friedersdorf probably stretches this point too far. He writes, “Even the most naive iteration of colorblindness looks damned good next to the subset of people who’ve interrogated their whiteness and then embraced white supremacy or separatism. The academic left casts all proponents of color-blindness as naive. Perhaps they’re correct that the ideal of colorblindness alone will never bring about an America where anti-black racism is no more prevalent than anti-Irish racism is today. But isn’t it more naive to imagine that masses of white people will identify more strongly with their racial tribe and then sacrifice the interests of that tribe?”

In responding to Mr. Friedersdorf, Adia Harvey Wingfield cites the work of Eduardo Bonilla-Silva who “has written extensively about the idea of colorblindness, charting the ways that it functions as an ideology that legitimizes specific practices that maintain racial inequalities—police brutality, housing discrimination, voter disenfranchisement, and others.”

She writes that the book by Bonilla-Silva, Racism Without Racists “is part of a broad set of sociological research that draws attention to the ways that colorblind ideology undergirds bigger, more problematic social issues.”

Ms. Wingfield writes, “Friedersdorf also contends that they waste time picking apart this concept rather than addressing ‘macroagressions’ like police brutality and growing expressions of virulent racist hatred.  But Bonilla-Silva, among others, describes the ways that colorblindness sustains these very macroaggressions that Friedersdorf thinks are ignored.”

She adds, “In other words, Friedersdorf suggests the academic left wastes time dissecting the concept of colorblindness, and would be better served focusing on more pressing, systemic processes of inequality. But a careful read of sociological literature in this area finds that there are more than a few members of the ‘academic left’ who argue that colorblindness is problematic precisely because it offers a way to avoid addressing these exact social problems.”

That is my fundamental problem as well. Colorblindness is something to strive toward, but it easily becomes a way of avoiding addressing the underlying social problems.

This inequality at its core is a problem more in line with institutionalized discrimination and unconscious bias than overt racism.

As Ms. Wingfield notes, “For the first half of the 20th century, it was perfectly legal to deny blacks (and other racial minorities) access to housing, jobs, voting, and other rights based explicitly on race. Civil-rights reforms rendered these practices illegal. Laws now bar practices that previously maintained racial inequality, like redlining, segregation, or openly refusing to rent or sell real estate to black Americans.”

However, she argues, “Yet discrimination still persists, operating through a combination of social, economic, and institutional practices.”

She continues, saying that “it is no longer socially acceptable in many quarters to identify oneself as racist. Instead, many Americans purport not to see color. However, their colorblindness comes at a cost. By claiming that they do not see race, they also can avert their eyes from the ways in which well-meaning people engage in practices that reproduce neighborhood and school segregation, rely on ‘soft skills’ in ways that disadvantage racial minorities in the job market, and hoard opportunities in ways that reserve access to better jobs for white peers.”

In the end, while I think Conor Friedersdorf makes important points, I agree with Ms. Wingfield that colorblindness in a society that is not colorblind is like an ostrich burying its head in the sand to avoid danger.

Share:
Tags:Color BlindPoliceRacism
Previous : Commentary: Does District Really Need to Cut AIM Program in Half?
Next : My View: What is Best For Our Kids?

12 thoughts on “My View II: Does Color-Blindness Offer a Barrier to Addressing Discrimination?”